An Beannachán, The Terminal Mark, The Horned and Hornless... 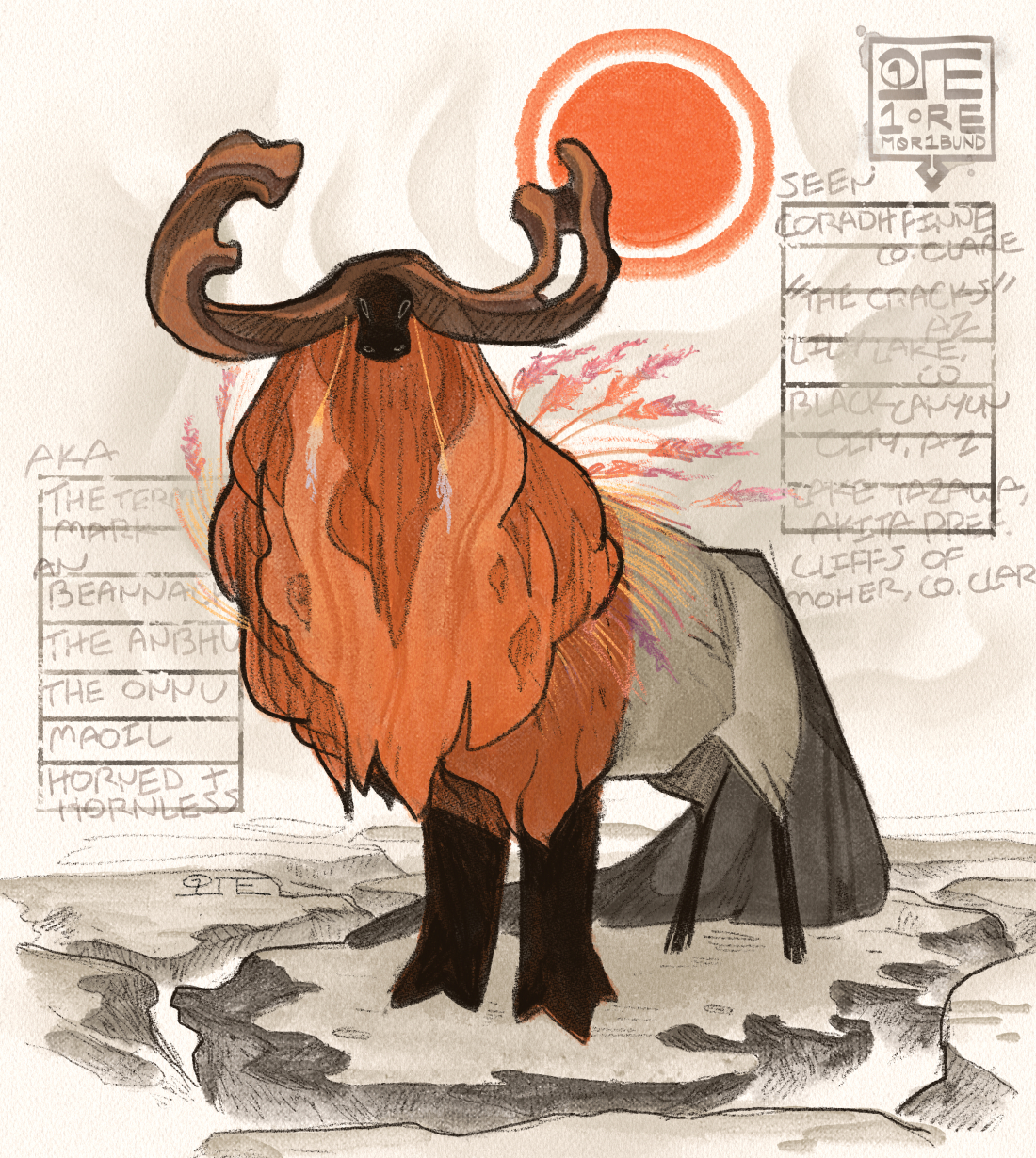 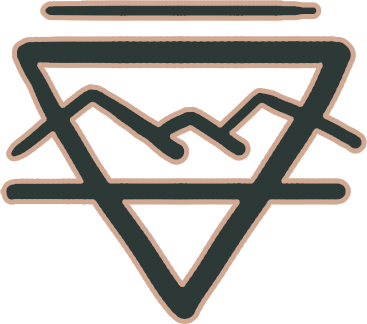 You will know it when you see it.
It is the baying of hounds, and the braying of mules,
and the taste of copper in your mouth.

A ghost of the hunt, haunting the Burren of Ireland (and all the world's karsts) since time out of memory.

She’s a ghost of many names, none of which she has language for.

Even among esk, Beannach is more natural phenomenon than ghost. Not much is known of her creation; her roots go down for years in the Burren of Ireland, but sightings of her are scattered all across the world’s mountains and karsts.

What is known is that she’s a child of the chase. The hunt mothered the Onnu, plucked her from the push-pull reciprocity of salmon and bear, lark and leafhopper, trapper and quarry. Maoil is a common sight among prey animals, and while she is generally accepted by the critters she roams with, the world knows that her presence may signal the chase at any time. After all, where she goes, the hunt is never far.

The Anbhu is pursued indiscriminately by all creatures who hunt game of her size, humans and animals alike. In the heat of the moment, she may be taken for a strange-headed elk, a great beast of legend, or a scientific curiosity. But those who choose to pursue her are in for the hunt of their lives. The Anbhu is full of tricks, and she is known to lead would-be hunters astray into terra incognita.

Those who are quick of draw, sharp of mind, and kind of heart might just get lucky, though. An Beannachán gladly rewards those who catch her eye—and are skilled enough to rout her. She may feed animals with her ghostly body, or offer up her “horns” as tokens of gratitude to humans. Some ghosts have even given chase, and found a glad-hearted friend at the other end of it.

She has taught much kindness, this way. Those who chase the Horned One inevitably come away changed by the experience, often for the better. She, too, keeps a place in her heart for those she provides for, and in turn enjoys the protection of scattered human communities who know her as neighbor and friend. From there, tales of a legendary horned beast have been told since time out of memory.

These stories were born from years of kindness. But as time goes on, the Onnu has learned that this attention is not always good. Stories of great beasts inevitably attract those looking for adventure… and those of wealth, power, and “greatness.” She is a good judge of character and a canny trickster, but even a spirit as old as she can’t outwit the twists and turns of time.

It’s a bitter thing to reconcile with years of compassion—that The Powers That Be often take through force the gifts they cannot win fairly.

Though Beannach wanders the world over, she can often be found at her haunt, which lies within the Burren of Ireland. This is a vast landscape of karst, meadow, and woodland, with a rich history of human habitation.

It isn’t poetry to say that the Burren mothered its people, in the same breath that its people mothered the Burren. Human habitation created dramatic environmental changes here. Where there once was dense woodland, the Neolithic brought with it deforestation and heavy agriculture. The whole Burren went through a reckoning, topsoil stripped from the rock underneath. What remained was a sweeping vista of bare karst… Which now harbors some of the greatest biodiversity seen in Ireland.

Due to the Burren’s unique history, plants that would normally favor alpine or arctic climes can be found alongside plants from Ireland’s lower, warmer climes. Some 70% of Ireland’s native plants can be found here, with several endemic species that are only found within the Burren.

There is ongoing conversation over how to steward this area for the future. The Burren exists in its weird, wild, and wonderful diversity because of human intervention—which sometimes ended in disaster, and sometimes in small miracles. Whatever the way forward, the Burren poses interesting questions about our place in the natural world. 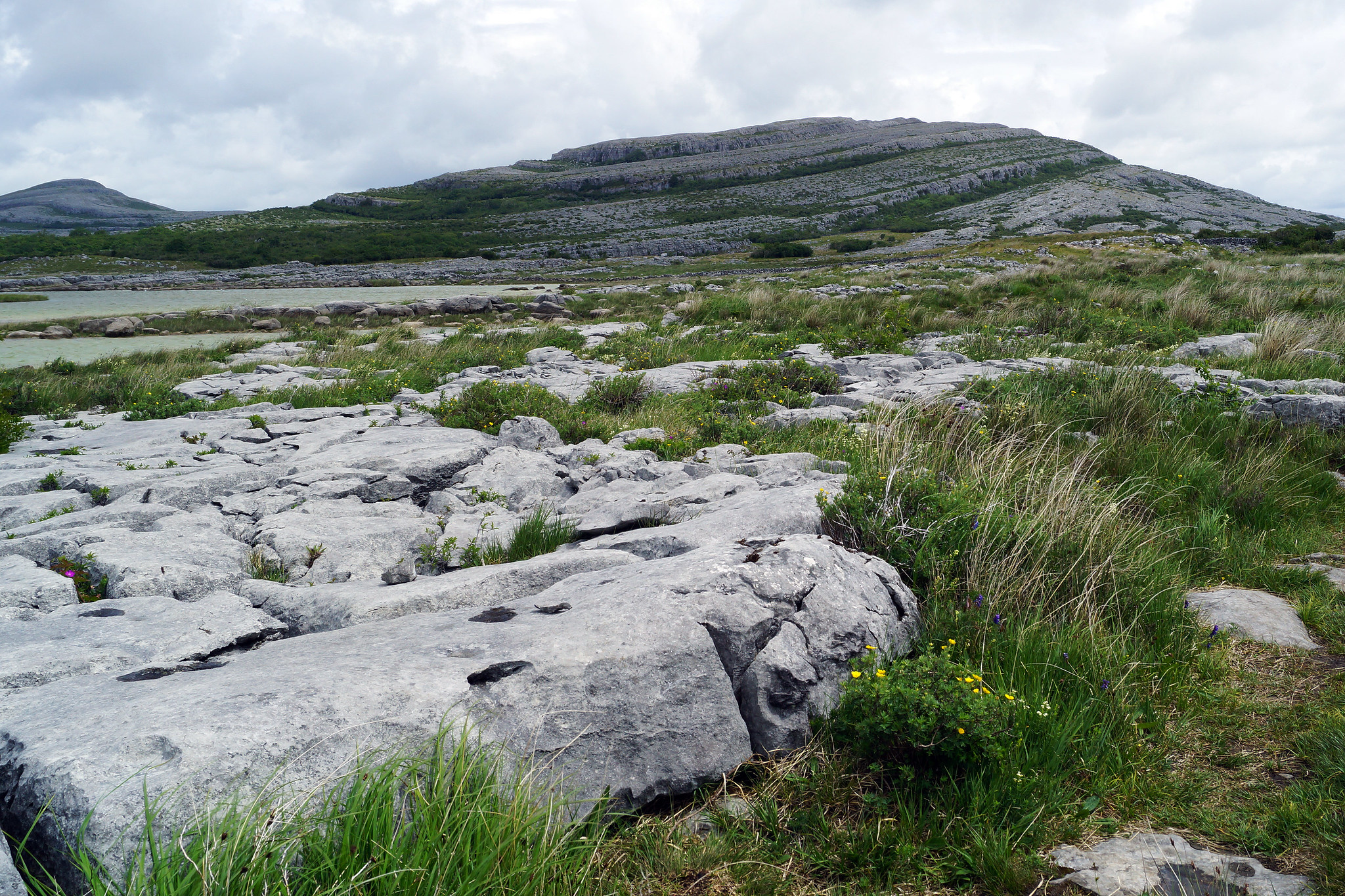 Walls of the Burren © Michael Foley 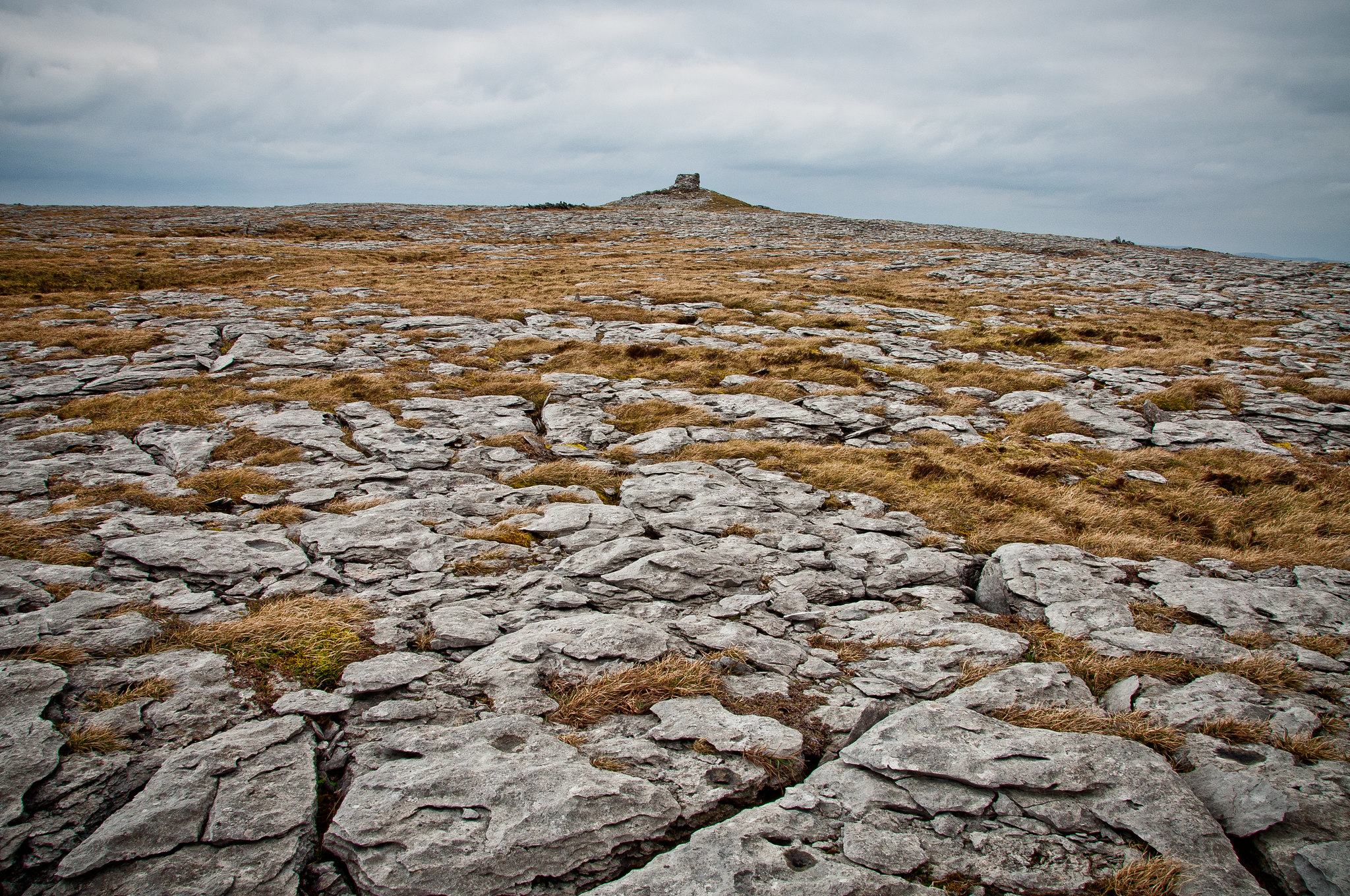 Cailcfhéar ◆ Crested Hair-grass ◆ Prairie Junegrass ◆ Koeleria macrantha is distributed widely throughout the northern hemisphere. In the Burren, it occurs on karst limestone, karst meadows, shorelines, and other rocky places. It particularly likes forming meadows and prairies in other parts of the world, but can find its niche in a variety of places. 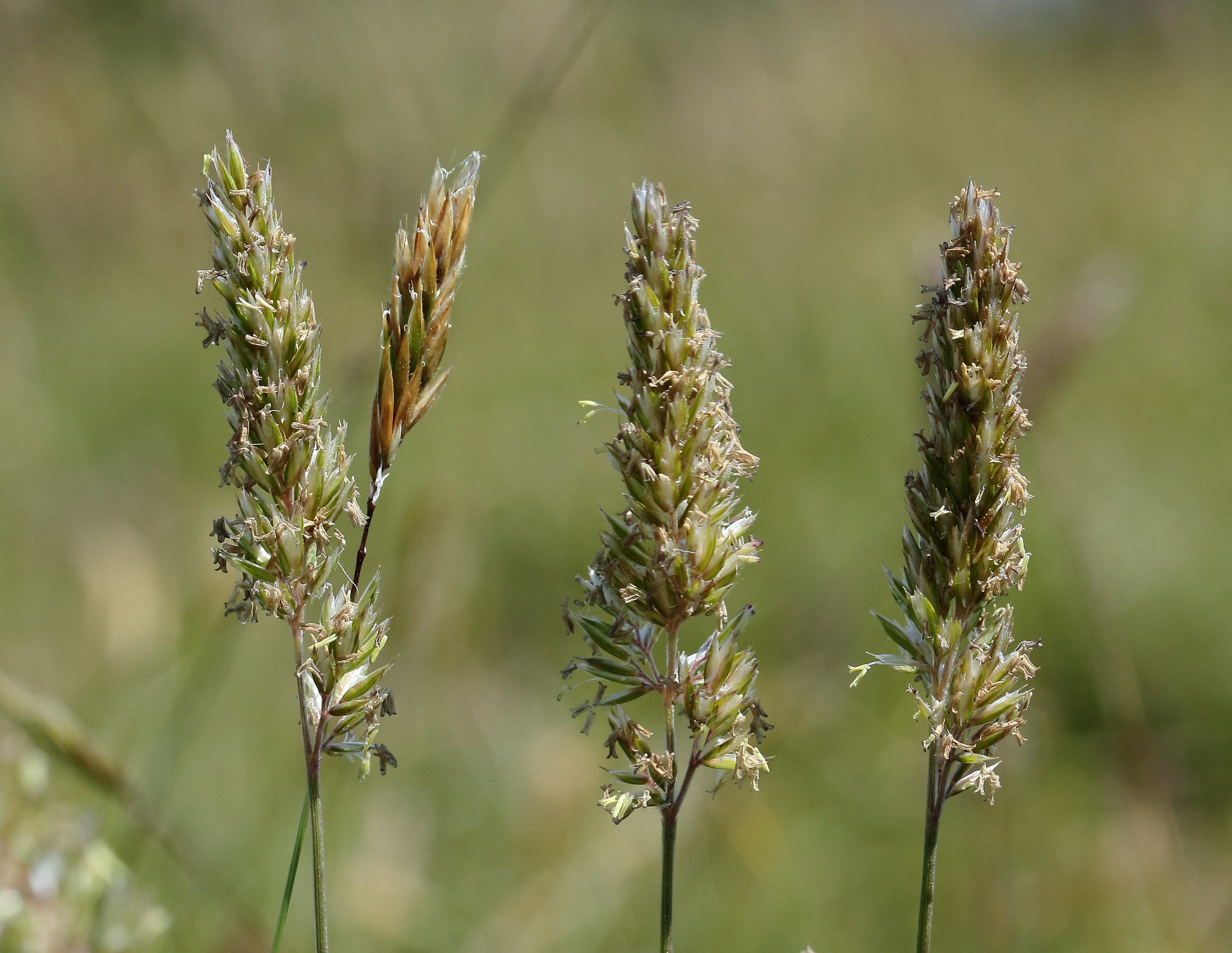 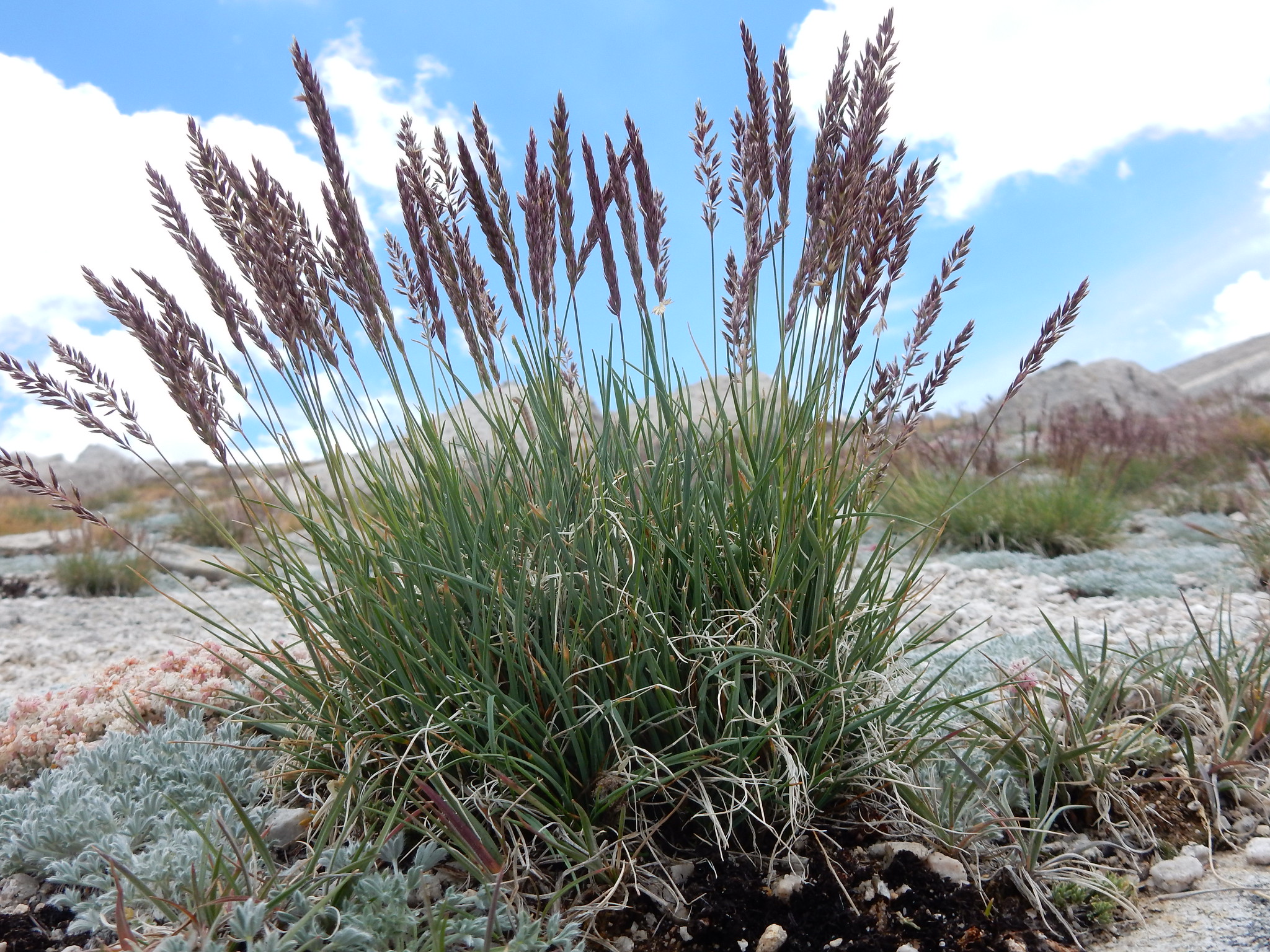 Heartwood is the innermost section of a tree’s trunk, and is formed by many (though not all) tree species. It’s the hardiest and most weather-resistant part of the tree, used to store certain chemical compounds which make it more resistant to decay. Often there is a change in color between the surrounding sapwood and the inner heartwood, with one being darker than the other. 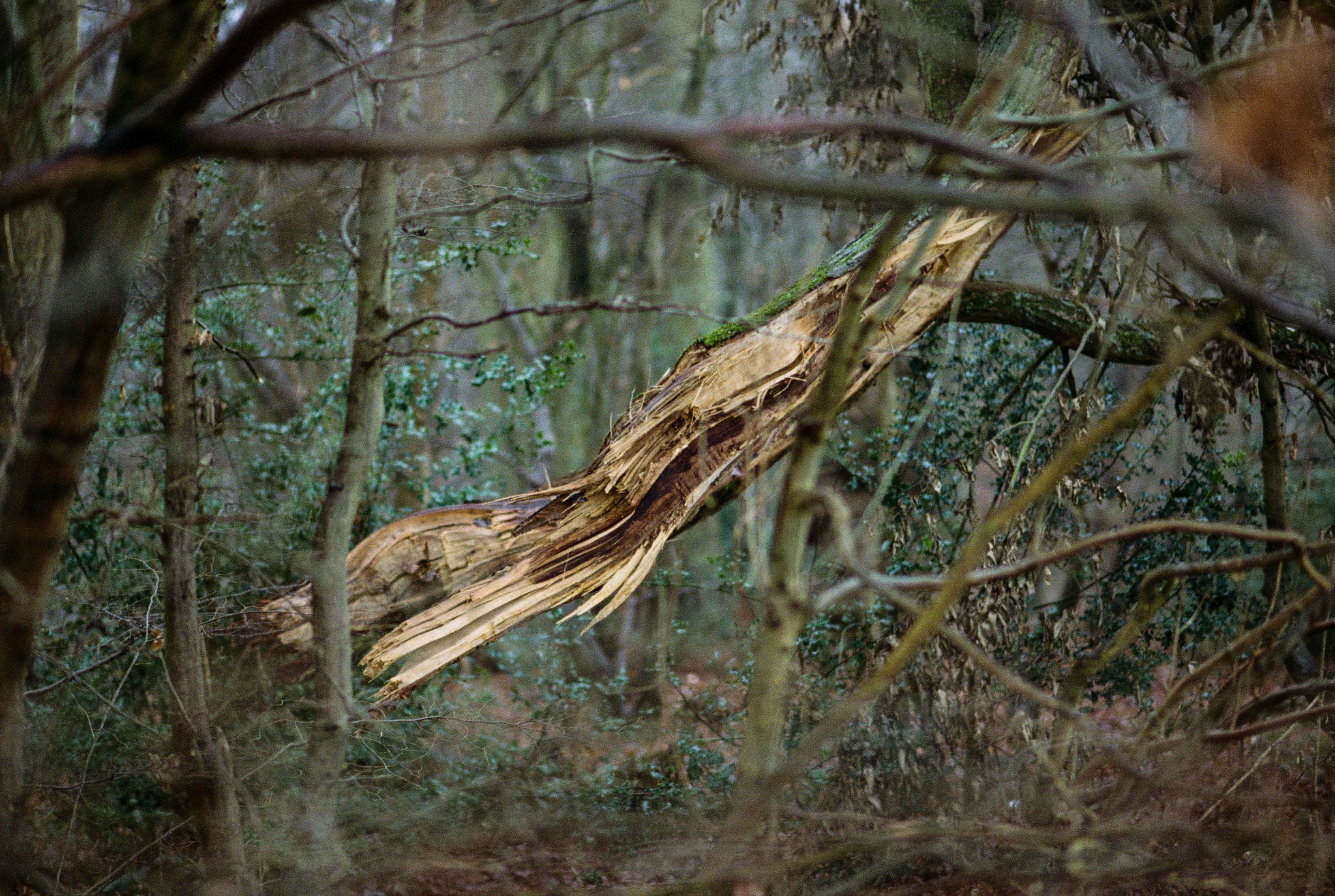 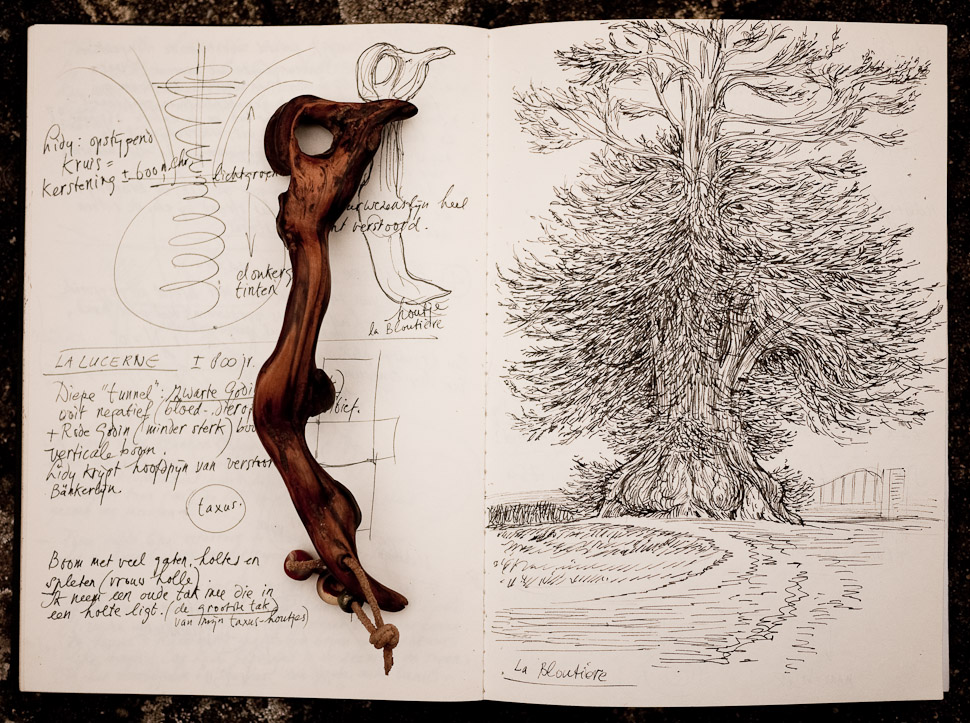 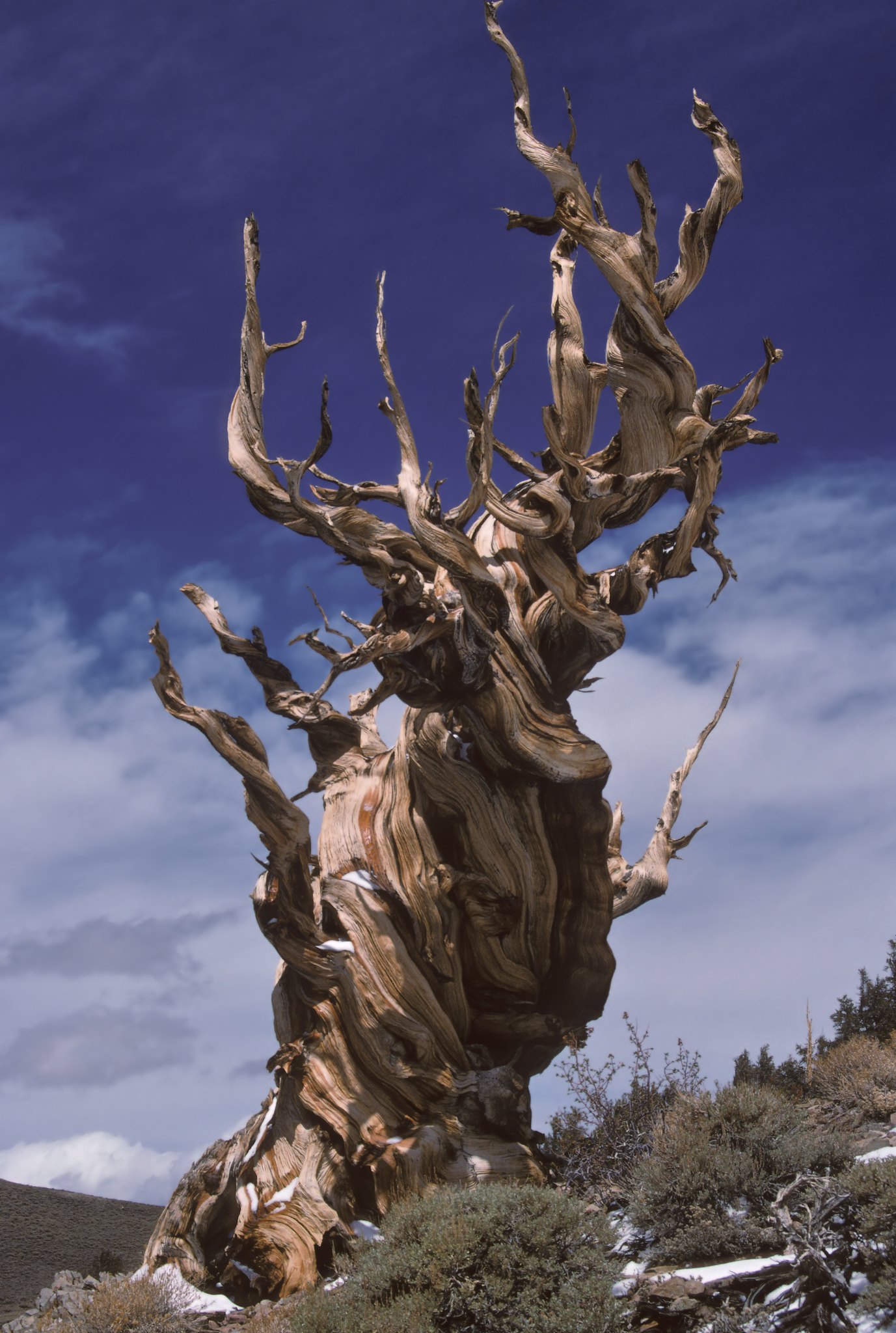 Beannach’s heartwood “horns” are weathered by exposure and take on a variety of different shapes and sizes. Each time she drops them and grows new ones, they might take a new shape. She may also have one or both “antlers” broken or stunted. Have fun with it!

Maoil's maker, long unknown to her.

Not much is known of their relationship. The sound of Gealach's name provokes only a stony stare from Beannach. It's hard to say if the name means anything to her, or if the wry old spirit simply chooses to hide behind a language barrier. Either way, keen ghosts that find An Beannachán too opaque—or too unsettling—may realize that they can always rely on old Gealach to make sense of things.

But when asked about the strange-headed stag, Gealach becomes very quiet. If at all she speaks, it is wrapped in verse:

... The most senior of all Ireland’s stags—Beannán of well-filled Tara—was in the third allocated to Goll; a stag no one could hunt successfully.

Clann Morna’s hounds, ever accustomed to successful hunts, were regularly reddened with blood when chasing the notorious stag throughout the wastelands of Magh bhFionn.

Though there were many hounds around her, on the margins of that hunting assembly, by her alone fell the stag that never panicked at the baying of hounds...

Perhaps this is for the best. Gealach knows what came before, and it was not so kind. 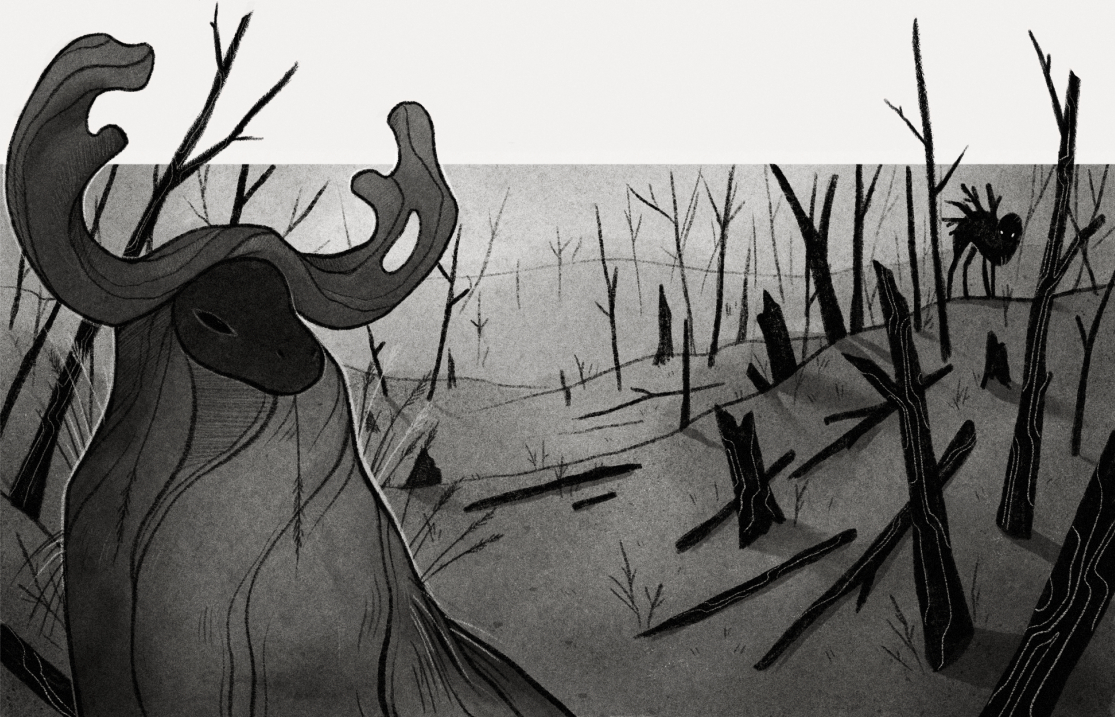 Most would consider Beannach a bad traveling companion. Not to say that she is cold-hearted or asocial, but her heart lies with the hunt, and she doesn't cultivate what most would consider to be a "social afterlife."

She is incommunicative, opaque, and largely uninvolved with the affairs of esk. During meetings with other esk, she might suddenly take off in an arbitrary direction, or vanish into the night, only to reappear years later. The vast majority of ghosts will encounter her thundering through the wilds after god-knows-what, and come away thinking that she is a strange natural phenomenon with no sense of self at all.

Still, some ghosts have caught her eye. She is easy company to esk who remember what it is like to flock together as a herd or pack. She might also be familiar to those who were hunters, fishers, shepherds, or field scientists in life.

And then there are those who have gone on the wild chase with her. They would hesitate to call themselves her friend, but they may well be the closest thing to it.

The Anbhu delights in giving back to the world around her. She keeps a careful eye on hunters the world over—particularly humans and their quarry.

Among the living, she is best known for leading would-be hunters on wild hunts. Many a woodsman has gone missing in the mountains for days, only to return home with a strange, wooden horn and the story of a lifetime. Many more have heard these stories and launched their own search for the legendary beast, only to turn up nothing.

And then there are those who have tracked the beast with sickness in their hearts, seeking to exploit her gifts. She is called "The Terminal Mark" for a reason. It's not unheard of that these pursuits end in tragedy—many have lost themselves beyond recovery to the hunt.

Nobody knows for sure what awaits at the end of the chase, though. Stories of the Onnu are often taken with wild speculation, the creature bestowing blessings that range from powerful medicines, to secret knowledge, to riches and treasure, to eternal life. Some esk think it may be a transformation, though no ghost has volunteered the Anbhu as their maker.

In reality, the gifts she gives are as incomprehensible as she is. They certainly seem to mean something to those that recieve them, though.

Note: This list is incomplete! If you have used the Onnu as a character in your stories, just let me know and I can add a little blurb.

Note: Feel free to craft your own regional names for the Anbhu. However, please don’t model them after existing beings in folklore or religion.

Feel free to reach out if you would like to use the Anbhu as a character in your works. In general, she is more force of nature than she is an individual. Every so often, though, a turn of the head or a timely snort will reveal a wry old spirit with a huge heart—and many tricks up her sleeve.

When depicting Beannach, please respect her roots in the Burren and honor the area and its people as best you can. While wrapped in legend, the Anbhu is strictly a neighbor-ghost and not a revered spirit or deity. Please do not conflate her with existing beings in any of the world’s religions or folklore; she should not be confused with them or used to “explain” them, they are part of living traditions that should be respected.

Feel free to reach out if any of my works don’t agree with the guidelines I’ve set out here. Thank you!

Maoil cannot be used as a creator esk at this time. This is subject to change in the future... 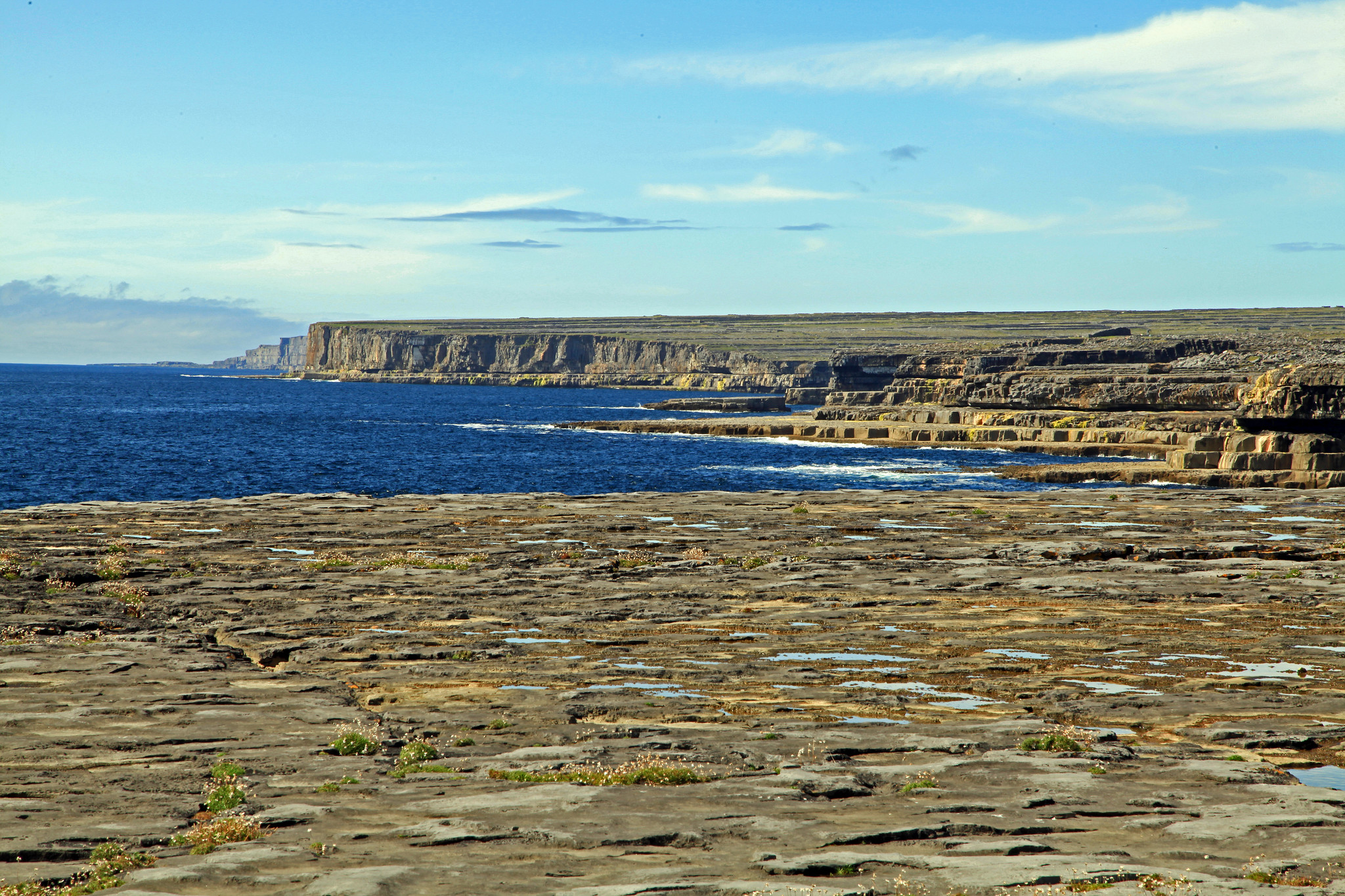 Where the Burren meets the North Atlantic. Photo by Graham Higgs