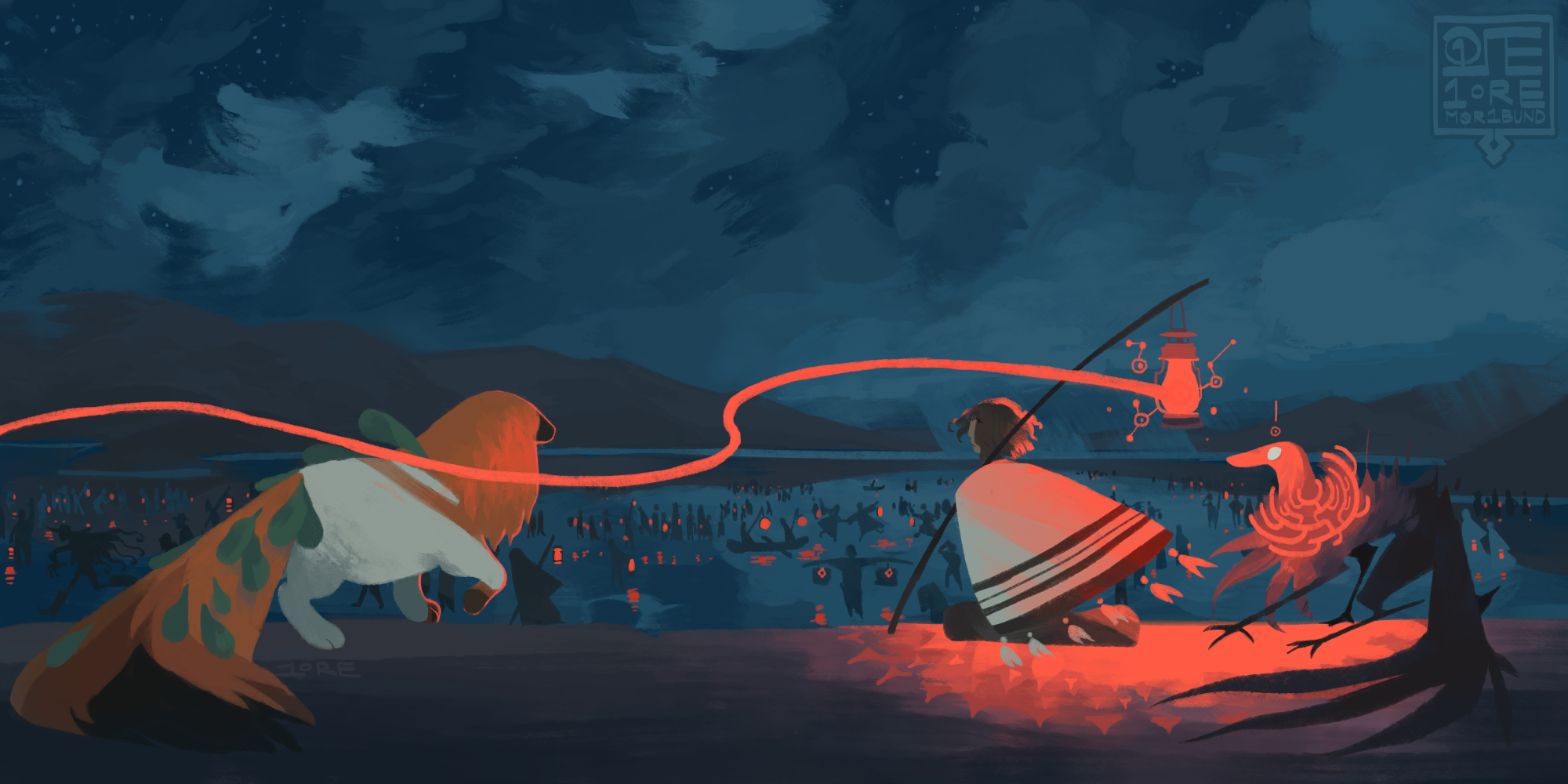 [Long Description: … He steps out of his memories, and into the real world.

The summit of the dam overlooks an enormous reservoir. Nothing is remarkable about a night such as tonight, except maybe the rain… and the hundred-odd ghosts dancing on the surface of the water. They carry lanterns, lighters, torches, lamps, flashlights—whatever they can get their hands on— performing a twinkling light show on the water.

Heath’s eyes aren’t on the reservoir ghosts, though. Perched up on the dam is Senna, who’s equal parts stunned and exasperated to see Heath again.

And she has company. The ghost of Isaac sits on the edge, with a lantern propped up on the end of a staff. He and Heath exchange a tense look.]

“Look who decided to show up.”

Heath is panting too hard to think. He registers the sound of Isaac’s voice and not much else.

“You disappeared! We’ve been looking everywhere for you.”

Heath looks up. The lip of the dam comes into view just as he catches his breath. Senna stands opposite of him, hackles raised like a javelina. The reservoir is full of color and light, tonight, and Heath doesn’t need to get a good look at it to guess why. The so-called “night parade of a hundred ghosts” is out in force.

And then there’s him.

Isaac sits there, at the edge of the dam. He watches Heath out of the corner of his eye. His expression is unreadable. A cool, rainy downdraft tousles the shawl around his shoulders, forcing him to adjust the staff under his arm. A lamp hangs from the end of it, casting a warm glow on everything around him.

Heath has a tough time even breathing. The rush of finally summiting the dam is wearing off under Isaac’s cold stare. “It's—hard to explain. Think I got a bit lost.”

Senna fixes Heath with a lingering glare. She looks him up and down, snorts loudly, and turns her back on him. He can't even get a word in. She takes off.

Heath watches her trot down the margins of the service road. He knows better than to chase after her, but it takes no small amount of effort to restrain himself. He sighs.

Isaac looks between Heath and Senna's distant silhouette. “She was really worried about you. Never seen her like that.”

The man turns his gaze back to the reservoir. The wind breathes down on them both. Isaac unhitches the lamp from his staff and sets it in his lap, carefully sheltered from the breeze.

“Not like you to pull a disappearing act. Not on her, anyway.”

It occurs to Heath that he isn’t sure which disappearing act he’s talking about. A stone forms in his throat.

“Isaac, I’m—” Heath stops himself. A thin, ragged noise escapes his thoughts, as he swallows down the reflex to apologize. Isaac doesn’t look at him. Heath isn’t sure if that’s a good thing or a bad thing.

He collects his thoughts and tries again. “Actually… Do you think we could talk?”

Isaac blanches. He almost loses the lantern, glass rattling precariously as it slips between his hands. He makes a face at Heath. “Yeah? Sure? Why don’t you go collect your daughter, first.”

Isaac raises an eyebrow at him.

Heath holds his tongue. He has no defense for that. Although Isaac’s humor is welcome, he can’t help but notice its convenience. If the man wants to get rid of him, he could just ask.

Isaac whistles through his teeth. “If you had to ask, I probably shouldn’t say no.”

“Isaac…” Heath shifts on his paws. “It doesn’t sound like you want to.”

Isaac says nothing. He studies the lamp in his lap, the light staining his calloused palms an orangey-pink as he fiddles idly with the handle.

“No, I do.” Isaac says, at last. “I guess I’m just surprised. You haven’t wanted to ‘talk’ in, what, 30 years? And then you show up looking at me like I’m a confessional booth. Forgive me for thinking this is… Sudden.”

Heath doesn’t know what to say to that.

He studies Isaac, for a while. Death has a funny way of drawing time into a man’s face. Isaac looks as young and spry as the day they first met, and yet he’s every inch a 100-year old ghost who crawled out of a river, one day. The shawl and lamp are new to Heath, and so is the far-eyed stare that Isaac watches the reservoir with.

It starts in his belly: A low, musical note that bubbles up through his lungs and into his throat, until he’s open-mouthed cackling. He covers his mouth, eyes wrinkled with delight.

The sound is like cool spring water to Heath. He stares at Isaac, equal parts bemused and amused. “What are you laughing about?”

The man shakes his head. Delight lingers on his features for a while, colored by the lamplight and his own warmth. But as time goes on, trepidation seeps in. Laugh lines bleed into stress lines. The light dances, and Heath swears he sees a flicker of fear behind Isaac’s eyes.

Isaac sighs. “I’m giving you a hard time. I wouldn’t want to talk about all this, either.”

A woman’s voice, dry and throaty, echoes off of the embankment. Isaac looks down at the shoreline. Heath follows his eyes.

A ghost stands on the water, holding her arms akimbo. “What does it look like out there?”

Isaac casts a casual glance over his shoulder, down the other side of the dam. He raises his hand and makes a middling gesture at her. “Give it 15 more minutes.”

The woman nods up at him. She turns and negotiates her way through the waves, joining the glittering procession of ghosts out on the reservoir.

Isaac rises. “Look—I’ve got my hands full tonight, and you’re busy with Senna…”

The stone in Heath’s throat becomes uncomfortably hot. His breath burns through his nose, ragged and warm. ‘Another time,’ he thinks. He and Isaac both know there won’t be another time.

Isaac stops. He makes a motion like he's going to leave, but he hesitates there, at the edge of the dam. His shawl flutters with the lamplight. In one smooth motion, he turns on his heel and faces Heath.

I firmly maintain that reservoirs are deeply haunted places. Happy to revisit this concept, hopefully in a more elegant form at some point.

Anyway waow. that’s it. quest’s done! Thanks for coming along on this purely self indulgent nonsense journey. Your prize is this heath playlist i.e. the same 16 songs I've been listening to on quick rotation since the 6th, in no particular order. I'm gonna go sleep for a week now. ✌️

No quest prompts here. This is all my nonsense.

Song is "Migration North" by the incomparable June Lalonde.

This paracanonical depiction of ghosts has not been evaluated by Those Who Went Missing staff. This art is not intended to depict, expand upon, contribute to, or reflect any lore. 😉