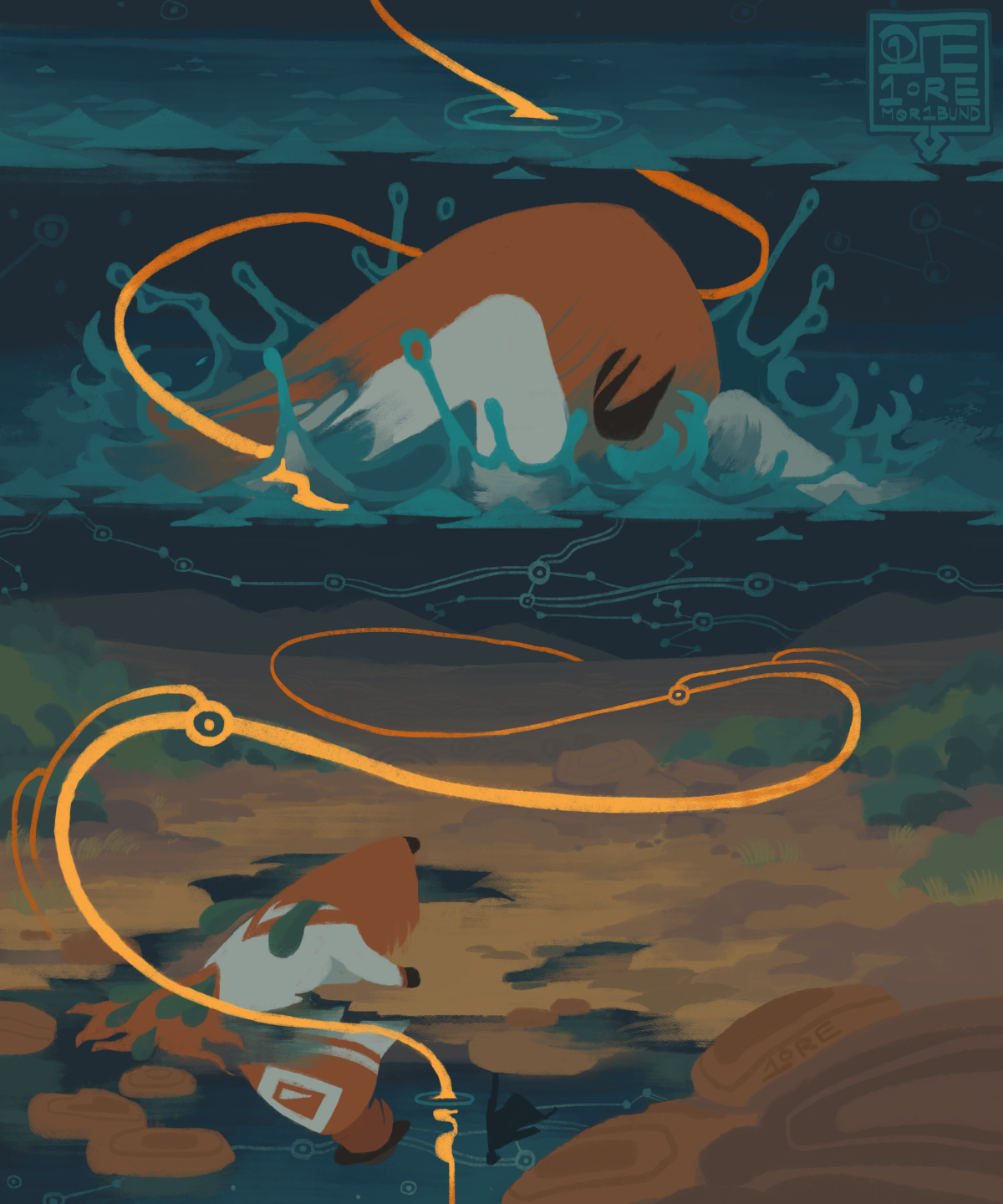 [Long Description: Heath swims through his memories, struggling to come back up for air. He breaches the water.

The place that he emerges is not the place that he fell in. He stands in a dry riverbed, dragging himself out of a few puddles of water. An embankment dam cuts across the skyline, the stars dancing in a web of constellations above his head. His reflection in the water gazes at the skyline, where another figure stands in the distance.]

The First Hurt pg. 5
[Soulsong - A Moment of Connection]

It’s fitting that Heath should surface here. He’s determined to find his footing back in the real world, to find his way home, but it’s hard. The water delivers him to the banks of a ghost river, horizon drawn by an earthen dam.

This time, he almost doesn’t recognize it. He watches the lights dance in the sky, and he realizes that he stands under the confluence of two rivers. The Colorado, stealing East from her banks through 100-odd miles of canals, and the Agua Fria, impounded and aching to flow faithfully to the Salt River’s arms. As he watches them—two foreigners co-mingling in the reservoir where they make their grave—a thought occurs to him.

If he had not gone East, would he have ever met Isaac?

Had it not been for Coyote’s meddling in the Third World, Eve’s long exile, the Big Bang, this awful dam—that first wound—would they be here at all?

The question troubles him. Whose future is buried under the rammed earth? Drowned with the river? They suffer, and for what? So that two men could salvage a few good years from the waste? ‘What a mess,’ Heath thinks. He traces each wound in his mind, long years of exile, drought, floods, and death. If not for them, he and Isaac might not exist at all.

And yet he can hear the man protesting in the back of his mind.

“Do we owe our life to the wound?” he asks. “Or are we alive despite the wound?”

Not even Heath gets to escape my dam bullshit. This is knowledge that’s only relevant to me, but the stars are a map (in extreme squashed perspective) of where the CAP canal splits off from the Colorado and meets the Agua Fria, among other rivers.

With another thanks to the artist of the symbols used throughout the Soulsong quest, they’re so spiffy >:^o I liked that they kind of became emblems of the quest, so these star patterns have been a nod to them.

For the Conservatory Event - Soulsong quest. Prompt is "A Moment of Connection," which is part of the Temple of Silence route.