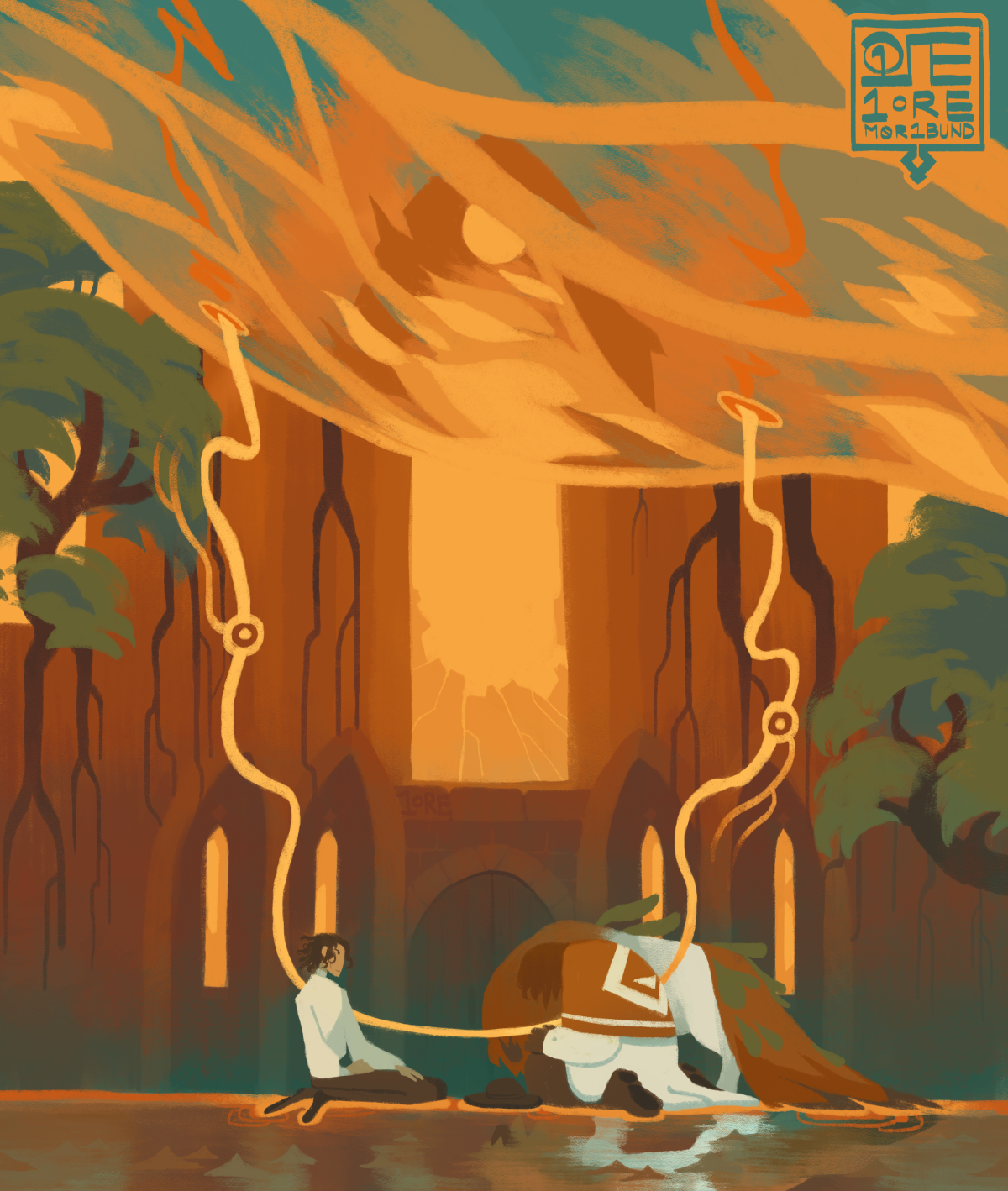 [Long Description: The world solidifies from a mirage into a warm, sunlit church. Twin waterlines stretch across the composition, one forming choppy, playful waves in the ceiling, and the other forming a glassy mirror where the ground should be. Long mesquite taproots creep down the walls and shattered windows, their boughs spilling in from outside.

Heath and his reflection bow their heads, apologizing to Isaac.]

Isaac sits on the surface of the water the same way that he used to sit on their livingroom floor. Heath’s heart wrenches—some things never change. He has to stop himself from thinking about that, or he’ll probably say something embarrassing.

Isaac looks him up and down, and raises an eyebrow. “For what? Almost crashing my niece’s bat mitzvah?”

“That’s the only thing I can think of that you haven’t apologized to me for.”

Heath must be making a face, because Isaac’s smile grows from smirk to shit-eating grin.

“What?” Isaac snorts. “I’m serious. It’s all that’s left. You’ve apologized for everything else.“

The pastor falls silent. He doesn’t have an argument for that.

“… I’m sorry for that, too,” he says, after a while. “I must have forgotten to say something to you. Your family seemed to think it was funny, and you were so busy that night, I—”

“Forgiven. You have a clean slate.” Isaac claps his hand on the leg of his pants with such finality that Heath almost believes him.

But the unsteady silence that follows speaks volumes, and even Isaac’s humor begins to feel brittle. Heath struggles to find his way back to where he started. Where does he even begin? How does he begin? Lucky that Isaac has a way of seeing right through him.

Heath takes a deep breath. It comes out ragged and raw.

Heath’s voice cracks. He makes a pathetic noise, tries to cover it up by clearing his throat, and that’s it—he’s lost his lead entirely. He rakes a hand through his bangs, balling it into a shaky fist.

“God damn it!” He drags his hands down his face. “This is ridiculous. You’re probably not even real.”

“True! I’m a broken facet of your guilty conscience.”

Heath gestures inarticulately at the air. “That’s not helping.”

“This—” Isaac indicates himself with both hands. “This isn't real. But I'm real. And you’re a better judge of people than you think. You always knew what I'd say before I opened my big mouth.”

Heath makes an unintelligible noise into his hands.

“Just say it. I’m not even the real Isaac. If I get mad at you, it’s…” Isaac thumbs his chin, thoughtfully. “Actually, it’s still your fault.”

“I just—” Heath breathes. He lets out a shaky sigh, and finds his way.

“After my time with the Church, after everything I put you through, after we made up… I guess I thought that was it.” He sets his hands in his lap and gazes up at Isaac. “We were happy. I didn’t think we could— I didn’t think this could happen to us again.”

Isaac studies him, for a while. His expression is impossible to read. “What exactly is ‘this,’ Heath?”

Heath points at himself—at the esk.

Heath doesn’t have the heart to smile at his joke. Isaac’s heart doesn’t seem to be in it, either. He studies the water, the humor draining off his face like rain. They share the silence that follows.

“Can I ask you something?” Isaac looks up at him.

“Of course,” Heath breathes. “Anything.”

Isaac’s expression is the same—all the same. Crooked smile, raised brow, lashes you could hang string lights on. But his eyes are sad.

“Do you miss me more than you miss what we had?”

Heath’s breath hitches. His jaw trembles, slightly. He tries and tries, but he can’t get the words to come.

“Think about it,” Isaac says, as he gets up. “If you really want to talk, you know where to find me.”

With thanks to Snoodls for collaborating on this guy (Isaac) and drawing my favorite picture of Heath, ever.

For the Conservatory Event - Soulsong quest. Prompt is "An Apology," which is part of the Temple of Silence route.