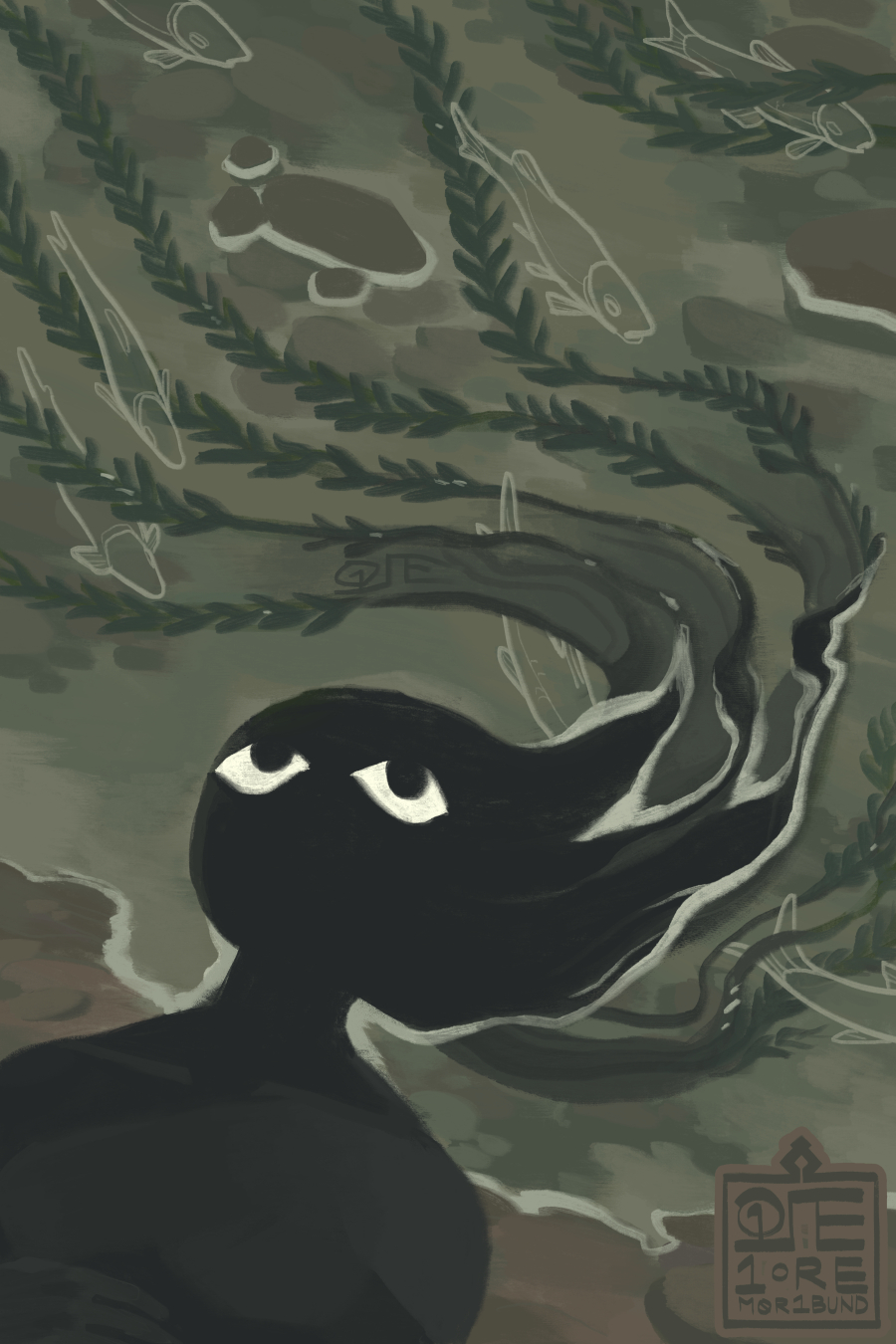 [Long Description: A silhouette lays her head back in a clear stream. Her hair fans out under the water, its furthest ends branching into strands of greater water-moss (Fontinalis antipyretica.) Ghostly outlines of roundtail chubs (Gila robusta) weave through her moss-hair on their way through the stream.]

The moss that stops the fire.

Reflecting on this funny plant… Greater water-moss found me through a series of coincidences, which begin in the TWWM group.

I picked up my esk, 2105, from the in-game greenhouse on a whim. Certain “make-your-own” characters are generated there, which have a few pre-determined traits to prompt you in designing the character. 2105 was written as haunting a “dammed river,” which really called to me, and nobody else seemed to be going after them... But they also carried a plant I had not encountered before, greater water-moss (Fontinalis antipyretica.) I remember furiously websearching whether it was found anywhere in Arizona in the thirty minute window before claims opened, hahahaha.

There is not much information online about greater water-moss in Arizona. SEINet maps exactly one instance of collection, but the U of A Herbarium has some extra observations of their own. They seem to like mountain streams and pools, but there are an odd bunch collected at lower elevations, too. There is so little information about the kinds of habitats that they occur in in the desert, I’m still in the realm of speculation when I write about 2105’s haunt.

Still, this plant’s really grown on me for what I have read about it. I think my favorite thing about greater water-moss is its ability to bioadsorb cadmium and zinc… Without knowing, I had placed 2105 in an area with a long history of mining that haunts its watershed today, in the form of heavy metal contamination. Runoff from old, unremediated mines is a particularly big challenge on the upper Agua Fria watershed, one of the areas that inspired me to pursue environmental science in the first place. The adjacent Verde river, where 2105 is located, faces similar challenges.

Fun fact? Cadmium is one of the most commonly sampled heavy metals in the Agua Fria watershed. (Meanwhile arsenic is the principle metal of interest on the Verde.) So I speculate on what could be : -B mossy cadmium bioremediation? Biosampling? I’m not sure. It’s all speculative. But it’s fun to think about.