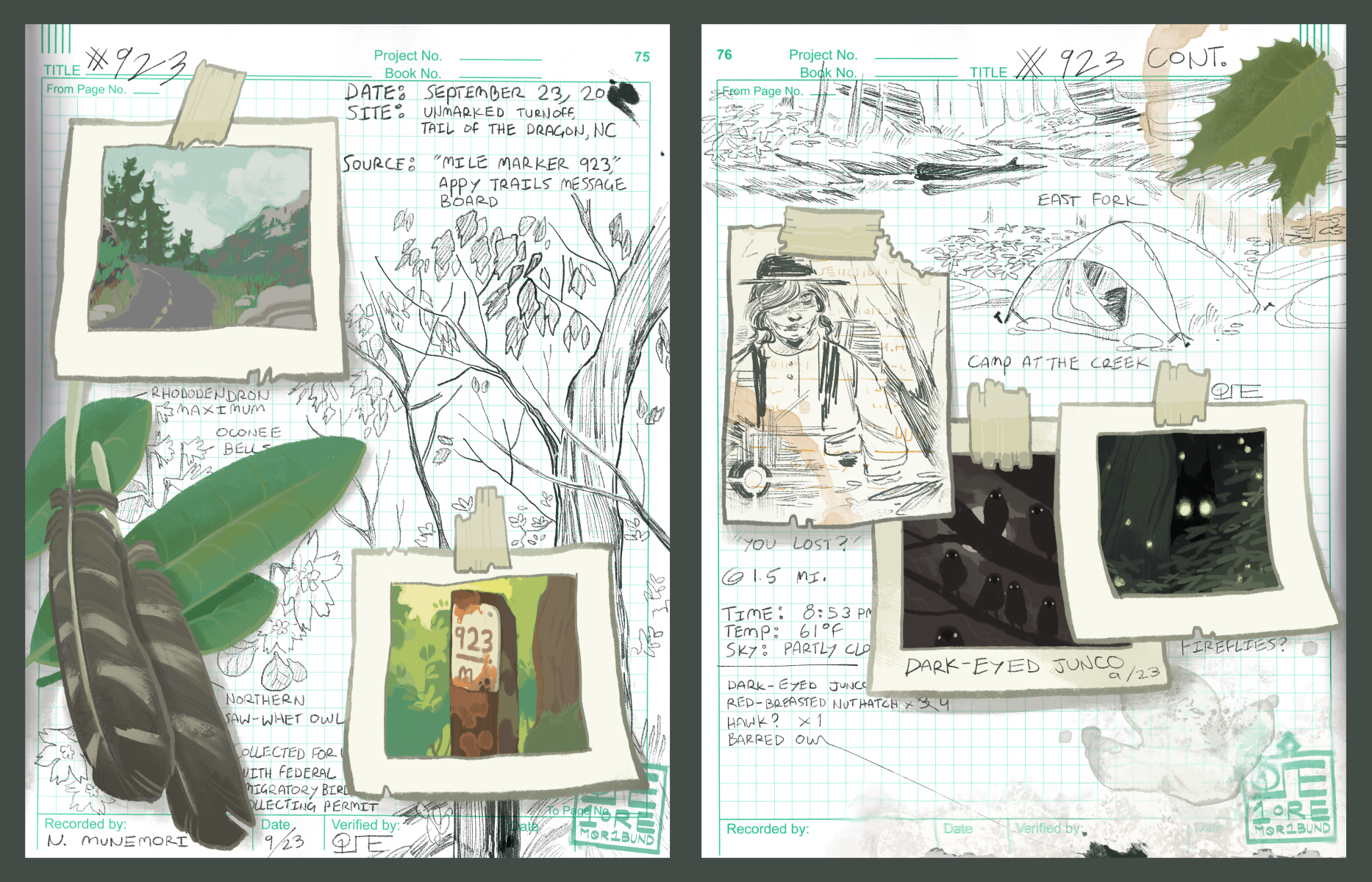 The first page has two photos taped into it, a snapshot of an Appalachian highway and a picture of a rusted mile marker that reads “923.” All around the photos are drawings of various local plants and forested vignettes. A bundle of pressed rhododendron leaves are also enclosed, with (legally collected) northern saw-whet owl feathers.

Notes are scribbled all over the page. Some parts are obscured by the pressed leaves, inkblots, etc. They read:

The second page has two more photos taped into it, along with a scribble on a coffee-stained receipt. One of the photos depicts a gathering of dark-eyed juncos after dark, silhouetted by the moon. Another depicts a gathering of fireflies among the rhododendrons. Two of the flickering lights are rather large, though, and are silhouetted by a big black shape behind a tree.

The drawing on the coffee-stained receipt depicts a ranger, perhaps a member of the Forest Service. She has sharp eyes and a hard-set jaw. Arranged around the enclosed receipt and photos are other drawings, too. A drawing of the wooded creek stretches across the spread, with a sketch of a bank-side tent underneath it. Finally, American chestnut leaves are pressed into the top corner, with a coffee-stained ring around them.

East fork
Camp at the creek

The notes abruptly terminate with a sharp scratch of the pen leading off-page. A soggy, three-toed footprint is stamped on the waterlogged edges of the page.]

Sorry to cause concern. I’m alive and well.

You have my dear friend and associate, Dr. Harlowe, to thank for this. I wasn’t going to share these, but she urged me to contribute to what little documentation exists on mile marker 923. I hope that my observations shed light on the true nature of this trailhead… Even if I don’t know what they mean.

Note: There are more than likely other reasons 923 has fallen into disuse. Bear activity, an underfunded Forest Service, inaccessibility, etc. I have no language to explain what happened to me, and I don’t think it would be right for me as a scientist to speculate. I leave the task of discerning the truth about 923 to you.

Something I really wanted to do while working on GR was make research / observation spreads for different ghosts in the story. Now that I’m off the shitts, I can do whatever I damn well please. So! I put together this spread for vlpn’s lovely Whisper, #923.

Mile marker 923 (linked in the blurb above) was the first piece I encountered in TWWM that depicted esk as weird, wonderful, and sometimes frightening ghosts in the land that exist outside of our understanding. It’s extremely my bullshit. I couldn’t think of a better character to yoink for this experiment.

I would like to do more, sometime. But for now, I’m just happy this is finished and was such a blast to make : -) ty to vlpn and snoodls for helping round out this spread and for making it such a fun little day-project.