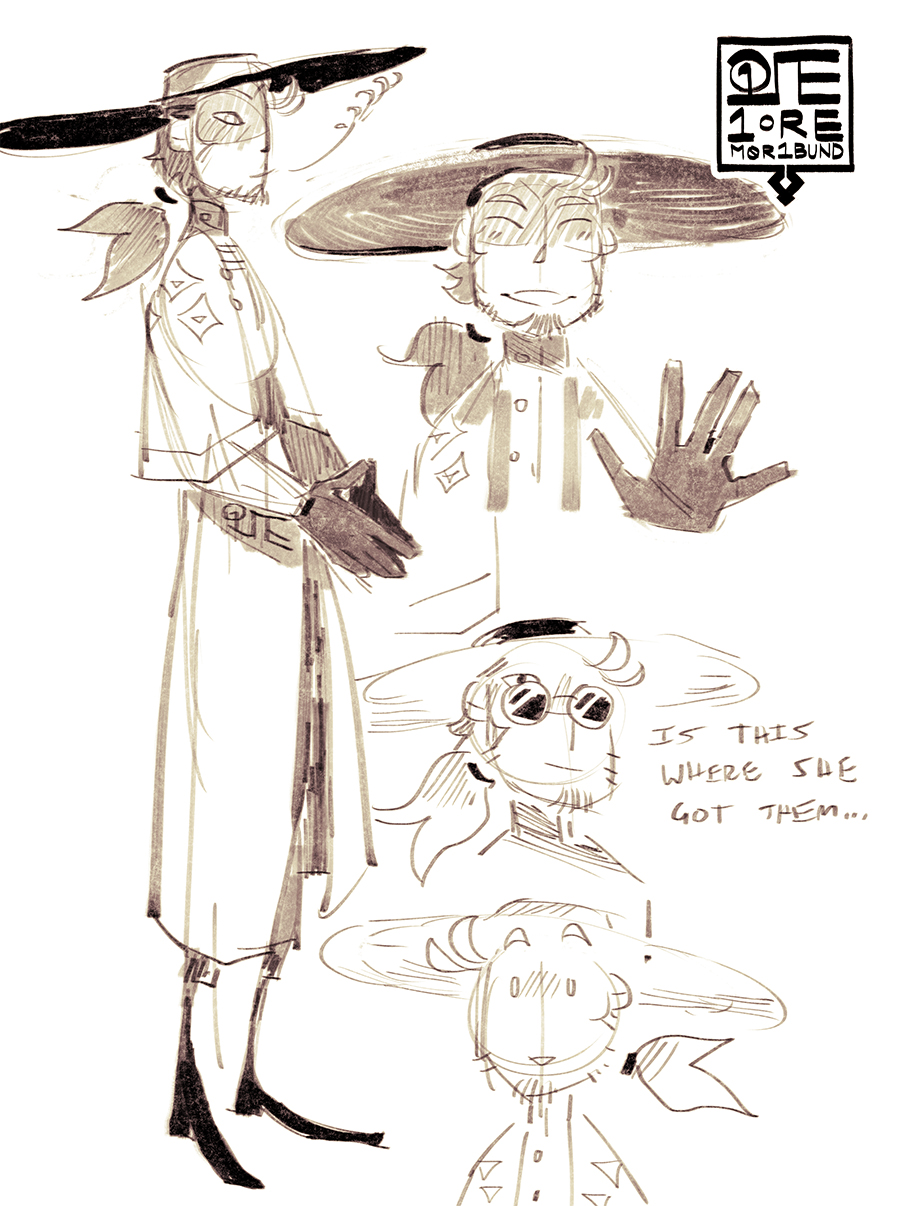 [Long description: A very familiar-looking Reverend. In a lot of ways he shares a shape with Jesse-- slight frame, moppy hair pulled back into a ponytail, tidy vestments, and huge galero-- but he lacks some critical details, too: no horns, no tail. And his eyes seem to have defined sclera, too. ]

Woof, it's been a while. Revisiting this is strange for me, because I'm writing these descriptions half a year after I first conceived them. But I'll do my best.

Anyway. An idea I had at the turn of the new year: Jesse didn't change shape or fabricate her body when she remade herself from Thaumat into Weird Little Reverend. Rather, she “found” it.

I have become quite attached to a vignette in which the Thaumat, devil-in-the-flesh, is hunted down by the Church and killed. Most beings of such gravity cannot be killed in Moribund, but most beings of such gravity have also never been shot with a gun. I think that the Thaumat realizes the age of gods and spirits is over, and shambles off into the woods, fully endeavoring to die.

(She is, of course, objectively wrong in her epiphany, but we'll get to that.)

In the woods, she meets a mortally wounded reverend who's also pissing away his final hours-- ironically one who was involved in the Church's wild hunt, or perhaps is responsible for the Thaumat's injury himself. They form a rapport as two things of the past, and the Thaumat takes pity on the Reverend, offering him a second chance.

She'll die and leave this world alone, of this there is no question. He will, too. But if he cuts her belly open, digs out the bullet, and crawls inside-- well--- maybe something better will crop up in their corpse.

Pictured above is that Reverend, before his shape gets... err... repurposed.

As with all things in the Hell's Gate sketchbook, these are young and mutable ideas. I am admittedly attached to Reverend Jesse “I Woke Up Like This” Cauldwell... I like not explaining away the enigma of her being. But I like this story a lot, too. We'll see what goes!