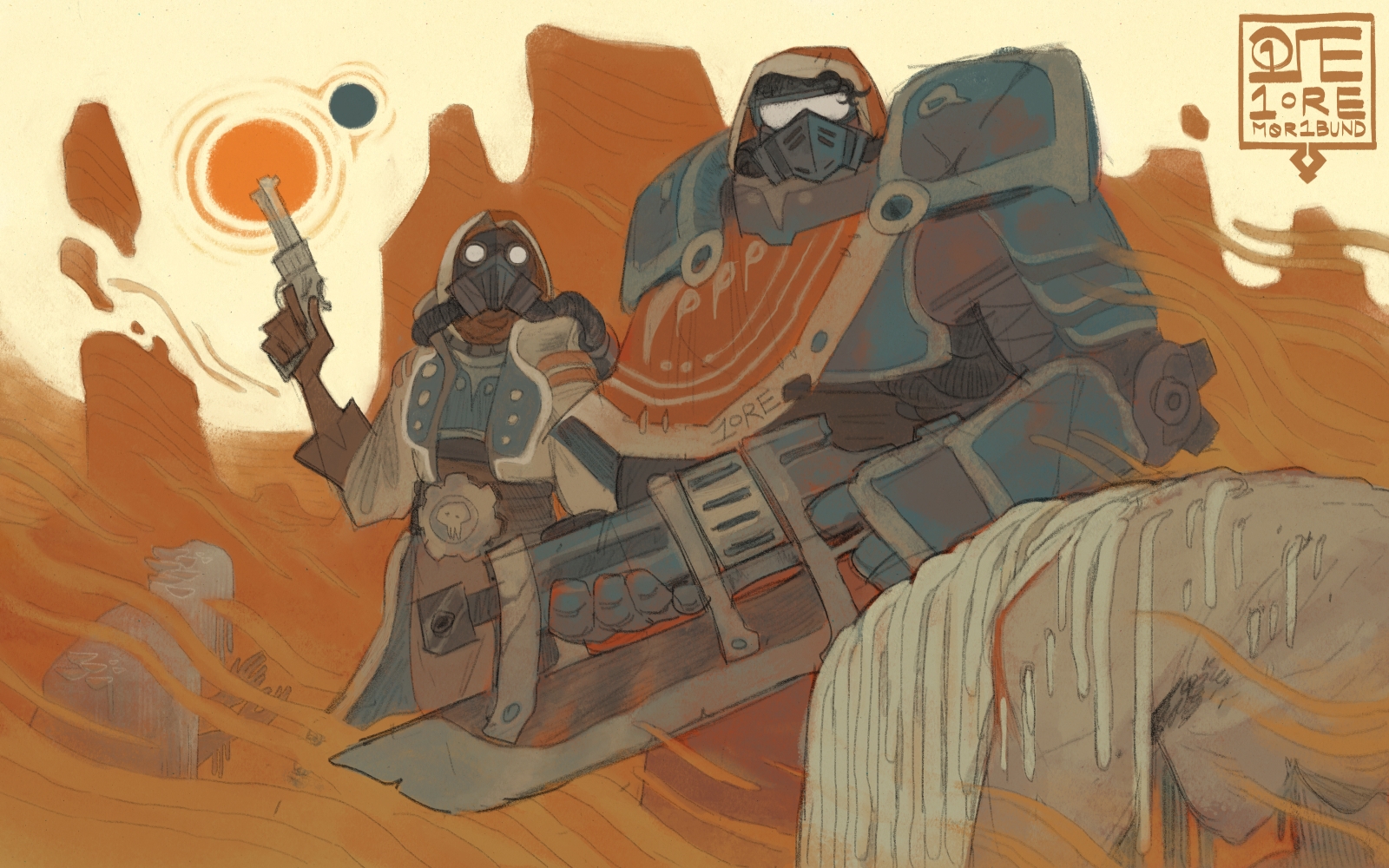 [Long description: A red canyon under a red sun. Dust blows from the hot earth, swirling around the feet of two figures; one is a formidable wall of a woman, outfitted in power armor and toting a huge pistol with a blade bolted to it like a bayonet. The other is slighter, dressed in a military coat and brandishing a scrappy little revolver. Both wear full-face respirators. They cautiously regard the two other strangers shambling around them—human figures with long strands of tissue growing from their skin, like some sort of fungus.]

(fart noises) more of this.

The R.A.’s homeworld is marked by hot and cold aridlands near what would be considered the poles and temperate zones here on Earth, separated by a chemically devastated and irradiated tropics. Many many years ago it was the site of a “minor” Imperial conflict, which changed the face of the planet forever, but kinda just… never made it into the records back home.

The loss of all land considered commercially arable by the Empire resulted in the planet’s abandonment. This necessitated a transition to nomadism and smallscale horticulture, for those who were left behind. Though the means to do conventional “industry” are no longer there (and maybe never were), there’s a great deal of debris and wrecked war machines to salvage and repurpose for homesteads, tools, personal vehicles, etc. Most communities don’t have access to a truly spaceworthy vessel, but off-world interaction + trade still occurs with those of spacefaring communities who stop by and visit. Probably where the R.A. picked up her familiarity with Imperial tech from across the ages.

Travel between the poles is an ordeal. The further you go into the irradiated hellscape, the weirder things get. Previously, the only way to travel to the opposite pole was on foot, a journey that was made by a few brave specialists maybe once every couple of years. In modern times, the journey is made much safer by partnering with offworlders, and making the jump using their vessels. There is still a certain appeal to traveling into the rift, though, since you can find all kinds of neat stuff in there... Provided the contamination, environmental hazards, or novel disease as-of-yet undescribed by science doesn’t get to you first.

It’s hard to say where that funky contagion came from, but whatever it is, it’s here to stay. It’s kind of like a funny slime mold that appropriates the genetic material of a host organism to give itself shape, or to patch up holes in a host… So you have these mimics or partial mimics of the native flora and fauna that are reconstructed using a chimeric mesh of familiar and foreign tissues. For years, encounters with these beings have been a mixed bag, all the way from “completely benign” to “AHHHHHHHHH”, but they have always been restricted to areas inhospitable to most forms of life. Recently, though, the disease has made the jump from the rift and into other environments-- probably even off-world-- which is a matter of grave concern for the Empire.

And so here we are. Chief and the R.A. doing some recon in the wasteland, with some lion’s mane mushroom lookin’ guys.