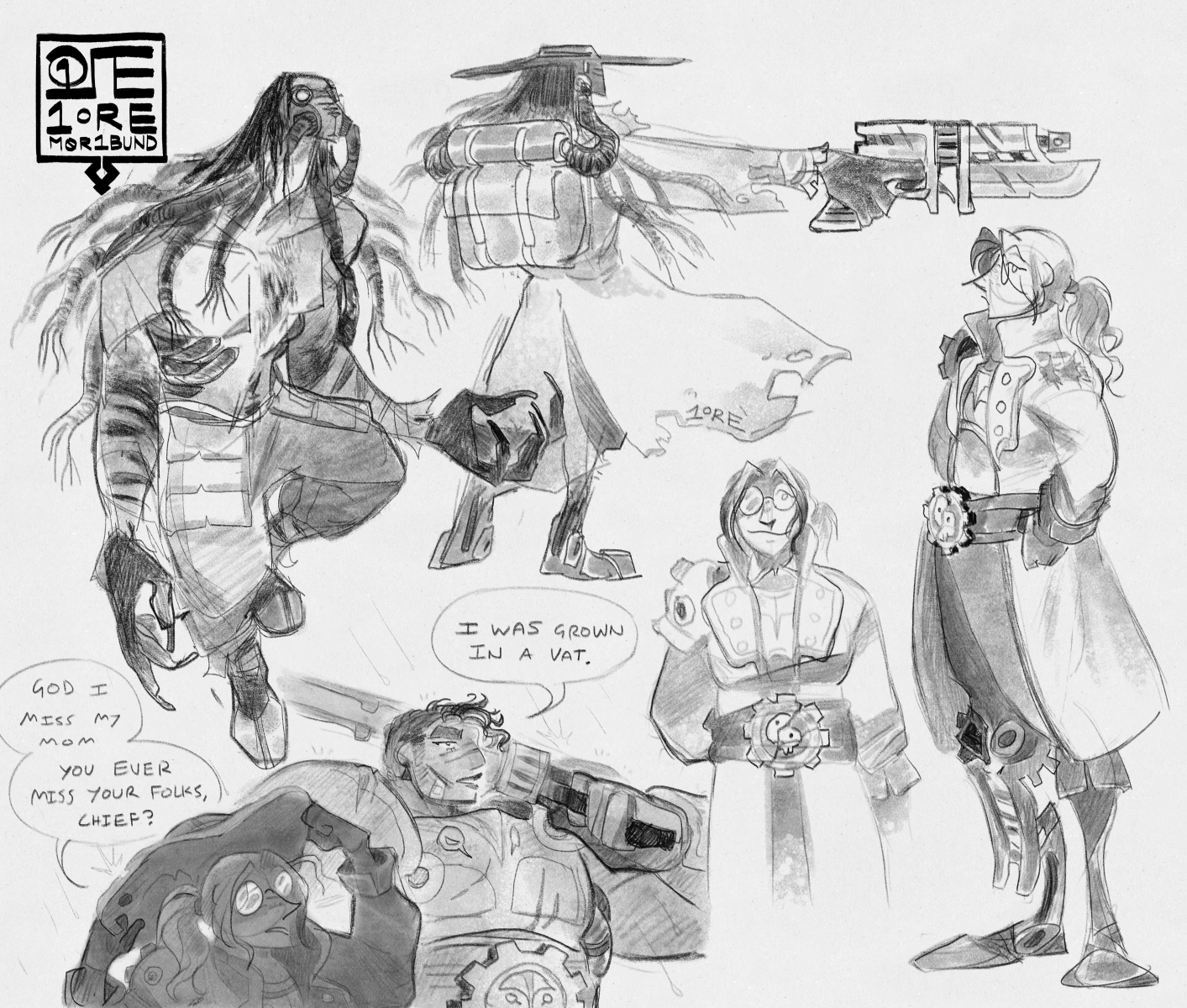 [Long description: A sketch page of some sort of space marine lookin’ gal gone monster. She’s top-heavy with big ‘ol claws, like a werewolf, but if a werewolf had her face fused with a gas mask and a bunch of cybernetics. frayed wires and tubes dangle from her head, neck, spine, and ribs, forming a motile mane. In one drawing she wears a duster full of bulletholes that’s a few sizes too short for her, brandishing an oversized pistol with a blade attached to it.

Accompanying her is a research assistant who looks friendly enough, if a bit in over her head. She’s tall, lightly armored, and wears her hair up in a wavy ponytail. She seems to be much more ‘analog’ than her cohort, wearing glasses and a relatively simple prosthetic leg.

In another drawing, the R.A. holds her hat over her head, shielding herself from the rain. She shares a moment with the soldier, apparently before her transformation;

R.A.: God I miss my mom. You ever miss your folks, chief?

Chief and the R.A.

*plastering my deranged little drawings on the wall* I Can Explain.

So a ~week ago, I had a dream about this Warhammer 40k-ass space marine who saves the life of a scrawny little research assistant, but pays the ultimate price and gets infected with the Diseases and the Sicknesses, which turn her into a shambling biomechanical monster. But the two of them are in love! And they are saved through the power of love, and also the power of dodging the draft.

Somehow, this activated the part of my brain that has lain dormant since I was like 9 years old, when I’d use my brother’s copy of WH40k: Dawn of War to act out trilogy-length adventure stories. I’ve been thinking a Normal Amount about these two women and drawing shitty little comics ever since.

I guess since this is the first doodle in the batch it would be good to introduce these two.

The Chief is like… She’s exactly what you’d expect from someone who has been groomed from birth to be a living weapon for an imperial regime. She has a lot of deprogramming to do. But she’s remarkably agreeable and even pretty well-intentioned, if you can get past the gruff exterior and the bonkers yonkers internal moral code that was drilled into her. Really, you get the sense that something in her is pushing back against all this, despite every effort to wire her otherwise…

The R.A. comes from a podunk little desert planet. Its people are so “backwards” and “uncivilized,” the land so “hostile,” that the extent of their relationship with the Empire is a yearly tithe that they forget to collect most years. This is, of course, code for “people who live in a desert in a non-sessile way that doesn’t align with settler expectations, and as fortune would have it, they’re spared the strife of ‘civilization’ in their invisibility and the perceived uselessness of their lands.”

The rest of the deployment considers her a luddite from a backwater shithole. She’s fine with this. In reality, she’s a polymath at heart, and is a talented mechanic, engineer, and general techie. She just happens to know enough about the Empire that she does Not want their technology anywhere near her body, thank you! Sometimes she feels like the only one in the universe who has gone outside and touched grass, and it’s driving her banana sandwich. But she’s not about to tell the shambling instruments of war called her coworkers that there’s, like, actual plants and stuff back home. That would be bad.

Well, maybe she’d tell one person. But only if she asks really really nicely.