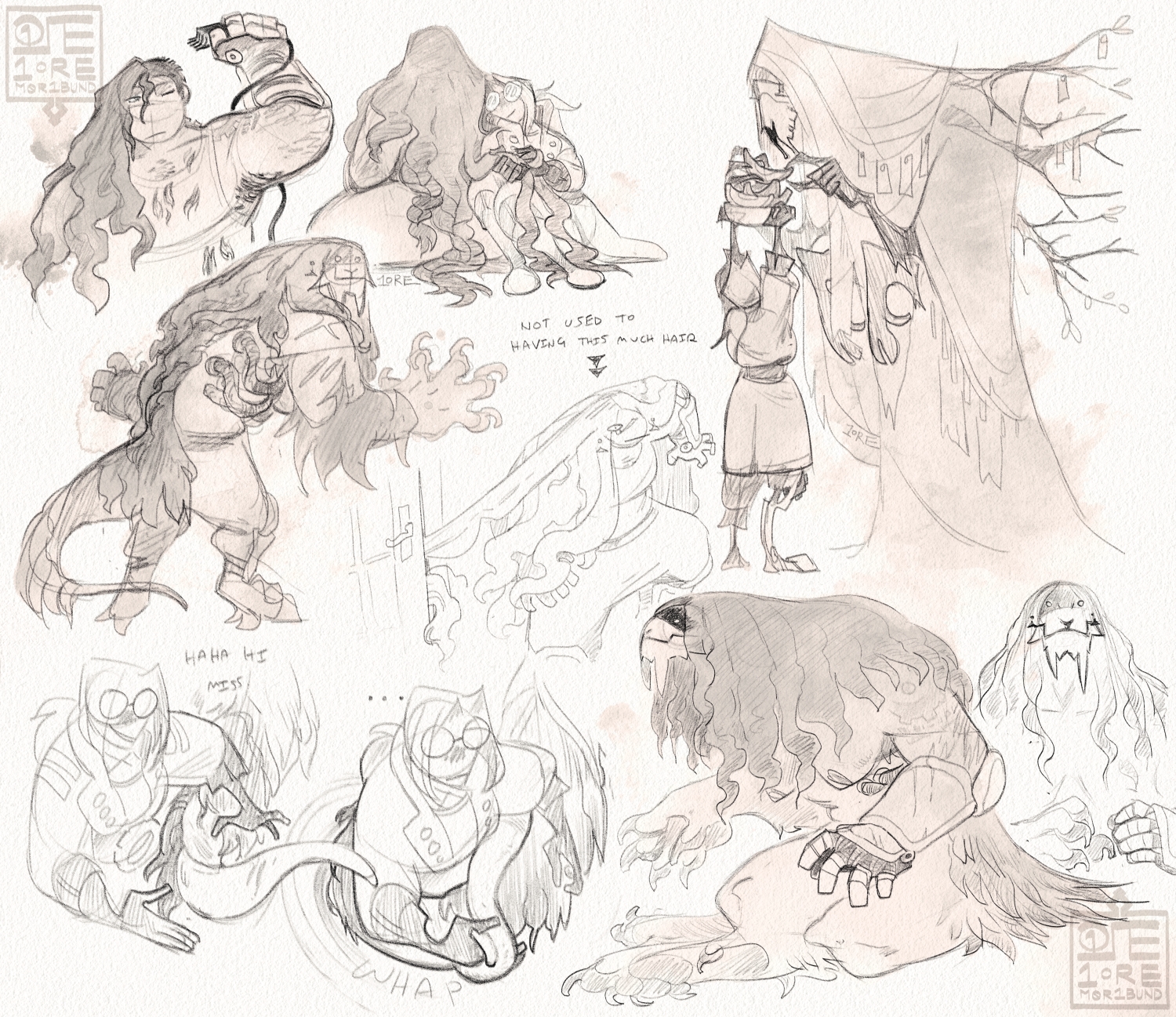 [Long description: A sketch page of mostly Chiefs with some R.A.s thrown in. The Chief is variously depicted in her monster form, which is kind of like an uncanny human-horse-gorgonopsid-werewolf. She also hangs out in her human form, but with unusually long, moppy hair. In one vignette she up and buzzes it all off, in another, she closes a door behind herself and gets her hair stuck in the doorframe, and in another still, the R.A. tries to get it all under control by braiding it.

Other parts of her anatomy take getting used to, as well. In another drawing, the R.A. bumps into the Chief’s huge, possum-like tail. She says “Haha, hi miss,” and holds her hand out politely like she’s going to shake it. Instead, the tail wraps around her whole waist, with some left to spare for her hand. The R.A. thinks twice about shaking it.

The deer-woman-monster makes a guest appearance, as well. The R.A. holds up a bowl of conciliatory melon slices for her to inspect, which she does with great interest.]

What else do I have… For the Chief, there’s some body dysphoria wrapped up in constantly growing out her hair whenever she changes. I don’t know whether she buzzes it for practical reasons or because of military mandate during her service to the Empire, but either way, she’s never had the… choice? freedom? to style it really. Now she’s forced to make the decision almost daily, because she’s either stuck shearing herself like a sheep every couple of days or coping with having hair of a silly length. The R.A. is convinced there’s a silver lining (new hairstyle on command!) but Chief historically is not the type of person to experiment with her personal appearance.

Anyway. There’s some throwaway line in the WH40k wiki about how space marines can consciously regulate almost every aspect of their metabolism and bodily function. Upsetting! I am mentally combining the lack of personal autonomy with absurd amounts of external control over the body itself to create the ultimate Imperial nightmare: woman with no autonomy suddenly has the keys.

And she’s using them to become a bigger, fuzzier woman, I guess.