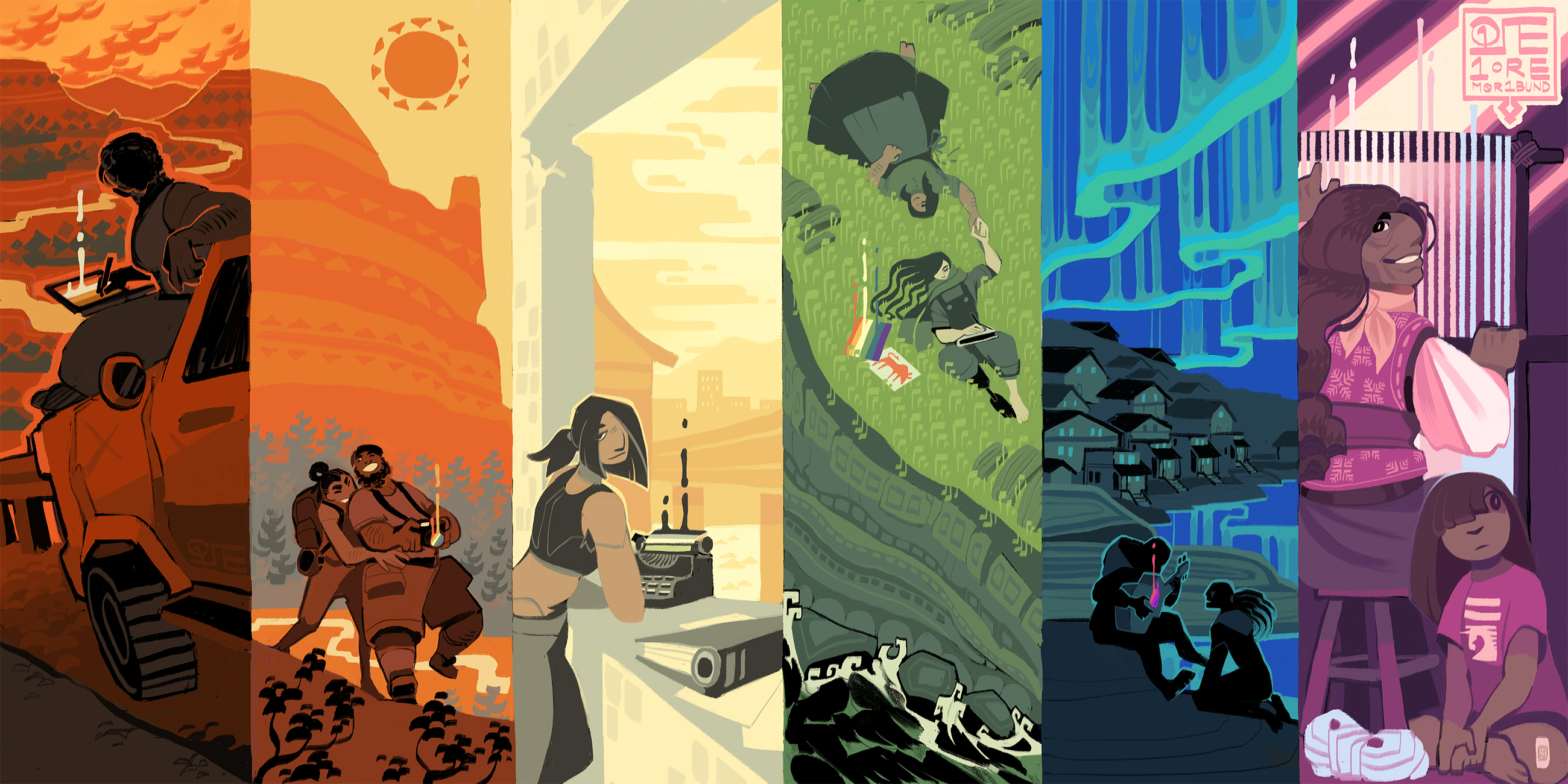 [Long description: A banner depicting 6 different vertical compositions, each modeled after a color in the rainbow pride flag. From left to right:

In red: A graphic designer at a highway margin, overlooking the Senqu (Orange) river near Quthing, Lesotho. In her laptop display is one of many butch pride flags.

In orange: A photographer and his husband hiking the Verde river in Sedona, Arizona, in the U.S.. Reflected in his shutter is the rainbow pride flag.

In yellow: A writer at Treasure Hill, on the Xindian river in Taipei, Taiwan. Depicted in their typewriter is the agender pride flag.

In green: A wildlife artist and her partner at the cliffs of Cruachán, Ireland. A selection from her sketchbook depicts the rainbow pride flag.

In blue: Two lovers singing and strumming under the aurora at Iqaluit, in Nunavut, Canada. Depicted in the interior of the guitarist's instrument is the bi pride flag.

In purple: A Chilean weaver at the loom, with her grandchild, somewhere in northern Chile. Half-woven is the trans pride flag. ]

I was approached back in May to do banner artwork for dA's pride event (you can check out the journal here.) This piece was a challenge for a lot of reasons, emotional and compositional, but I think I like what I arrived at. I wanted to try to capture the joy i've experienced in connecting with others in the LGBT+ community, worldwide. To that end, I tried to select places I had at least some, small connection to, by way of the folks I've met over the years.

I hope you find something that looks familiar in it! : -)

To close, some songs that helped rear this to completion, and which make my heart full:

A final acknowledgement that I want to make, in the spirit of transparency and out of respect for my own feelings about monetizing this part of my identity... I was paid 500$ for this piece, which I intend to put away so that I can hire a diversity editor for my webcomic, Ghost River. Barring disaster, any remaining amount will be donated to an indigenous sovereignty effort (in the spirit of GR) and a LGBT+ nonprofit-- I haven't decided which organizations, yet, but I'm eyeballing the Black Visions Collective. Suggestions always welcome : -)