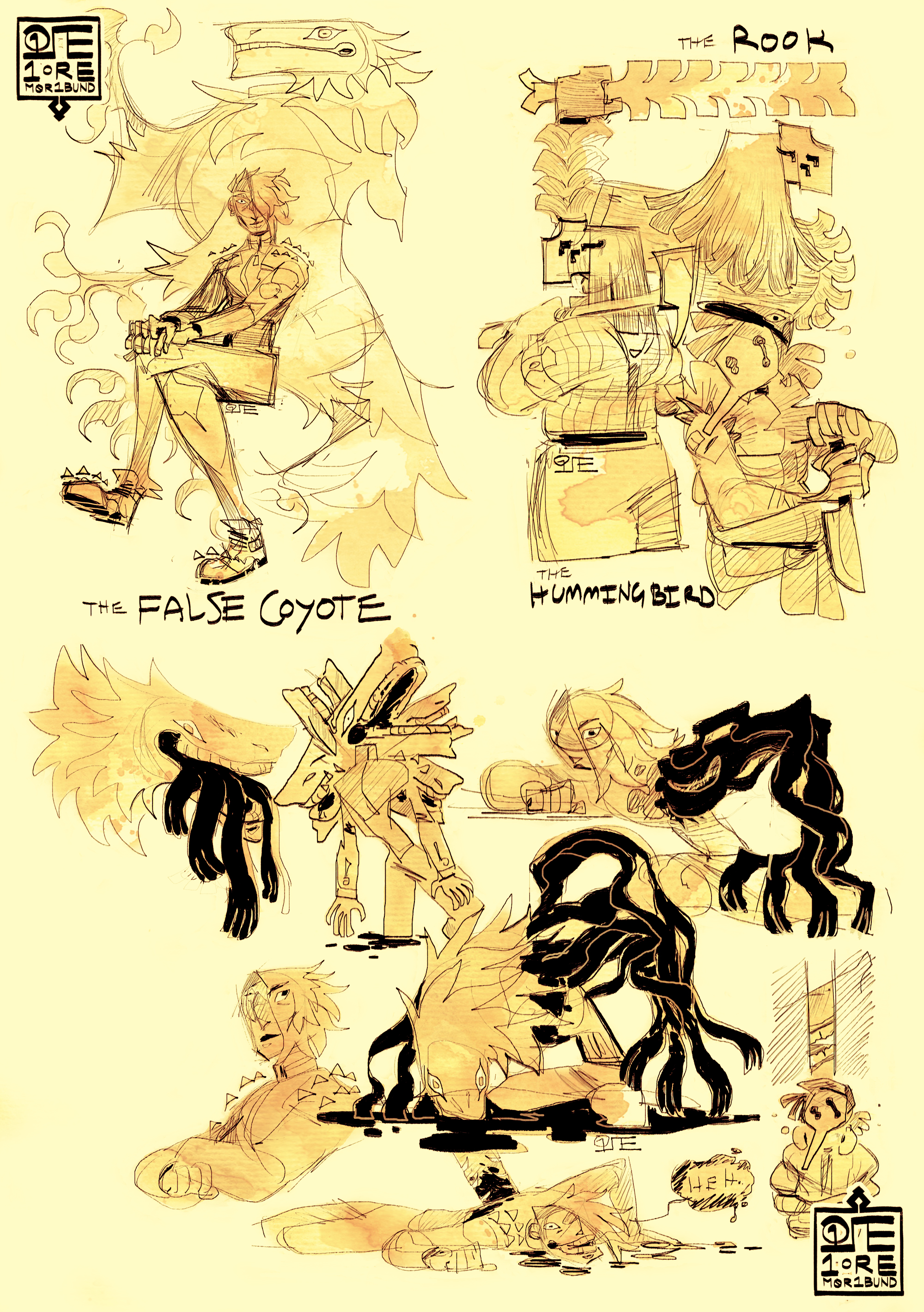 [Long description: Sketchpage drafts for the False Coyote, a charmingly eccentric older woman with something not quite right about her; the Rook, your roommate and childhood friend who is just trying to look out for you; and the Hummingbird, notable date-haver, ostensibly the protagonist.]

Sitting by the window as the world goes passing by
This is your return to a life you put aside
You had everything you wanted, you were young and so alive
It all becomes a lonely lullaby

Can it be you’re dreaming? You’re never leaving town.
Or maybe this is heaven? Or else you’re going down
There are faces in the shadows, there are echoes on the tile
It all becomes a lonely lullaby

yesterday morning I woke up from a dream where a lady invites an older woman back to her house after a date, but her roommate warns her that this strange woman is bad news…

Over the course of the day I tried to see how much I could do with them.

I only remember bits and pieces of the dream itself, more about the dynamics and emotions of the characters than their designs really. pal clysmo suggested masks as a way to address this and i fell in love with it.

The premise is that these characters are plunged into a sort of liminal fey realm by a curse lain on the False Coyote. During certain hours she is safe to be around, and actively helpful– even charming– but during others her shape becomes unstable and she is overtaken by a terrible monster.

So she says, anyway.

The Hummingbird is a regular ol’ human. She kind of turned into an everyman, but who errs on the side of empathetic and would certainly be the mercy to her roommate’s staunch sense of justice. not handy with a kitchen knife. lovelorn. just wanted to go on a date :^(

the Rook is your roommate and childhood friend who was masquerading as a people for a long time, before reality started peeling off the walls like cheap wallpaper. She starts out as kind of a Baron (The Cat Returns) figure to Hummingbird, and seems to want to protect humans from the False Coyote, but her cracks start to show in the form of a deadly obsession with hunting the monster.

the False Coyote is your date, and she’s really very sorry about the mess she made in the kitchen.

I like to think both the False Coyote and Rook have routes like in a dating game, but the good end is getting everyone out alive And Also They Kiss. Some other ends might include:

That’s about all I got… This might be the origin story for a character that shows up in Jesse Cauldwell’s story, so consider this contiguous with that little side-project. Thanks for reading!