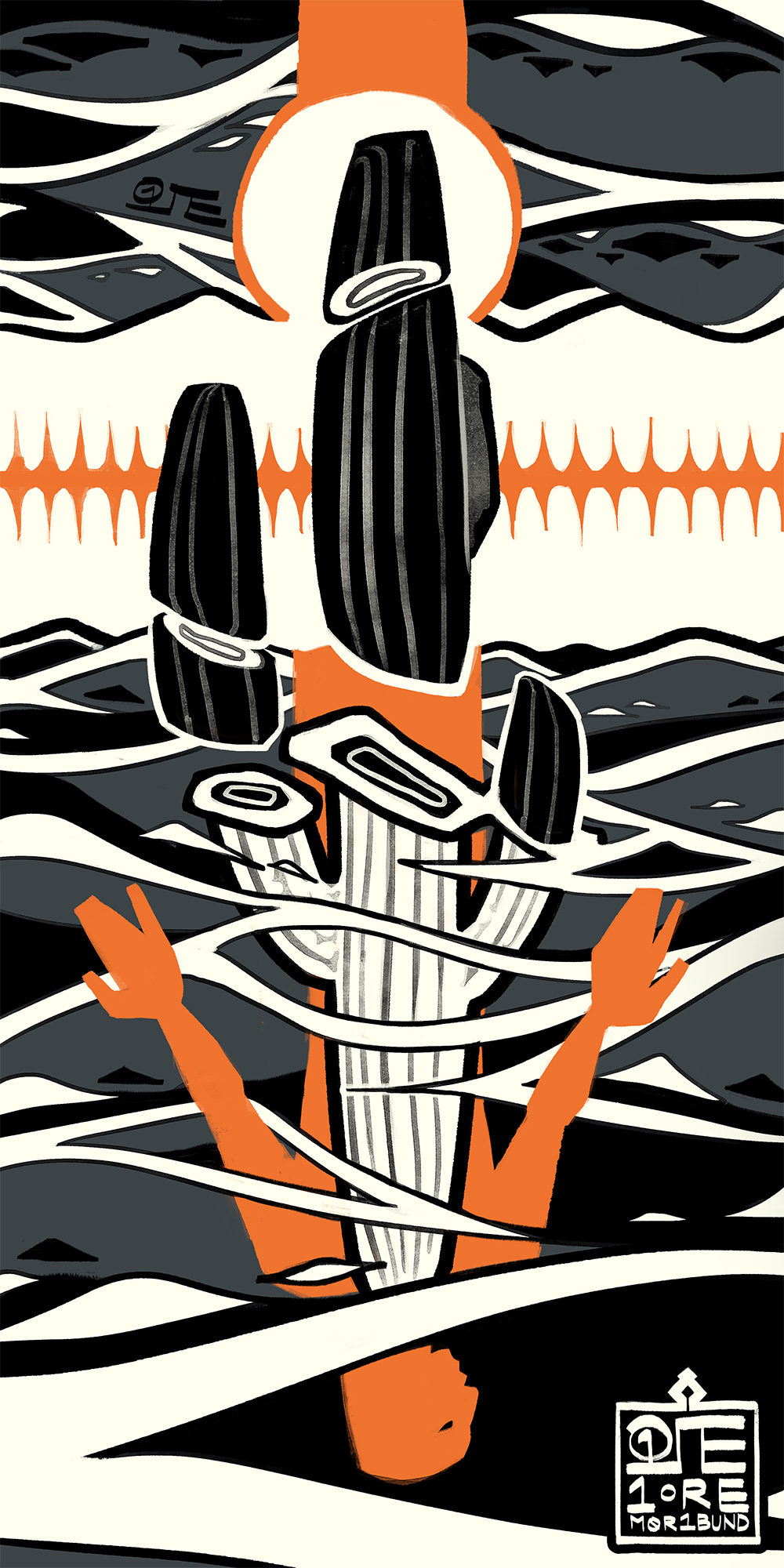 [Long description: A saguaro, straddling somewhere between sea and sky. Half of it is submerged underwater, where its exposed ribs are bleached white; The half above the waterline still has flesh on it, but it's cross-cut by clean lacerations. Shadowed by the giant is the silhouette of a person, hanging in reverse, while the distant line of the horizon is barred like a gate.]

This was going to be more explicitly protest art, but, I hope it still has that vibe to it. I wanted to make something before Earth Day was done. A while back I saw a video of felled saguaros lying in pieces on either side of the newly constructed border wall, and the image has never quite left me (this article outlines some of what's happening there, if you'd like to read more.) Around the same time, I stumbled across this 1993 article about saguaros on Lake Pleasant that failed to be relocated when the waterline rose in the reservoir. The images have blended together in my mind.

Saguaros are not the oldest-lived individuals here, but they hold an eerie mirror to the human timescale. They spend their early years a mere inch tall, and it can take anywhere from 50 to 100 years for individuals to sprout the first of their iconic “arms.” You can look at a forest of saguaros and know they were here in the time of your mother, your grandmother, and your great-grandmother. To put it another way: many individuals predate federal efforts to dam the southwest at the turn of the 20th century, and long predate the sprawling communities that have sprung up around them. It's hard to capture the grief of seeing one brought to its knees, letalone many.

The Center for Biological Diversity, No Mas Muertes, Borderlands Restoration, and the O'odham Solidarity Project are a handful of organizations tackling the enormity of what's happening at the border from a variety of angles. Check them out, if you're feeling charitable with your time, money, or social media.

It's easy to feel defeated during these times, so it would be irresponsible of me to leave this on a depressing note. I want to also share some articles that made my heart grow three sizes: ( ‘Tremendous Victory’ For Wildlife: Federal Judge Invalidates Keystone XL Pipeline Permit ) ( Victory: evangelical missionaries barred from uncontacted tribes’ land )

Resistance is exhausting work. But sometimes it's just loving on a desert, vocally and without fear. I hope you've had a little bit of that for wherever you've put down roots today.