~Plant and fungal growth on a human body. 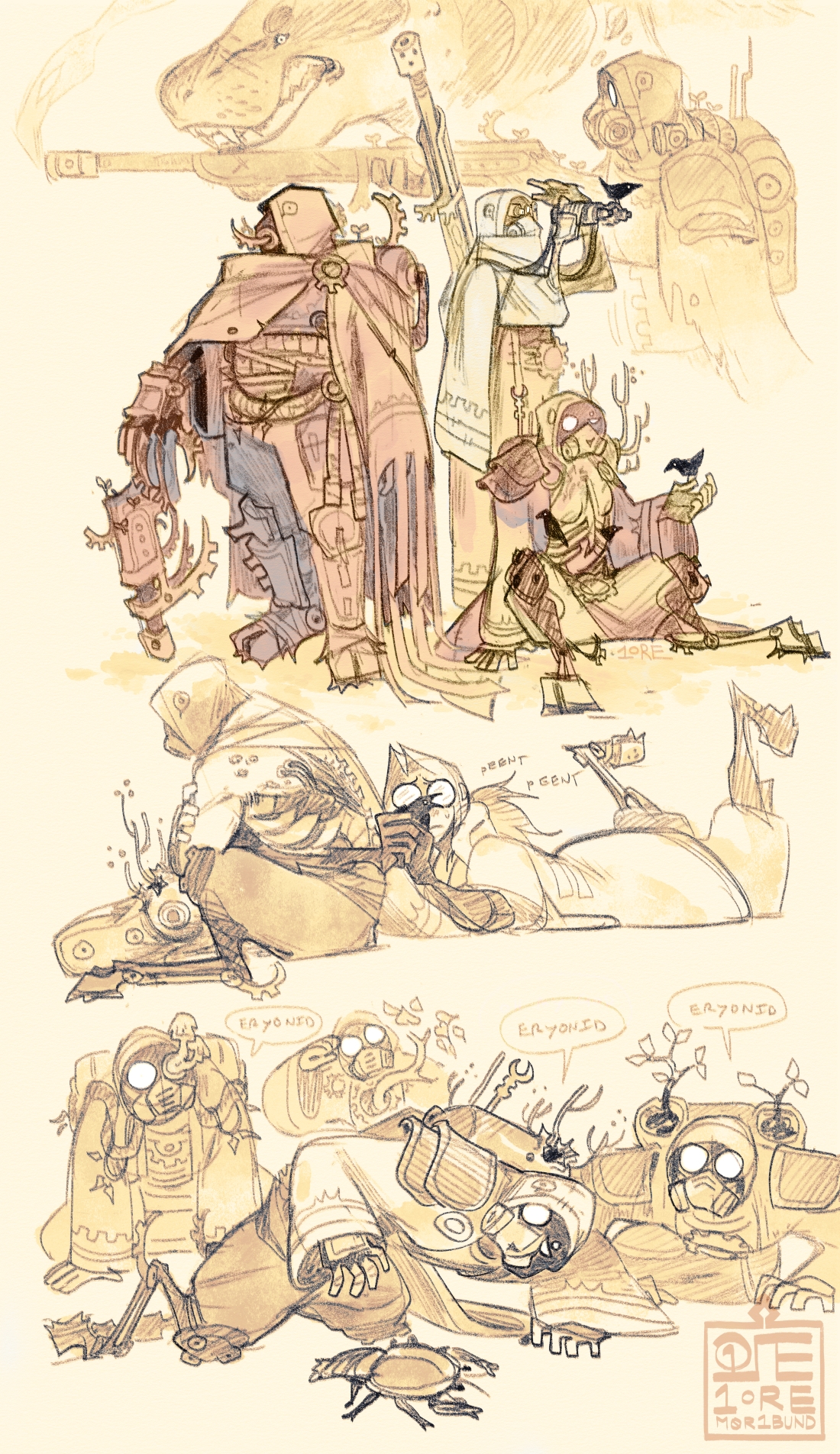 [Long description: A sketch page of some funny-looking cyborgs. They’re dressed in old, hooded robes, empty-eyed goggles, and armor with cog-like embellishments. Most are armed with beat-up rifles, and the fellows themselves are kind of scrappy to match. Many of them have tiny sprouts growing from the wooden stocks of their guns, as well as their own bodies. There’s ephedra, manzanita, cottonwood, milkweed, and some desert shaggy mane in the mix. One is even accompanied by a formidable cynodont-looking critter.

MarkOS is here, too. He’s the short one with digitigrade legs, asymmetric eyes, and not much left to him but his head, shoulders, and ribcage. Some starlings seem to have taken an interest in building a nest in his ribs. Research assistant Reyes tries to convince them otherwise, but MarkOS looks ambivalent at worst about his new neighbors.

Another spread shows MarkOS and some other surveillance units watching an eryonid amble its way to the sea. It looks like a lobster crossed with a horseshoe crab, and the group watches it with such fascination that they can only chirp “eryonid” at one another, like a couple of birds making contact calls.]

[…] The “Endling Cult” first came to the attention of the Imperial Archive during the ██████ ██████, █ Archival years ago. Due to the remote location of the ███ system and ████████, the cult remains poorly studied. To date, this record is the only document of its kind that the Archive is aware of […]

[…] The cult consists almost exclusively of rogue vassals and ex-secutors of the Empire. A few, founding units achieved autonomy through unknown means during the ██████. The mechanism by which this was accomplished is not known, and is regarded as a closely guarded secret by the cult. What is known is that the cult is capable of passing on this autonomy by deprogramming other units—an act that they consider to be a moral compulsion.

The cult’s beliefs are primitive in nature, and centered on the existence of animistic spirits that they believe inhabit all things, animate and inanimate. Though they observe a variety of superstitious rites that involve people, plants, animals, and landforms, they are chiefly concerned with the ensoulment of tools and machines, which they consider to be fully autonomous beings. Because of this, their doctrine calls for the immediate liberation of secutors and other vassals of the Empire, wherever they can be found.

It is not known where the cult’s dogma originated, though it probably arose in the ███ system. Forms of animism are still observed among the system’s feral populations, which only nominally converted under Imperial occupation. No doubt this ideology would have appealed to the newly-autonomous units. Heretical delusions of self-sovereignty are common among defective units, even those that are unaware of the cult.

Another intriguing possibility is that the cult’s autonomy may be a consequence of the endeme, a morphogenetic disease endemic to the ███ system. The disease’s curious ability to manipulate both living and nonliving matter may have fostered consciousness in the cult’s first ex-secutors. This theory is further supported by the cult’s close relationship with the endeme, which they appear to hold sacred.

One challenge of this theory is that the endeme does not typically manifest in secutors the way it would in the human body—that is to say by manipulating the host’s morphology. This is because little of the secutor’s original body is left after biomechanical augmentation. What flesh remains seems to confound the disease, particularly when the secutor has undergone extensive modification, and is missing most of its vital organs. It’s worth noting that secutors are not immune to the endeme; the disease simply manifests in a more commensal form. How the disease survives in a body as artificial and chemically contaminated as a secutor’s remains a mystery, but the Archive speculates that it may metabolize waste material and other toxins that are commonly found in cheap, expendable field units. If this is true, the secutor may serve as a conventional food source rather than a host organism.

Regardless, their bodies are an ideal growth medium for these commensal endemes. Many of the host ex-secutors are not only tolerant of the disease’s presence, but welcoming. Indeed, they take an active interest in cultivating it in themselves and others. Care for the germ is fastidious to the point of obsessive, and appears to serve an in-group bonding role, as well—pruning one another’s endeme is an intimate and ritualistic act […]

[…] Though the cult is currently restricted to the ███ system, it is highly unlikely that this will remain true without Imperial intervention. Ex-secutors of the great wastes are alarmingly well-organized. They travel vast distances to gather together, trading seeds and gossip. These meetings allow them to maintain cult bonds with members of the out-group, and indoctrinate neophyte exiles into their ranks. Further, the cult’s doctrine calls for heretical disinformation campaigns and acts of sabotage targeting the Empire itself. Their zeal, cunning, and resourcefulness cannot be overstated; no Imperial surveillance unit has thus far succeeded in infiltrating their ranks. Should their obsession with secutor liberation spark the interests of the common man—or, more worryingly, the secutors themselves—then the very engines of Imperial industry could collapse overnight.

“moral compulsion” “primitive in nature” “delusions of self-sovereignty” what did you tell them R??? @_@ this is like a bad joke

Hee heem… Playing a game of telephone with the cult mechanicus over here. Trying not to be embarrassed about this being my life right now but whatever /_\ I’m having a great time.

I am very interested in how animism and the language of animacy reveal who we have ethical consideration for and who we don’t. Robin Wall Kimmerer writes a lot on this subject and it is very cool. Anyway, really saw “animist machine religion” and my brain went haywire. something something when the Empire treats you no better than the dirt on their heel, find solidarity with the dirt??

I enjoy writing documents with all the biases, partial truths, and mistruths of the in-world, but there’s one or two things that the Empire doesn’t know that I think are cool. A.) the disease didn’t do that to the endlings and neither did any other third party, they really just Did that, and b.) empire can’t sneak in past security because they keep indoctrinating their agents with things like food plants and ornithology.

In other news, it’s been fun to represent the frankensteined organisms created by the disease as extinct Earth fauna. I wrote a whole essay about it, but the long and short of it is that the endeme is more like a funky moss that lives in the interstices, rather than some kind of superdisease. The only reason it’s acting Like This is because there’s no other organism hardy enough to fill the gap. So, I think it’s fun to create these chimeric assemblies of modified organisms that are not only tossed together across space (as in exotic, naturalized, and invasive organisms) but also time (as in extinct organisms).

As you move towards a more stable ecosystem you inevitably lose some community members, and gain others. I think being in these chaotic early stages of succession is significant to the ex-secutors. They don’t want anyone else to experience what they went through, but by necessity that means that they will have to be the last of their kind. It’s a mad scramble to put those old surveillance doohickeys to work, and document everything they can before their time is up.