Fictional -isms, typical Empire behavior, abuses of power in the context of medicine and healthcare 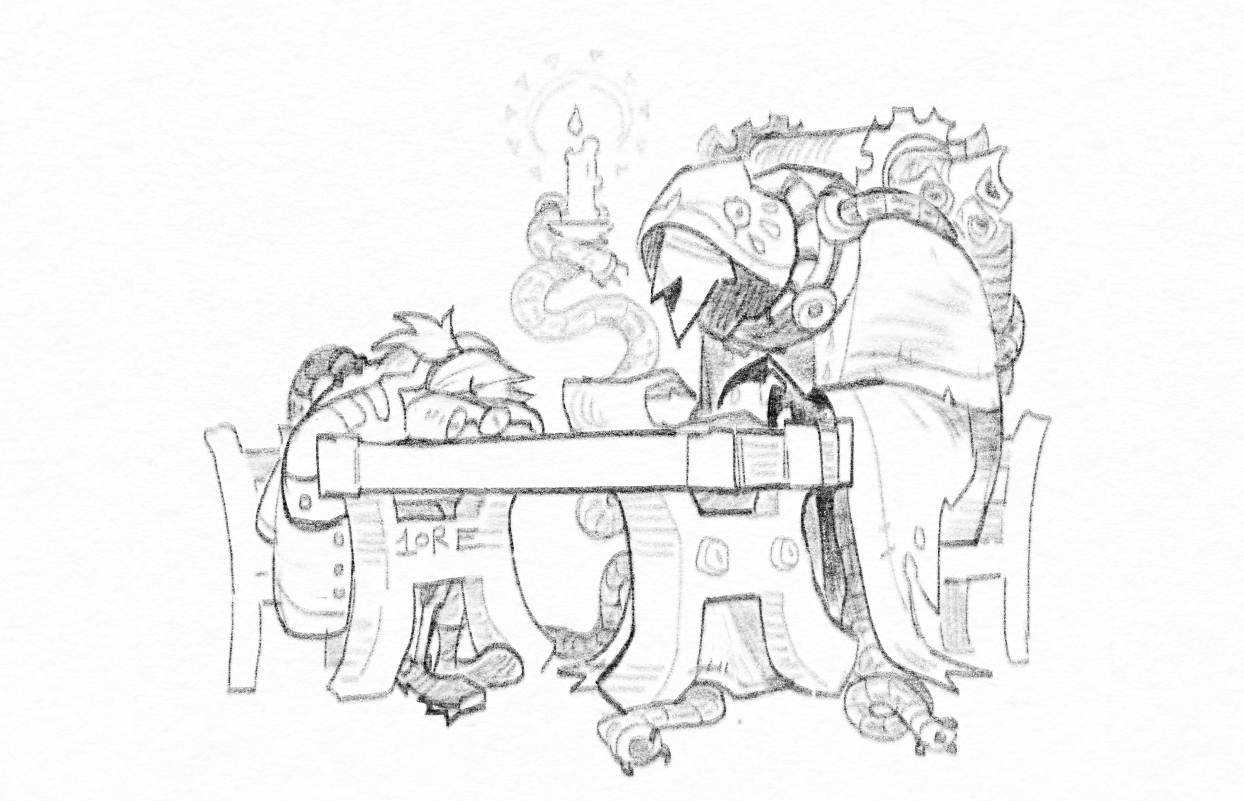 [Long description: The Doc passes a late night by candlelight, writing analogue—that is, writing pen-and-paper (or talon-and-paper, in her case.) Reyes is passed out on the table next to her, with her military coat draped over her shoulders like a blanket.]

Regarding the Arts, Mortal Injury, and the Endling Cult

They call themselves a cult, but what deference to clerical authority they demand, if any, is unclear to me. Observation tells me that their doctrine has as much in common with the Imperial Code as a child’s drawing of a tree. Ah—but at least the drawing is chronicled in indelible ink. In their secrecy, the Cult leaves no records that I am aware of.

I am convinced this is part of the joke. There is, of course, safety in secrecy. I do not deny that more sophisticated codices could exist, unbeknownst to outsiders; It is only wise to conduct their business viva voce and in code, when the Archive twists any word it can understand. But there is also no consensus among them except, perhaps, the implicit consensus of associating with one another. My former subordinate once asked when in the year they gather to perform maintenance on themselves—an innocent question which, in her mind and mine, was a given. Not so. The question was first met with silence, and then the raucous sound of many voxes talking over one another. No consensus was reached, that day. They all scattered like splinters from the first tree.

It was only later that we learned the indiscretion was ours. A mutual friend informed us that the very act of seeking repair is not practiced by all members of the Cult. This is due in part to the rarity of specialists who are willing to work with ex-secutors. Bioengineers alone possess the depth and breadth of knowledge needed to maintain a secutor. To the average ex-secutor, seeking repair means seeking out the very ones who made them the way they are today.

The risk that this poses to the Cult is self-evident to them as it is to I, though few outsiders are aware of it. Still, it does not surprise me to hear that I and my ilk are considered too dangerous to negotiate with. Most secutors have traumatic memories attached to Bioengineers, to speak nothing of the great physiological and psychological transfiguration they experienced in our facilities. Even if a Bioengineer harbored sympathy for an Endling, we would sooner decommission them than risk incurring the Inquisition’s wrath. I am sure at least one desperate secutor has made the gamble to go under the enemy’s knife, and lost. There may be other defectors who have managed to escape the hounds of the Empire, but few will risk coming out of hiding to aid insurrectionists.

There is the matter, too, of our own culpability. The Archive entrusts us with the art of iron and blood, which we gladly use to shape its puppets. Therein lies the irony: We are uniquely qualified to minister them, and uniquely fatal in their hour of need.

There is another matter that complicates this, as well—one which I was ignorant to as an outsider. Seeking repair is not merely a question of risk management. It is also an epistemological paradox.

The Endling Cult is called to dismantle the very machine that created it. In other words, the Cult imagines a future in which it does not exist. This poses certain ethical dillemmas to the Endlings, should they seek to extend a life lived on ‘borrowed time.’ Some consider it selfish and short-sighted to solicit an Imperial Shaper for repair, even indirectly. No good can come from the hand that made the wound—even if that means the ex-secutor will break down and functionally die. This is a luxury they were not afforded in their previous life, and to rebuke death is to rebuke transformation, decay, and the right to life of what comes next.

Others hold a more utilitarian view. There is no reason to believe that efforts to maintain their bodies are anything but an expression of the natural will to live. Someday, every part of them will die and rot and be made new. The hole left behind in the original organism will be filled by a patchwork of borrowed matter. As experience has taught the elder secutors, no self lasts forever. This cycle of incremental death and becoming is less like the manufactured immortality of a machine, and more like the succession of a forest.

Controversy notwithstanding, the Cult’s heathen sentiments have at least some founding in reality. The Endeme intervenes when old machinery fails, particularly where there are fragments of organic matter to build upon. This form of self-maintenance is both permitted and encouraged, and it is common to inoculate wounds with Endeme-contaminated plasm. Still, this leaves the matter of artificial prosthetics and other apparati unresolved. If the disease manages to take hold in these components at all—an unlikely prospect—it usually results in bizarre transformations. Such growths make my work more difficult when the situation inevitably becomes too desperate to manage alone.

This is not a judgement of the Cult. I am happy to do my work. It is only a symptom of the same problem: I know that I can be trusted. They do not. There is no way to know that the cutting will stop when I say it will stop. The Endeme, at least, demonstrates a common interest in their survival, where the Archive has shown them only contempt and apathy.

One cannot begrudge the Endlings a desire to live, when their time draws short, and there is still so much work to be done.

More in-world documents puttering around in my brain. The Doc is a good excuse to lean into my brainstrange and go full roundabout sentences and pretentious lingo. She's also got her tongue-in-cheek doublespeak and genuine layers of indoctrination that bleed into each other in a way that I think is both interesting and uncomfortable in a constructive way.

With much gratitude to Kitty Giraudel for the accessible footnotes.