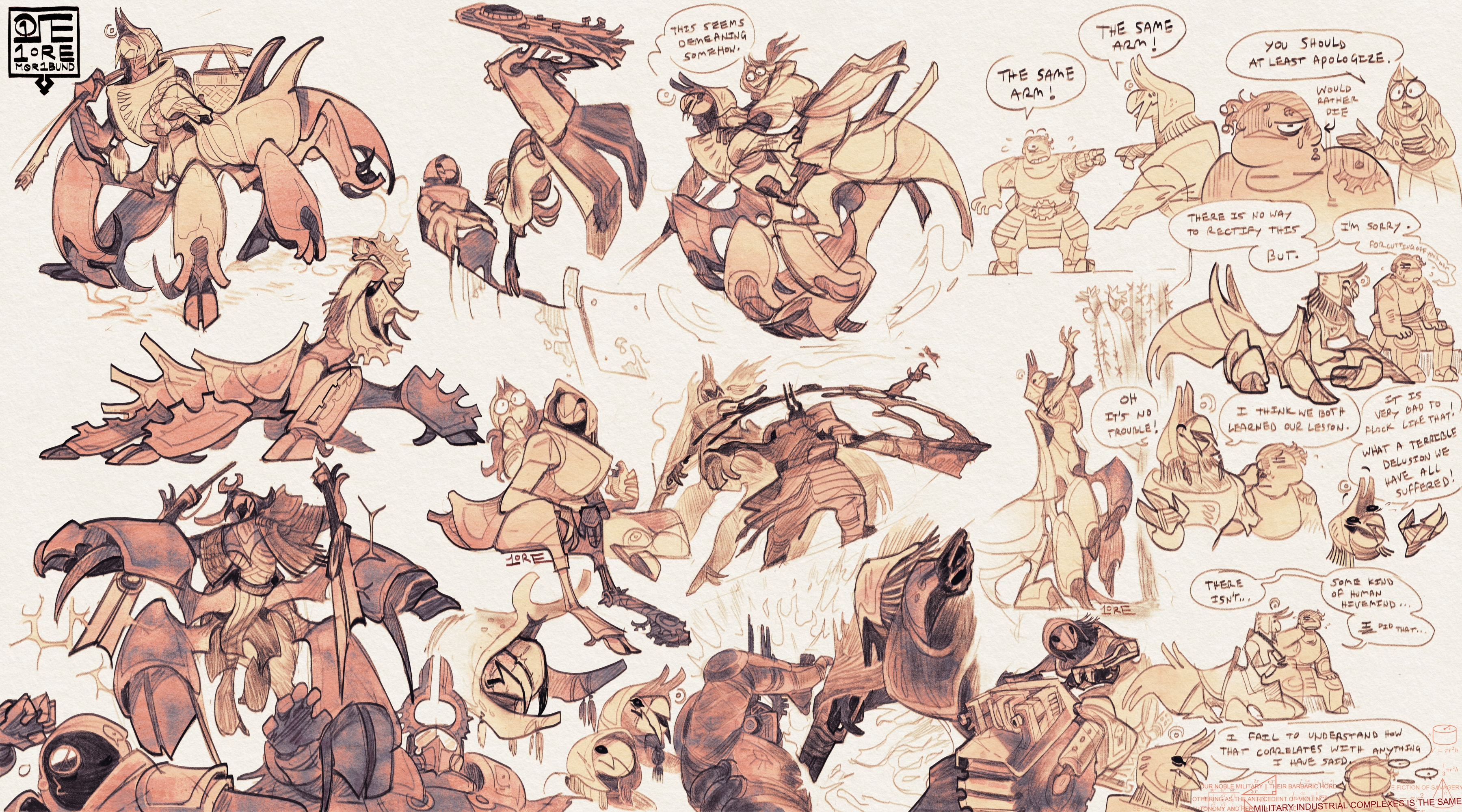 [Long description: A big ‘ol sketchpage of funny little centaur-spider-beetle guys. From the waist down, they are mostly hexapedal, with thick carapaces and stocky limbs that are equal parts ungulate- and insect-like. Their upper bodies are more humanoid, with two arms and an upright posture. Their chests and shoulders are enclosed in large, collar-like shells, and their heads are covered by a carapace forming a hood. They have a vaguely avian profile, with large, blunted beaks and oversized mandibles inset into their jaws.

One of them, Rho, hangs out with area human and research assistant Reyes. Rho is bipedal instead of hexapedal, with segmented satyr-like legs and a short, stubby carapace ‘tail.’ Her left arm and leg are mechanical prosthetics, as well. She watches Reyes shred on a makeshift hoverboard that they probably ripped off of a hunk of Imperial junk. In another doodle, Rho rides an old Imperial motorbike through the wastes.

Her cohort Oeste is a battle-scarred old woman with kind of a puckish, sanguine energy. He is missing his left arm. He’s variously drawn hoisting a basket of fish over his shoulder and getting up on his back legs to reach some fruit at the top of a saguaro arm. One drawing shows him carrying a scrongled-looking Reyes on his back, while he comments ‘This seems demeaning, somehow.’

There are some drawings from his not-so-distant past, too. He is shown contending with a space marine-lookin’ soldier on the fields of war. One drawing depicts the fateful loss of his left arm to a brutal cleave of the soldier’s longsword. In another drawing, he returns the favor by firing a mortar point blank at the soldier’s shoulder.

Only later does he learn the soldier’s identity. The Chief immediately identifies Oeste by his arm, and vice versa. It plays out like a reenactment of the ‘same hat’ meme, with the two of them pointing at each other and saying ‘The same arm!’

When the impulse to run away and self-isolate gets the better of Chief, Reyes insists ‘You should at least apologize.’ The Chief looks like she would rather die.

When she does finally sit down on neutral ground with Oeste, getting the apology out is like pulling teeth. She digs her sweaty palms into her knees and says ‘There is no way to rectify this but. I’m sorry. forcuttingoffyourarm’

To his credit, Oeste is very forgiving, if blasé. He says, ‘Oh, it’s no trouble! I think we both learned our lesson. It is very bad to flock like that! What a terrible delusion we have all suffered!’

The Chief strains. She says ‘There isn’t… Some kind of human hivemind… I did that.’

Oeste looks at her blankly and says ‘I fail to understand how that correlates with anything I have said.’

All at once, it finally clicks for the Chief. Geometry and trigonometry overlays converge with sentence fragments about imperialism and settler-colonialism to arrive at the final conclusion, captioned ‘Military industrial complexes is the same’]

every hellstate is collapsing, butch. lets get you some deprogramming

Putting the rest of this caption on a light background for your poor eyeballs' sake.

Thinking about my old buddies Oeste and Metahei Rho and [these] [guys] again. There was a time when they were called the Suhti, but ‘Suhti’ feels exactly like something I would conlang in 2013, so I’m also thinking of renaming them. Nixthi? Nixtli? Nithi? Who knows. Anyway, it was only a matter of time before they found a home bullying the Empire.

Noodling on this sketch page made me realize I was sitting on more ideas than I thought I was. These guys have been living in the back of my brain for all of 9 years, so I guess that’s typical. There’s like 9342345245 separate threads that are coming together in a way that’s hard to untangle, so I’m just going to start writing and hope for the best.

Oeste is the chipper-looking hexapod who’s missing an arm. He’s a former agent of the ‘old guard,’ who gave up the gun and dishonorably discharged himself. He’s considered a kooky old lady with an air of death around him, but is ultimately well-meaning and tolerated. Put a pin in that thought.

Rho is the biped and Oeste’s understudy / one of few people who really trusts him. She and Reyes have some history, where the ashrunners in Reyes’ family regularly met with the wasteland scavengers in Rho and Oeste and co. They’re like family friends. Put a pin in that thought, too.

Trying to describe the, I guess, thesis of the Nithi is hard. I am very leery of the way fantasy+sci fi interacts with the concept of race and especially nonhuman race. If it lingers on biology for too long then I get kind of freaked out, so it’s hard to imagine in that space, even though I love to think about nonhuman cognition + the interior worlds of plants, animals, fungi, etc. But I’m trying! God Do I Try.

Lately I’m drawn to solitary animals who seem to get a genuine kick out of the company of other animals, e.g. octopus interactions with humans. I think that’s so fun to extrapolate on. Allergic to the company of your own species, but hanging out with the funnie primate? Oh Yeah. That’s Good. Put a pin in that thought x3.

One of my bigger bones to pick with 40k is that you really don’t need to narratively justify the dumb shit the Imperium does with some kind of outside existential threat, whether that be Bugs of Unusual Size, or aliens, or Actual Demons. Giving the Imperium a “reason” to exist just feels dishonest about how empires come to be and how they perpetuate themselves. On the flip side, this is a great lesson in how empires construct narratives about themselves. Reading 80% of the 40k lore as wartime propaganda about the ‘other,’ intended to justify this atrocity or that, is what keeps me sane in the trenches of the wiki.

ANYWAY. Speaking of the unceasing machine of Imperial Propaganda, I am always looking to bully the Empire in fun new ways. I think it would be very funny for the Empire to encounter a people who are, like, categorically asocial around their conspecifics and only societal with other sentient species, because Bad Things Have Happened whenever they organize among themselves at scale. And the Empire misunderstands this to mean that they assimilate into some kind of violent hivemind when they gather en masse, but the actual reason they refuse to associate societally is because they’re living out the dying throes of their own collapsed empire. When the Archive describes the Nithi as a monolith ‘so monstrous, a force so bloody and singular of purpose that humanity shivers at the touch,’ that’s just them taking a look in the mirror and not liking what they see. The shots are coming from inside the house.

Of course, it’s great to have some kind of alien ‘other’ for the Empire to justify its existence and lionize its endeavors abroad. Every effort has been made to drive a wedge between the citizens of the Empire and Nithi at large. Probably because if they realized they had more in common with each other than the Powers That Be, as two peoples carrying the baggage of two shitty empires, they would unionize. And That Would Be Baaaaad.

… Which brings me back to Oeste. He is an ex-soldier who fled to wasteland Earth to dodge the high price of desertion, i.e. execution. He had great timing, given that the collapse of whatever dominion was lording itself over the Nithi came right on his heels.

He carries the ‘old troubles’, or wartime knowledge, that most people, Nithi or no, are wary of. But as the Empire trains its eye on Earth, this raises some very real and difficult questions about the right of sovereign Earth to defend itself, and how. Among Earth’s Nithi in particular, this is an existential question of coming together and doing a rare and terrible thing for some sort of greater good. There is enough continuity between ‘old guard’ veterans like Oeste and armed guerilla resistance in the Empire’s frontier that the Empire perceives no meaningful difference; opposition is the same, whether it comes from another empire or a scrappy resistance force. The Archive is still operating on the hivemind hypothesis, so… not likely that they’re going to grasp the intense political landscape of Nithi mutual-defense accords any time soon.

It sucks. But the silver lining is that they get to heckle Imperials with ooky-spooky hivemind jokes. And fool them into thinking they’re acting of much greater numbers and coordination when they are… absolutely not!

Anyway, Oeste came to Earth to ‘get away from all that’ and keep an eye on the youth, e.g. Rho. He hasn’t been asked about his war wounds, and he’s perfectly content not offering his opinion about them unsolicited. (At least, not when it isn’t funny.) Probably there will come a day when that will change, but he hopes not.

Of course, these things have a way of coming back to haunt a guy. Oeste doesn’t talk about his arm for the same reason that the Chief doesn’t talk about hers, or most of her past deployments. Military trauma that you can’t even pretend to be proud of. They met once on the fields of war and left a, errr, marked impression on each other. Who struck first? … That’s between the Chief and Oeste.

Seeing each other in ~peacetime causes a little bit of a situation, but they’re kindred spirits. Oeste has a lot to impart to the Chief as someone who is much further along the whole ‘deprogramming and reintegrating into normal society’ process, and who is perhaps more familiar with what Imperial programming looks like than others. Besides, someone really has to tell the Chief that the Archive might have been wrong about a few things. A lot of things. 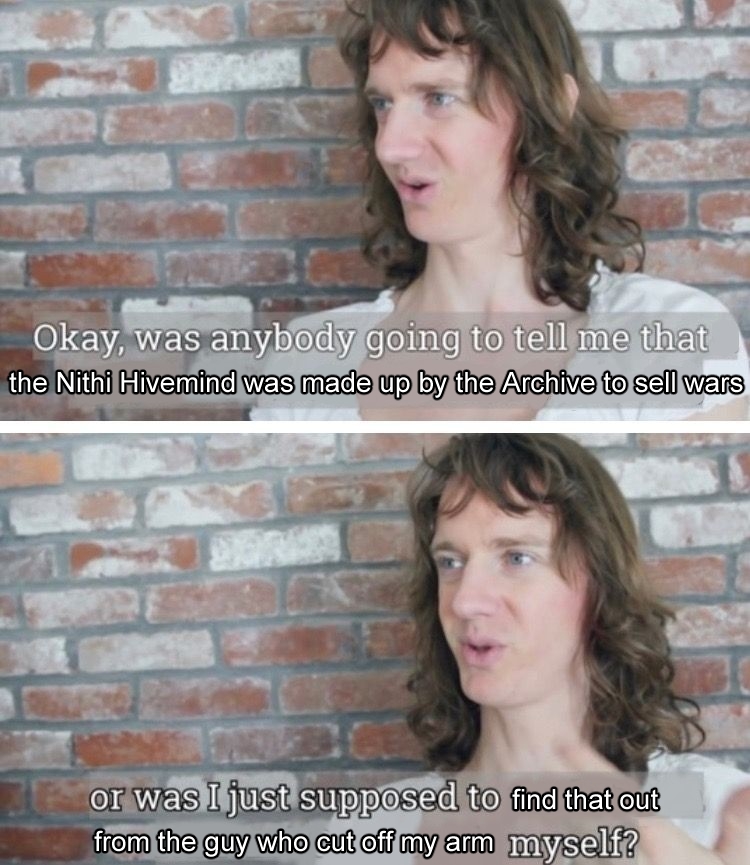 Reyes and Rho are just happy to see the old geezer (and Irene, lbr) make a friend.