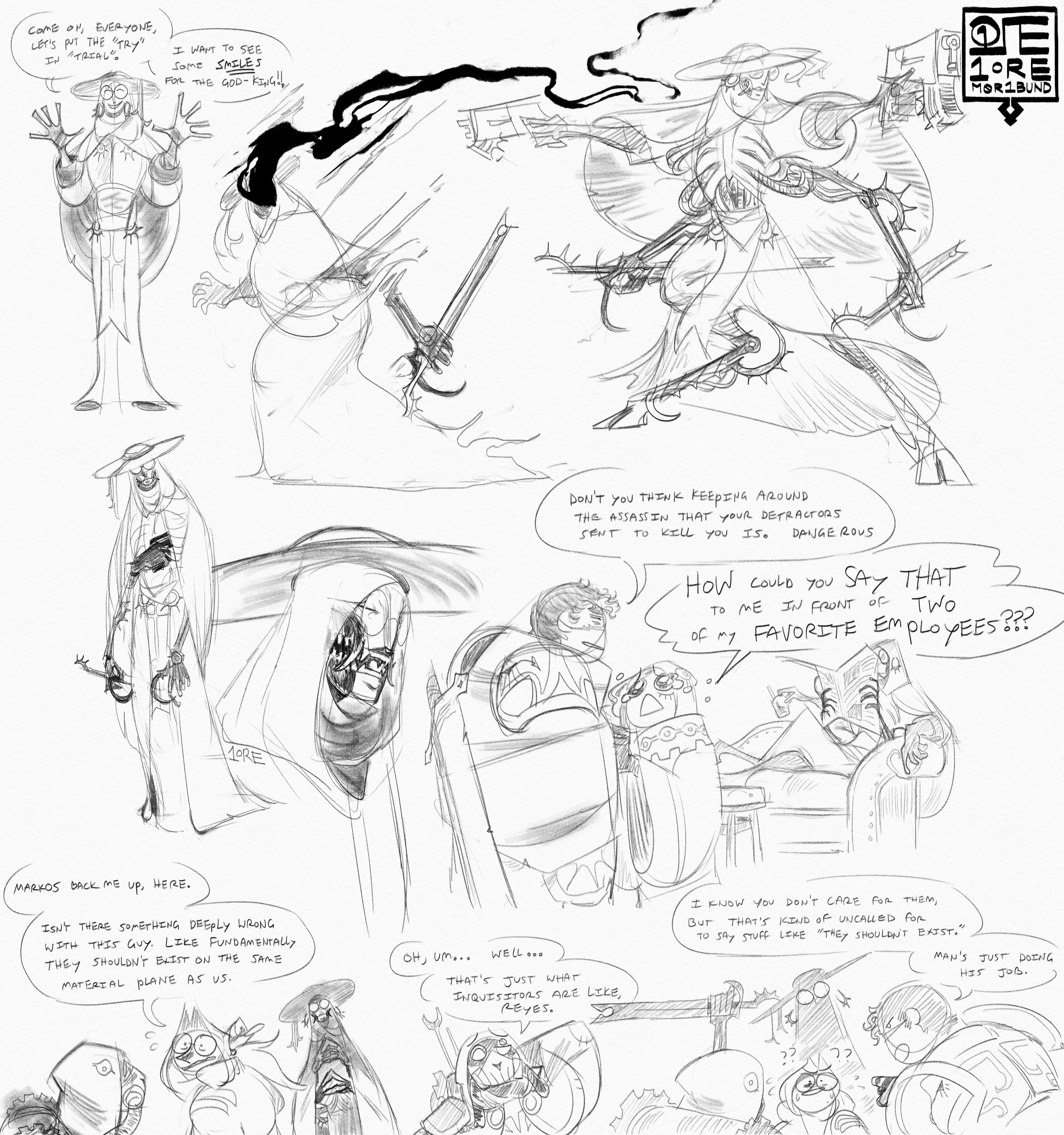 [Long description: A sketch page of a funky papal-lookin’ cyborg, called a secutor. She’s tall and lithe, with circular shades, long robes that conceal most of her body, and a head scarf worn beneath her broad-rimmed galero. To most people she looks like a typical inquisitor, and is completely indistinguishable from her non-secutor peers.

But peel back the layers a bit, and the illusion starts to fall apart—the senses just can’t seem to interpret her inkblot face and phantom limbs. Her true form looks more like a biomechanical armature puppeting around an inquisitor’s body. The inquisitor’s face becomes a stony mask, behind which her grinding gears and killing teeth peek through the cracks. All four arms brandish a dirk or pistol, and her mechanical legs have spurs fastened to each joint.

The secutor’s uncanny façade sets off someone’s alarm bells, at least. In one vignette, Reyes indicates the secutor over her shoulder and stage-whispers to MarkOS: “MarkOS back me up, here. Isn’t there something deeply wrong with this guy. Like fundamentally they shouldn’t exist on the same material plane as us.”

MarkOS rubs the back of his neck bashfully. He doesn’t see anything amiss. “Oh, um… Well… That’s just what inquisitors are like, Reyes.”

The Chief chastises Reyes with a wag of her finger. She says, “I know you don’t care for them, but that’s kind of uncalled for to say stuff like ‘They shouldn’t exist.’ Man’s just doing his job.”

Reyes is so caught off-guard by their blasé dismissal that she doesn’t know how to respond. None of them notice the secutor approaching with lethal intent.

In another vignette, the secutor reclines on a chaise lounge with a newspaper in one set of hands, and a drink in the other. The Chief looks dubiously at the secutor, and says “Don’t you think keeping around the assassin that your detractors sent to kill you is. Dangerous.”

To which Markus responds by making pitiful eyes at her: “HOW could you SAY THAT to me in front of TWO of my FAVORITE EMPLOYEES??”]

Someone that the gang meets after the events of Killswitch. She’s a secutor that was designed to carry out political assassinations among the various infighting powers of the Archive.

Get high enough in the ranks in the Archive, and everyone has a secret agenda to kill everyone else for one reason or another. Because of the nature of her work, she is one of the few secutors who has retained the ability to act autonomously and disobey orders. You kinda need a spine to be able to kill people who could have you executed for breathing on them.

She still has a killswitch, though. That’s “insurance” for whoever currently has her under contract… And some other Powers That Be, unbeknownst to most of the Archive. Nobody knows where she came from, and nobody questions why she has the autonomy to shift allegiances—all that matters to them is that she can carry out their orders without dirtying their name. When you’re at the top, orchestrating everything that happens in the world below, it’s hard to imagine any kind of power acting over you. Little do they realize her existence is a bit too convenient.

She has some other tricks up her sleeve, too. Part of her appeal to the Archive is that she is a chameleon in every sense of the word. On a more mundane level, using a secutor to do your dirty work is ingenious; they are the invisible laborers of the Archive, and are invariably programmed out of the ability to dissent. There can’t be a safer and more forgettable workforce to push around. Even knowing that such an assassin exists, no Archivist ever expects their dishwasher to beat them senseless and then drown them in the kitchen sink. It just goes against everything that stands to reason in their minds.

But fitting in with the invisible masses of the secutors is hardly a feat when she’s already one herself. She has another talent—an uncanny ability to assume the likeness and mannerisms of anyone she can get her hands on. She doesn’t necessarily have to kill someone to do this (though it certainly helps to remove her “stunt double” from the picture.) Just spend enough time around her, and she can fashion herself into a convincing parrot of you.

A little bit of mimicry is not enough to fool an Archivist, though. Her final trick is one that very few people are aware of, because the ones who are most susceptible to it are the Archivists themselves. To create a truly foolproof façade, she can manipulate the cybernetic augmentations of those around her.

This seems like an unreliable strategy, until you remember that probably 90% of the Archive is cybernetically altered to some degree or another. Break the unbreakable code, and you can alter their fundamental perception of reality. You can make yourself into someone safe, familiar, trustworthy, unremarkable, even completely invisible in their eyes. What's more, this kind of tampering is an impossibility to the Archive in the same way that time can never run backwards, and matter can never be created or destroyed. Nobody has ever cracked the esoteric language of Imperial tech—It simply can’t be done. Ergo, everything they see must be truth.

Lately, she’s been puppeting around the likeness of an Inquisitor (pictured above.) She assumed this guise when she was contracted to kill the late Markus Severinus. The hit wasn’t a success, per se, but it wasn’t a failure, either; it ultimately ended with one of them under the Doc’s knife. Markus had the assassin’s killswitch removed, and turned her loose on the Archive to do as she will.

This was a deranged gamble on his part, but it ended remarkably well for both of them. The existential nightmare of being a pocket knife for the Powers That Be had long taken its toll on her. She gave her former contractor what for, and retired to a quiet life of doing absolutely nothing under Markus’s administration. It was easy for her to disappear from their purview when she no longer had a killswitch or any semblance of an identity left. And to her new coworkers, she was just another secutor. (albeit one who nobody could seem to figure out the purpose of—But Markus said don’t meddle with her work sodon’tworryaboutit.)

After Markus’s passing, she and the rest of his administration were divvied up among the Archive. She technically retains her autonomy, and nobody knows that her killswitch was removed, but she no longer enjoys the freedoms granted to her when he was in power. Still, maintaining her front as a lowly secutor is preferable to doing the Archive’s dirty work.

Though, given that little act of heresy performed by a certain disgraced supersoldier and her research assistant, there’s at least one person in the Archive who could make use of the assassin’s talents, right now…