~Plant growth on a human body. 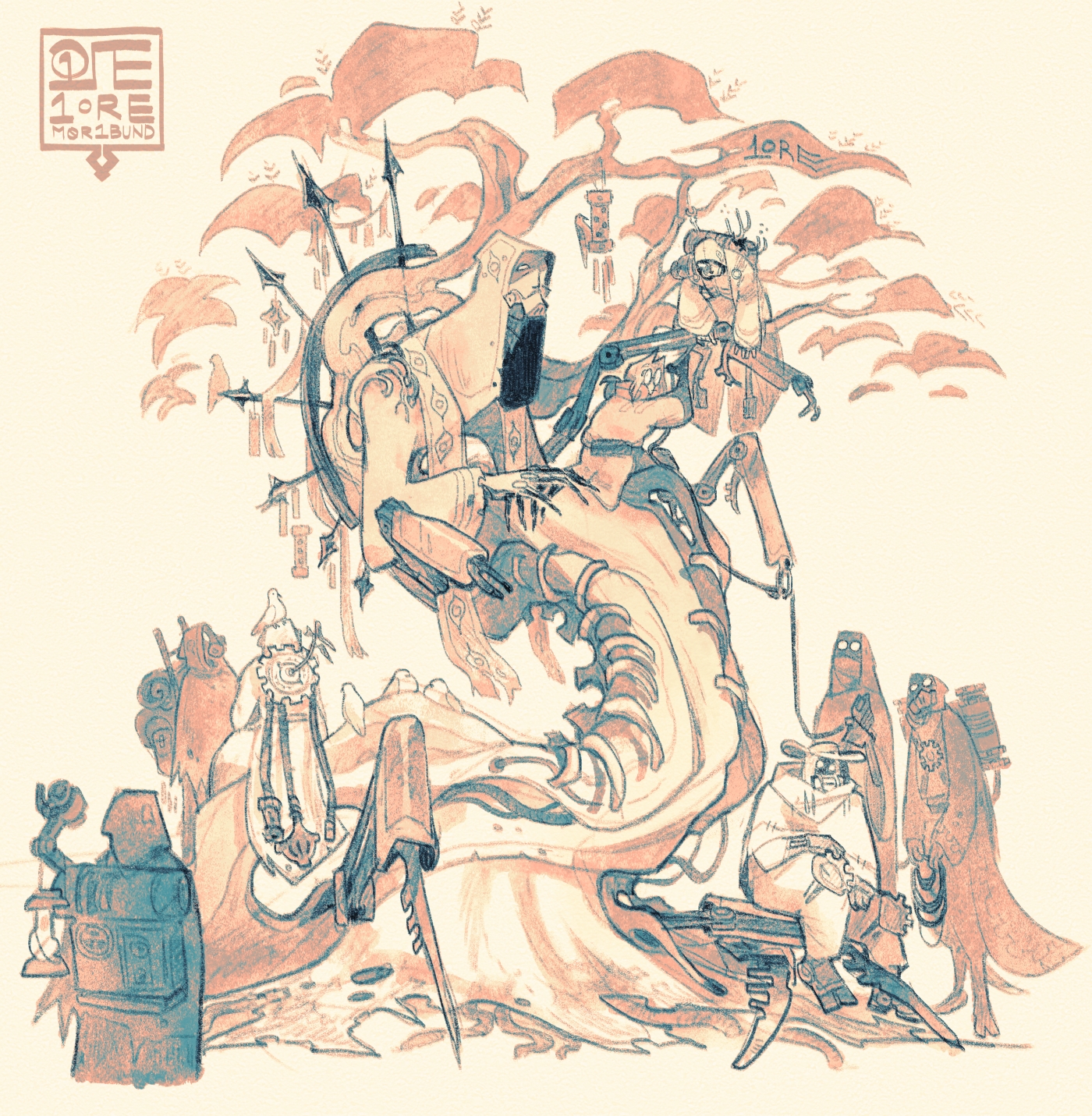 [Long description: A gathering of funny little hooded cyborgs that are hanging out around the foot of a great pine tree. The tree twists and turns around the form of an even larger construct, a hooded figure who has been partially engulfed by its bark. The figure sits in the crook of the tree, with their mechanical hands folded politely in their lap. Below the waist, their body is like a cross between a centipede and a snake, many-segmented limbs entwined with the winding bark and roots.

Reyes, the mechanic, sits on the figure’s huge knee. Another cyborg, MarkOS, helps her lift one of the figure’s insectoid legs so that she can repair it. The gathering watches them through their big ol' goggle lenses, bemused.]

The Endling Cult gathers in June, just before the rainy season. Nobody really knows where they gather, or why, or how it is that they know where to go, exactly. Their journey is as mysterious as that of the migratory birds they study, and every bit as long.

So when Maila blows in from out of the wasteland, it comes as something of a surprise. This is the first time in anyone’s memory that an outsider has been allowed to tag along for the journey—and stay for the gathering.

She has been called here to repair one of their own, a venerable ex-secutor that they call ‘the Col.’ Though the endlings have no leaders or governing bodies to speak of, it is often necessary for elder secutors like the Col to watch over their proceedings. Few are old enough to command the respect of their peers. Fewer still can keep the peace when tensions run high.

Maila would like to be honored by the summons, and to some extent, she is. The pressure of being trusted with such a high-profile repair job is enough to make her hands shake. But the truth of the matter is that there isn’t much the endlings need to worry about, around her. Not because she’s privy to the cult’s secrets, but because she has no hope of ever understanding them. 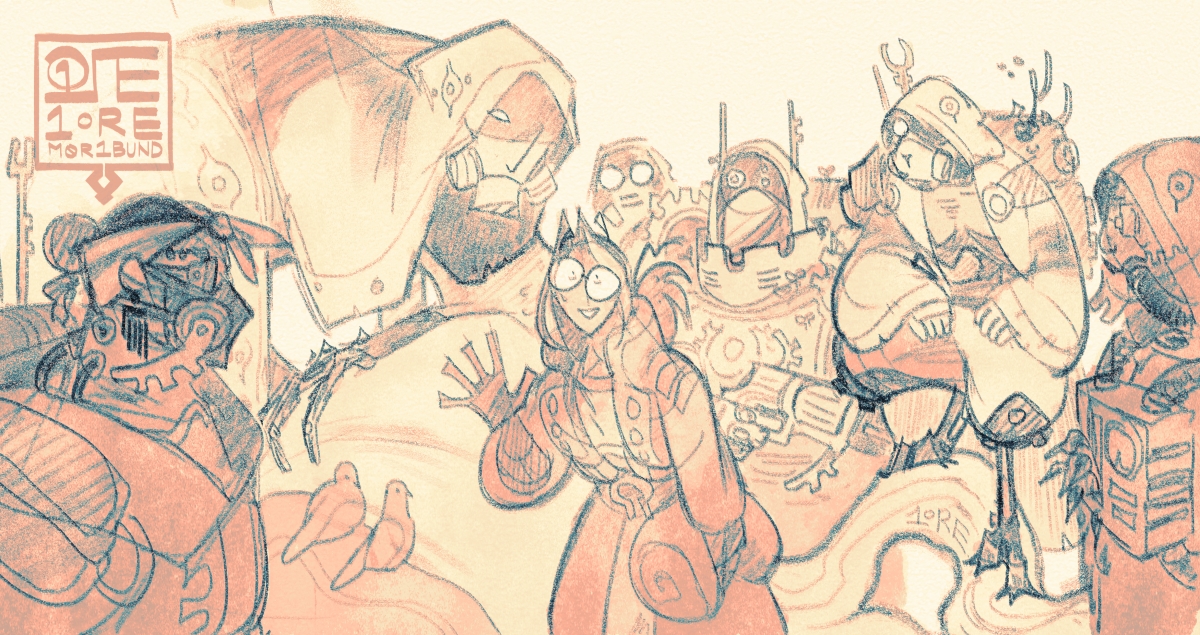 [Long description: The Col leans over to inspect Reyes, and so does everyone else. She waves awkwardly at the gathering and hazards a smile. They all just stare at her through empty eyes.]

The hum of conversation fades. Maila looks up. The Col waves a delicate hand overhead, and it’s like a switch is flipped. All eyes are on them.

The Col’s speaking voice is slow and methodical, their voice modulator rattling around the synthetic edges of their words. They introduce her to the crowd and explain the reason for her intrusion.

The endlings simply watch her. Maila gets the feeling that she’s supposed to say something. She begins to speak, but pauses. Then, as if by some invisible signal, the crowd carries on. The dialogue continues without her.

Maila can’t keep up with it, even if she wants to. 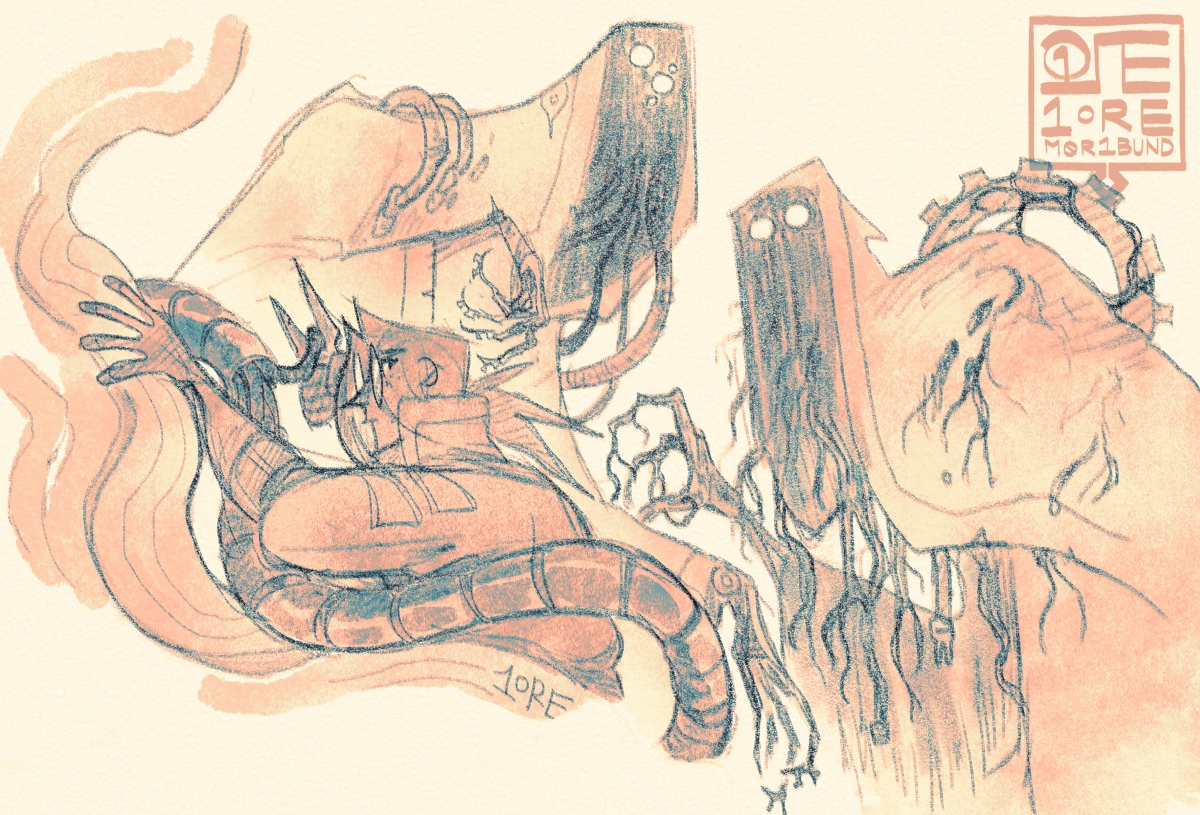 [Long description: Reyes takes a pair of clippers to a metal cable, which winds around the pine’s trunk. Two huge, gangly endlings watch her. It’s hard to make out their faces in the darkness of their hoods, but bundles of wires and cables seem to be coming out of one individual’s face. The other has a whole mess of roots and branches hanging down from theirs. They idly clack their gnarled, rootbound claws as they converse.]

Theirs is a Devonian language of clicking, humming, and static bursts. When the Col speaks, now, she feels it more than she hears it—a thrumming in her chest, like thunder rolling through a valley. MarkOS sounds almost musical by comparison, his human voice chopped up and intercut with what sounds like radio feedback.

They all talk over one another, but there is no crosstalk. Their cybernetically-altered brains hold onto each and every incoming signal. With mechanical speed and precision, they dissect its meaning, commit its contents to indelible machine memory, and articulate a response. Maila only perceives the exchange as white noise. With each passing moment, her brain has to choose what to keep and what to forget—a decision made unconsciously, and without her permission.

Much of the conversation happens beyond her senses entirely, in the exchange of phytochemicals and electromagnetic pulses. Fungal mats entwine their threadlike fingers with one another, deep beneath the earth. Optical implants keep watch over the crowd’s shimmering heat signatures. Leaves open their stomata to exchange water for carbon dioxide, and maybe some other things, too. The air itself comes alive with conversation. 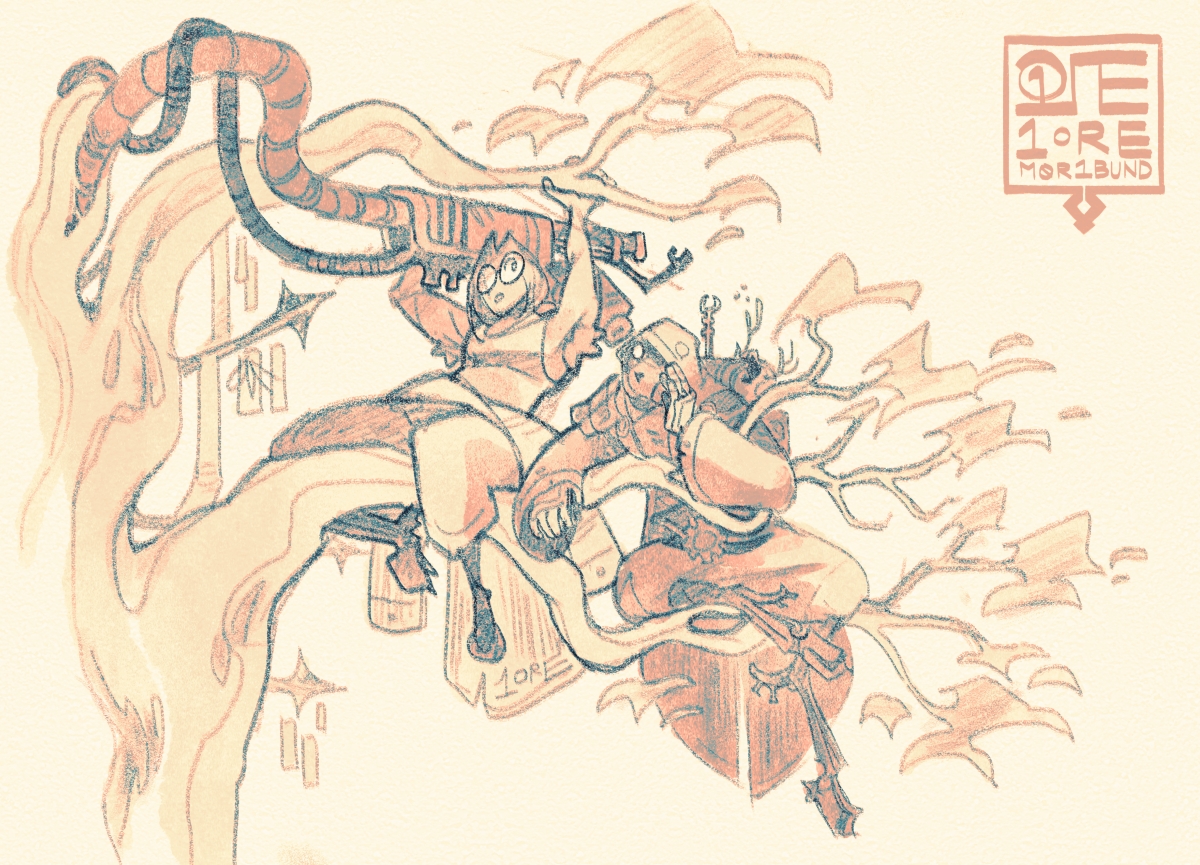 [Long description: Reyes balances carefully in the boughs of the pine. She holds up some sort of welding tool that’s attached to several motile cables, which in turn are engulfed by the pine tree itself. She goes to inspect the tool, but takes pause. Balanced beside her is MarkOS, who leans in and confides some juicy gossip in her.]

MarkOS occasionally pauses to interpret for her, but his explanations are clumsy, and they usually raise more questions than they answer. She knows that what he chooses to tell her barely scratches the surface. In one mechanized breath he can deliver an argument that Maila would struggle to explain in an hour. Add a hundred secutors to the mix, and the discourse mutates rapidly from moment-to-moment, concerns raised and settled in mere minutes.

On one hand, there is the slow language of rocks, mountains, and plants. On the other, the cryptic secutor pidgin, spoken only in hushed whispers and frantic radio bursts. Both are languages she barely understands.

im making up microsocieties in my head as usual. and listening to a lot of the album Reality by Wolfgun. Apart from the usual Mechanical Screams of the Damned in the Mechanicus soundtrack, I really like the more pensive tone of Reality. catch me in the dirt about 'Mars' and 'Our Kind.'