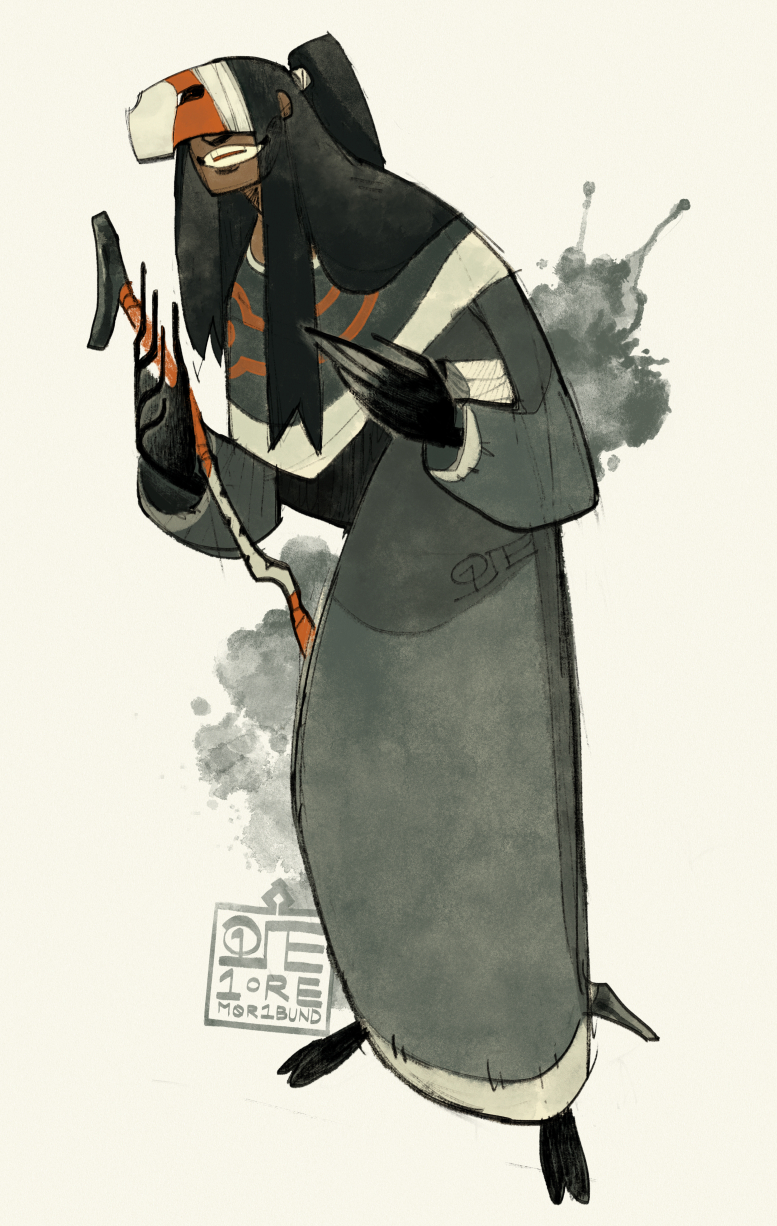 Philosophize In It! Chemicalize With It! by Kishi Bashi
This Is Gospel by Panic! At The Disco
Unspoken by Wolfgun
More ▶ 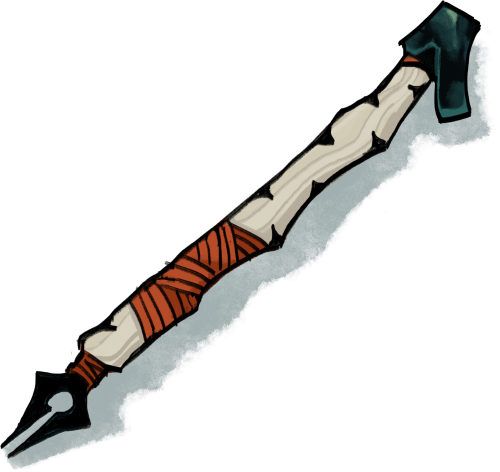 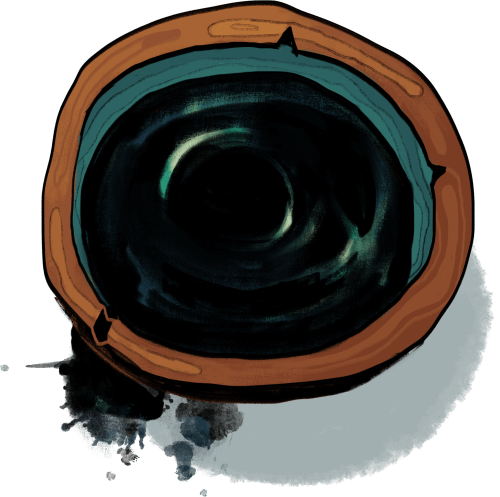 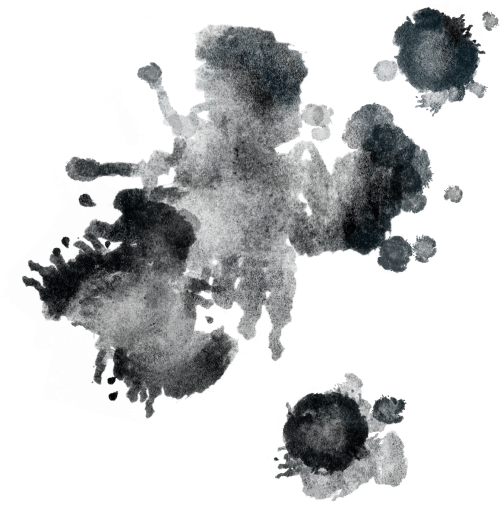 According to wartime census, Sadren is dead. Excommunicated from high Asthaom's faithful Lexarcs, he fled West and became a casualty of the desert's only war. He would have you believe that he really died out there. In many ways, he did.

An addict turned poet-priest, Sadren first came to the Lexarcs seeking penance for his hedonistic past. Few had faith in his turn of heart, but of all of them, Sadren took Lex’s teachings to heart the most faithfully. He chased a better life through rigorous study, zealous devotion, and good old-fashioned Temple Asceticism.

But in those days, the Lexarcs had long turned their eye from theology to more “practical” matters. They had every reason to. Agriculture sapped the fertile coasts of high Asthaom, and each day the gods bled themselves dry for a thirsty diaspora. With no water left in the desert to sustain its people, they would soon be forced to choose exile—or death.

Their fortunes changed when a humble priest recovered a body from the ocean black. By total fluke, Sadren had found Saint Lex in the flesh.

Her return turned high Asthaom on its head. It was no coincidence that she should appear during their darkest hour. The desert erupted with riotous celebration, and Sadren was no exception.

But as he quickly discovered, this Saint Lex was not at all the same as the one from his stories. A strange woman inhabited the Saint's body, and she was restless, deadpan, and notoriously malcontent with the way of things—a far cry from the charisma and compassion of Lex. Sadren didn't care. Everything about the woman challenged his beliefs, and he couldn't help but adore her for it. In turn, she grew fond of Sadren’s huge heart, and the two became very close. Their unlikely friendship vaulted Sadren through the Lexarcs’ ranks, and he enjoyed a sense of purpose and belonging for the first time in many years.

A deep sickness haunts Sadren, as it does the rest of high Asthaom. One by one his Lexarc brethren are taken with delusions of mythical water and xenophobic dogma. Crying out for change, and emboldened by the return of Saint Lex, Motu’s Lexarcs march West to Scaiuq. What begins as an excursion into terra incognita quickly becomes a desperate war for water.

In this land where gods abandon men, Sadren is forced to confront the ugly truth of his order, and of himself. There comes a night when he and Roan can stand idle no more. They steal away to Scaiuq, warning anyone who will listen of Motu’s plans. They become the first to dissent, to cry out from within Lexarc ranks… and the first to realize that Motu’s love is conditional.

Sadren is martyred by the god for his betrayal. His ‘death’ is so unspeakable that no deserters follow in his footsteps.

Excommunicated, exiled, and now left for dead, Sadren is a broken husk of his former self. His grief is so great that he truly believes he should have died a martyr. Unfortunately for him, he lived—and although he can’t imagine a future for himself with or without the Lexarcs, there are still those who won’t give up on him so easily.

Despite this, he is one of the first to recognize Roan as her own person, rather than a shadow of Saint Lex. Her dissident nature challenges Sadren’s beliefs, and brings out a gentleness in him that he hides from the world. Roan might not admit it, but sometimes the only thing stopping her from giving up and throwing it all away is this deep well of compassion. Sadren’s company keeps her grounded in the face of a destiny she didn’t ask for—even if the man can’t see past his own fanaticism, yet. 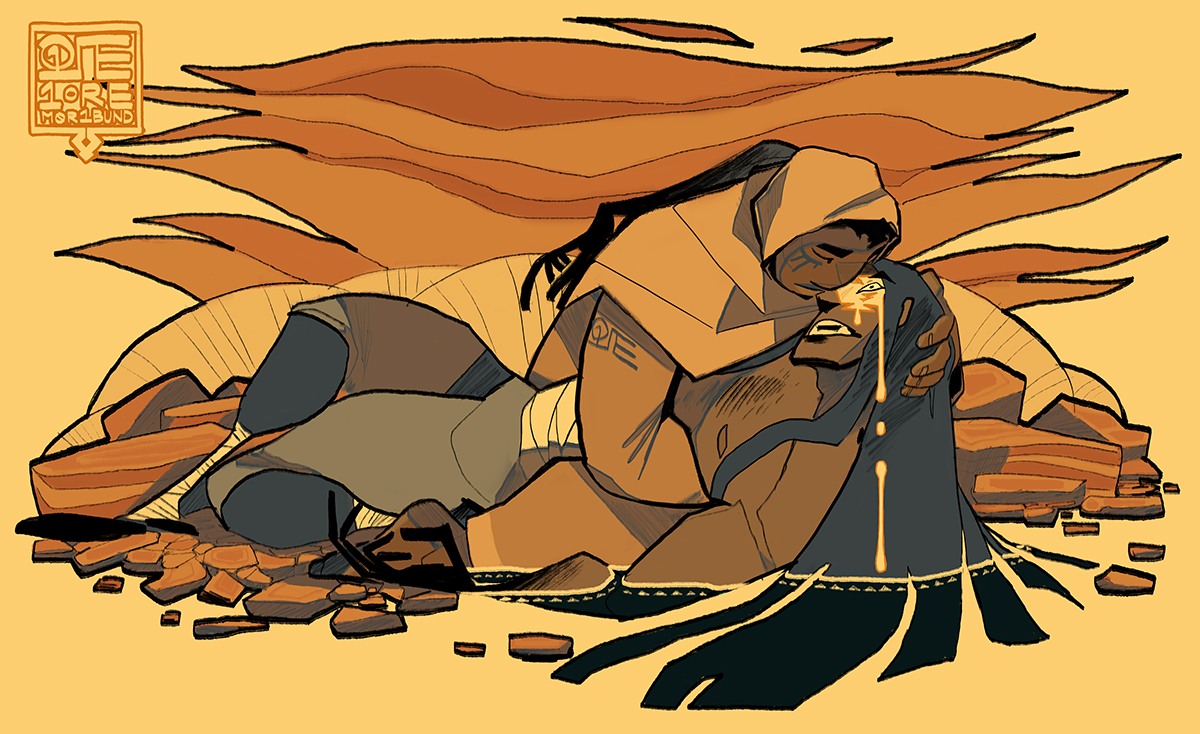 The two met as young men. Sadren was an inkprinter, then, a soft-spoken and mild-mannered man from a working-class family. Dai Hei was, well, Dai Hei. Everyone who was someone in high Asthaom knew the man. He was the brash and charismatic heir of the wealthy Dai family—widely considered a worthless layabout and a disgrace to his family name, but good for a cheap thrill.

By chance, Hei bumped into Sadren at his family inkprinting shop. The two exchanged a few words, and that was it. Hei couldn’t get the man out of his head. He made a point to bother the inkprinter whenever he could. Sadren was stunned by the attention, but flattered.

What followed was a whirlwind romance for them both. To the public, it was something out of a folktale—Dai Hei, the wealthy heir, sweeping working man Sadren off of his feet. Hei’s antics drew out a giddy, theatrical side of Sadren that he didn’t know he had, and Sadren’s quiet creativity brought Hei back down to earth. Together, they nurtured a deep love for the arts and for each other.

But the intensity of their love affair belied other things, harder things. Hei and Sadren both harbored addictive personalities, and Hei’s hedonistic lifestyle eventually led the two of them to fall deep into addiction. It is a difficult time in their life that neither of them are willing to talk about, much.

When Sadren later finds sanctuary in the teachings of the Lexarcs, Hei can only follow his lover into the order’s arms, mystified. Sadren is taken with their grand theological ideals, but Hei finds his comfort in the practical, and the communal. It helps that his family name does favors for him, here. The two even catch Motu’s eye when they rescue the god’s daughter from the ocean black. They seem destined for greatness with the Lexarcs, and for a time, life is good again.

But something changes between Sadren and Hei, something they can’t see until it’s too late. Hei wakes up one day as General Dai Hei, and is outfitted for war among Motu’s most esteemed Lexarcs. He finds Sadren and Roan stealing away in the night, speaking of death and drought. Speaking of Motu as a despot, a dog-headed god-tyrant who sows hate in the hearts of men and sends them away to be slaughtered for his cause. Speaking heresy.

Sadren begs Hei to open his eyes and see reason, but he cannot. He sees only his lover abandoning him in his hour of need—left to fight in a foreign war, alone. Hei tries to stop the two traitors, but they slip like water from his grasp. 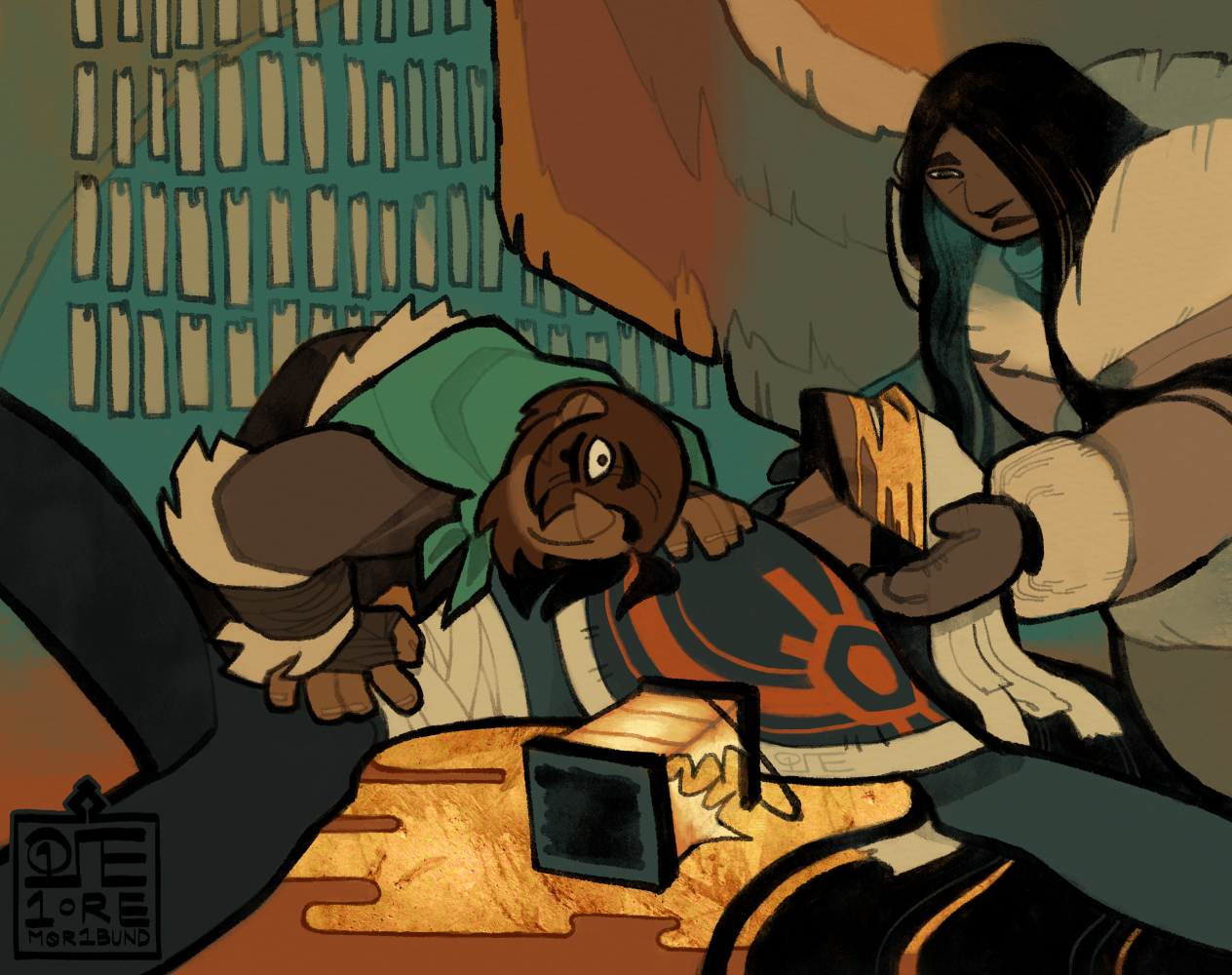 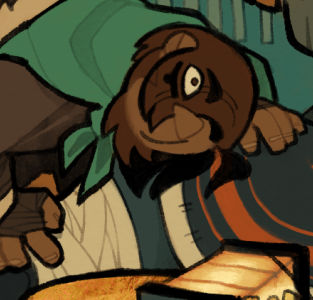 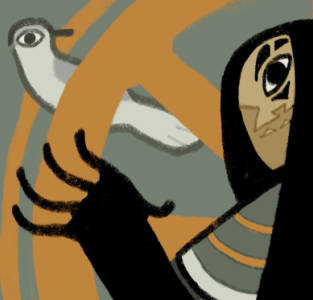 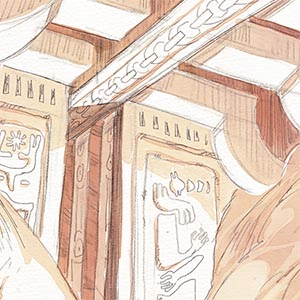 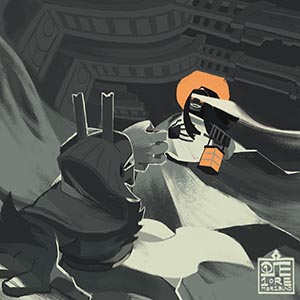 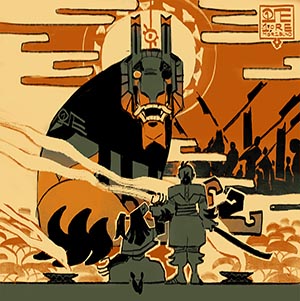 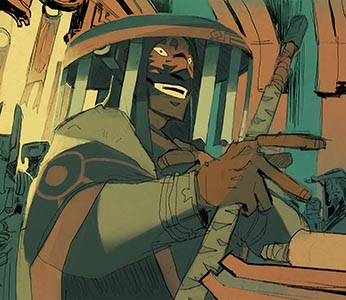 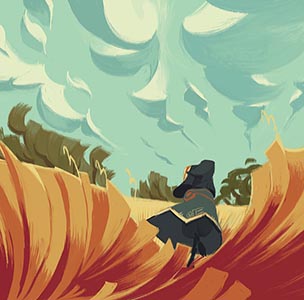 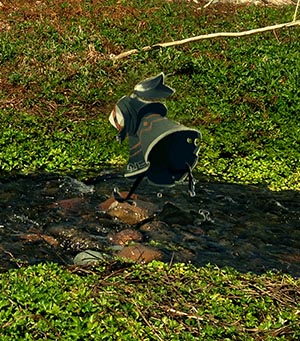 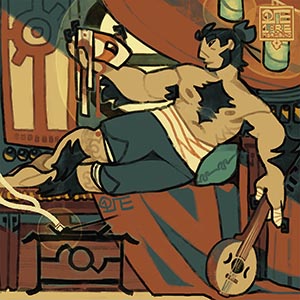 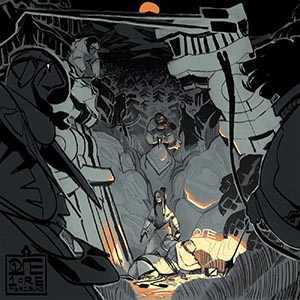 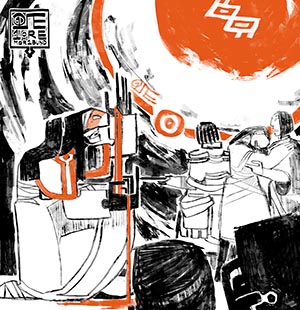 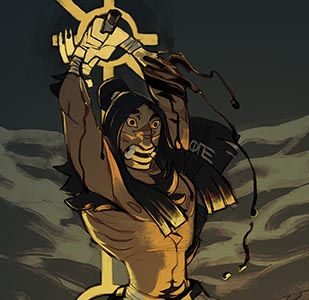 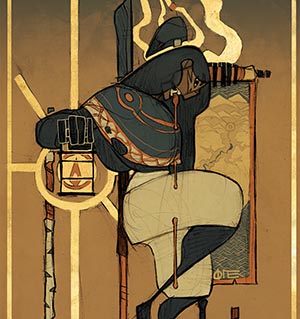 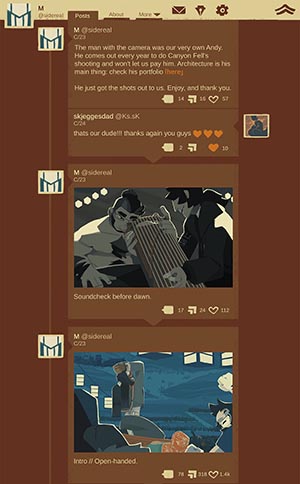 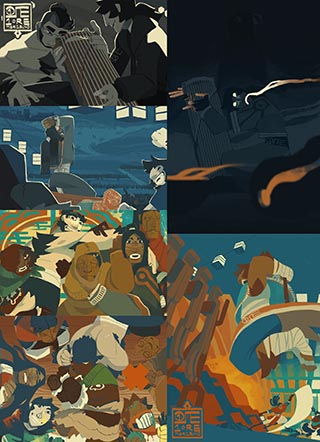 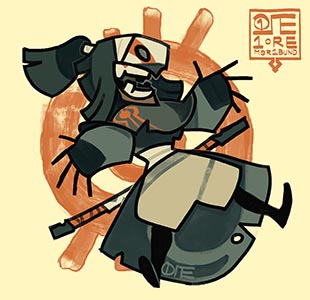 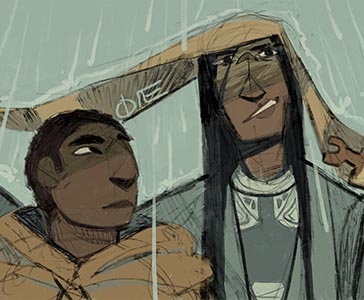 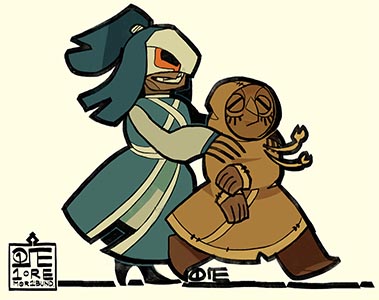 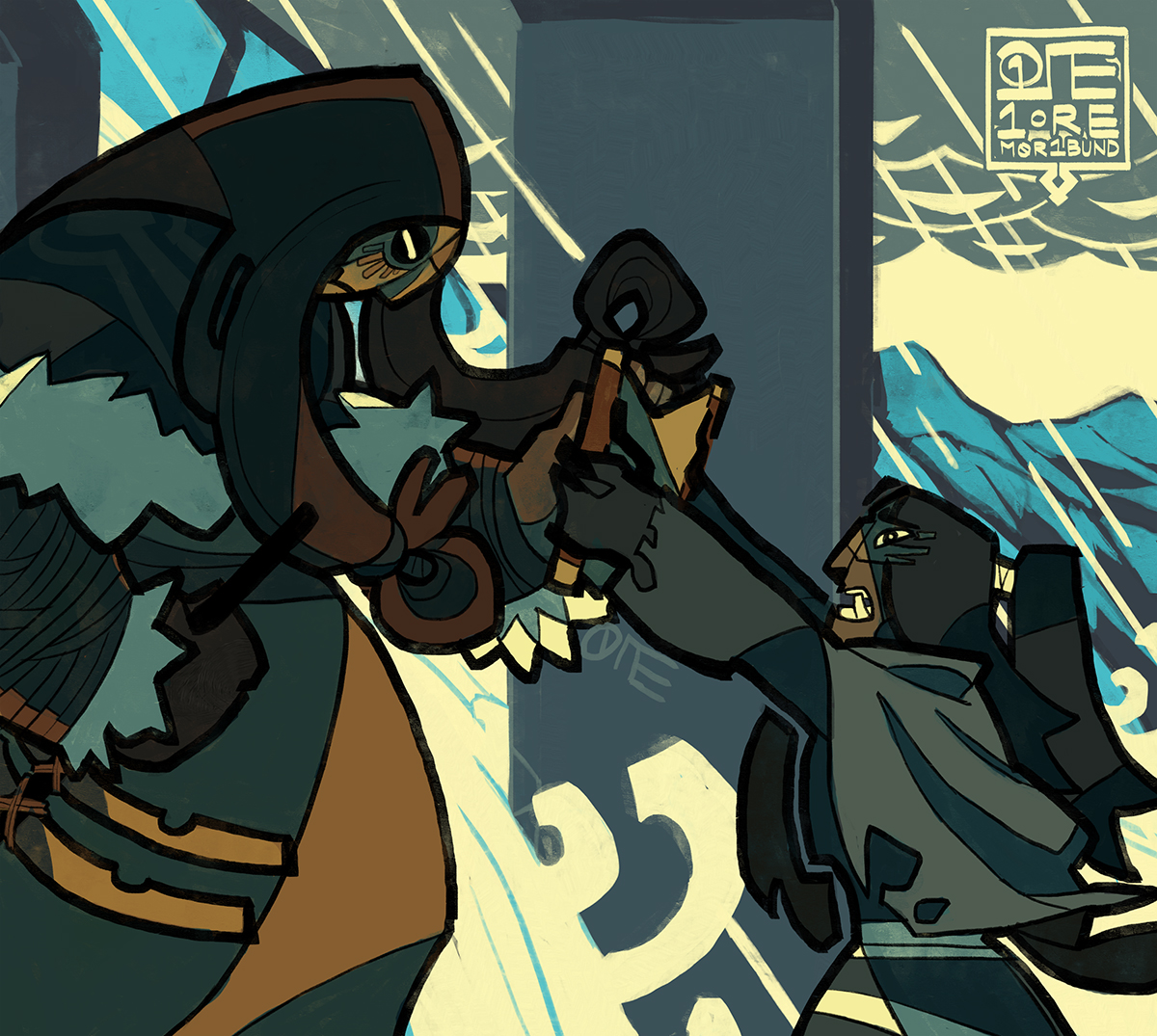 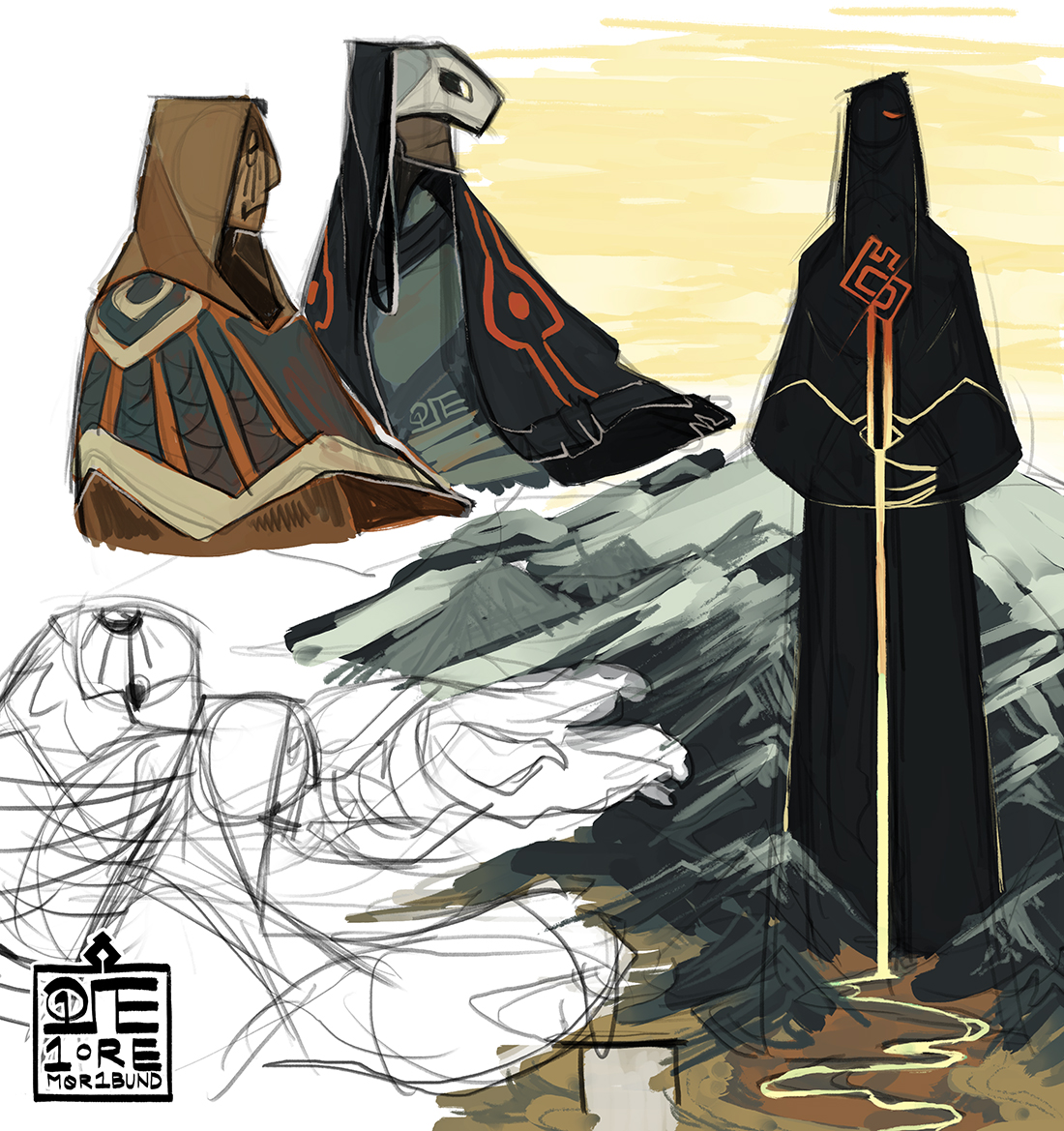