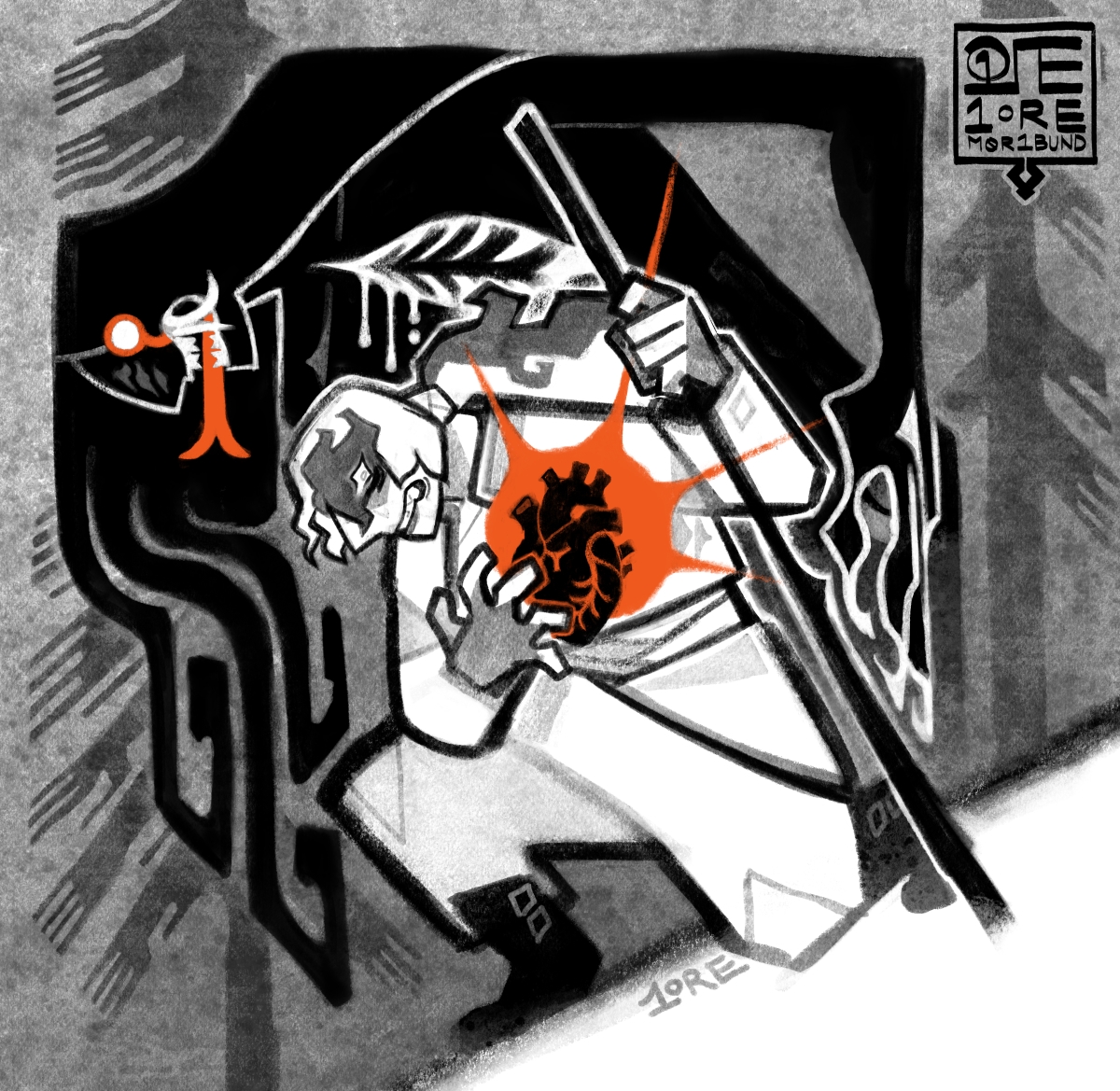 [Long Description: The monk, Makame Asanttu, out on the ash tundra. He clutches the heart of a dead god and struggles through an ash drift. The weight of his burden hangs over him like an impenetrable shadow; long has the Great Beast of All Men waited for his heart to be returned to him. Or so it seems, anyway.]

For some reason, our man Makame Asanttu and The Great Beast of All Men wrestled me into a chokehold and made me draw them for 3 or 4 days.

For those who don’t know: Makame is a monk from the city of Basedt, which has been isolated from the outside world for 100 years by an eternal storm and a hateful ash tundra. Cinte is the god who created the storm, the tundra, and a lot of other very bad things. Everyone hates him and he hates everyone. And I guess Makame does too, until he doesn’t. You can read more about Basedt and its characters here.

Anyway. It’s been a long time since I last talked about them and things change, so get ready for diction with a side of pictures. You know how it is with Basedt.

This was the first piece I drew so I guess it’s a good one to get caught up to speed with.

Makame is part of Basedt’s Stormwall, or Wall Watch. The Watch keeps an eye on the wall that surrounds Basedt, which keeps the ash tundra out and a relatively normal vestige of the old world in. They’re also the only individuals permitted to leave the city and study the world outside.

Makame is a ranking monk (”captain”) of the Stormwall, and probably the only person in Basedt to spend as much time as he has in the ash tundra and come back alive. Even among the pariahs of the Stormwall, he’s considered a weird person, very “woods-touched.”

He doesn’t seem to mind, though. He’s ornery, asocial, and perfectly comfortable being alone for long stretches of time, traits which make him a great woodsman and a bad leader. He’s mostly in this position because it gives him freedom to do what he will, and because Basedt doesn’t have a choice; He’s the best man they have in figuring out what the hell is going on outside the city walls.

It’s unsurprising, then, when Makame becomes the target of powers outside the wall that he barely understands. His time in the tundra catches the attention of the Manazthati, a death cult trying to rebuild the shattered god who brought the sky crashing down on them. They identify a certain… uh… morbid fascination with the abyss in the monk, and use that to manipulate him. Through this, he is compelled to recover the heart of the dead god, Cinte, which is interred somewhere in Basedt.

It is the only fragment of Cinte that they have no hope of recovering by themselves; the Manazthati are barred from Basedt as outsiders. So, preying on Makame’s sense of faith and unique brand of Basedti ignorance seems like a straightforward path to an easy victory.

‘Course, things don’t always go according to plan. Makame does recover the heart, but when he takes it outside of Basedt, it quickly becomes apparent that this was a Very Bad Idea. He takes it where he has been compelled to take it, but he does not do as he has been compelled to do. Instead he takes off into the woods, disoriented, and the inveterate woodsman becomes lost for the first time in his memory ▶︎