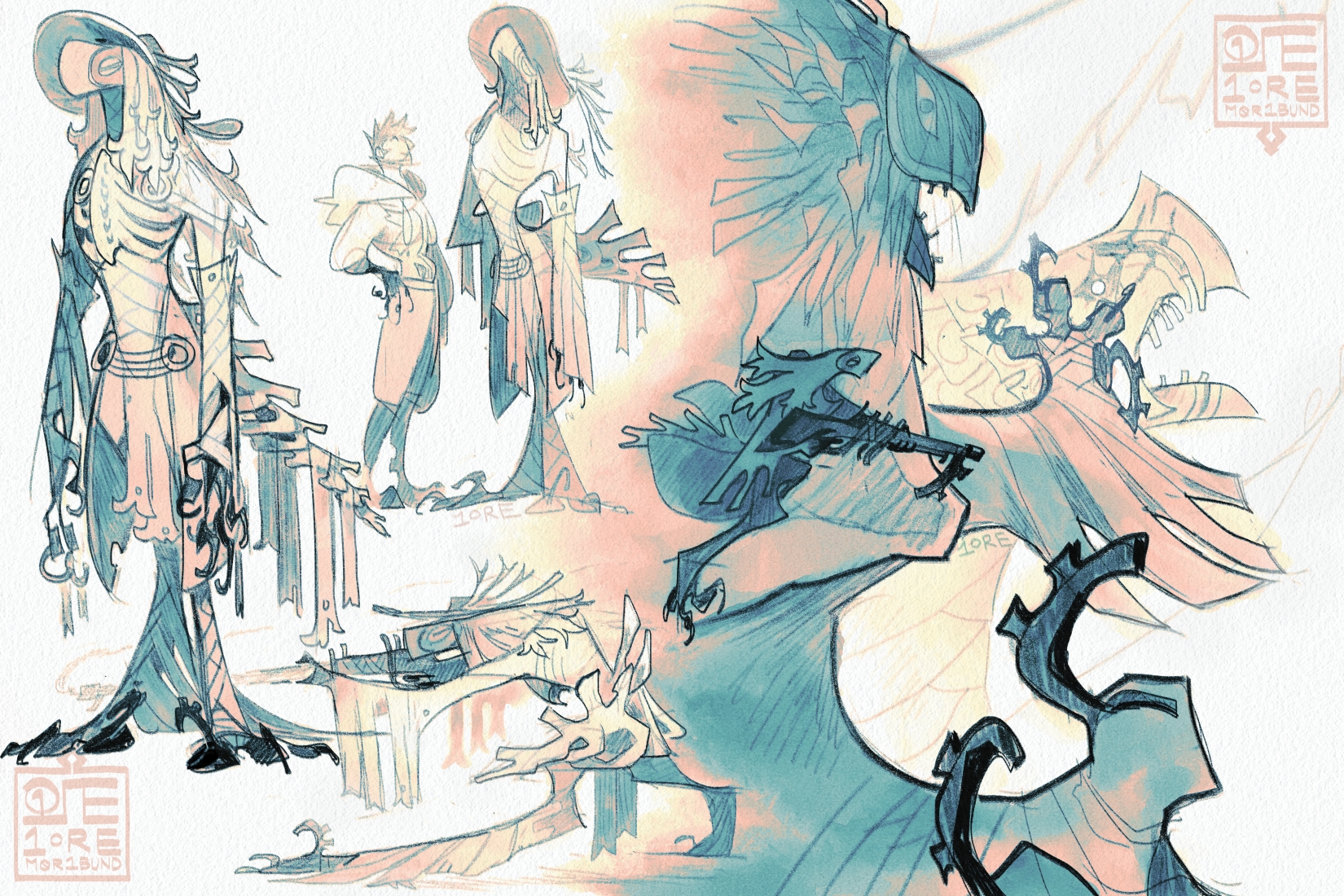 [Long Description: A sketch page of Sohei, a velk pilot who’s mostly just a pile of bones taped together with bandages at this point. He is tall, lanky, and vaguely avian. His face is concealed by a full-face beaked mask, and he wears a wide-brimmed feathered hat and a longcoat over his bones. He stands at easily 7 feet and change, and is quite a bit taller than Sinuk, who’s already pretty tall for a human.

The spread in the right depicts him hitching a ride on the ur catharte, an enormous skeletal condor-slash-biomechanical-spaceship who is being violently contested by another, even fiercer-looking velk vessel.]

Sohei’s my favorite character who I never draw because his design eats wrists for breakfast.

I’ve been thinking about ve velk lately. They’re the ones who “created” the ur catharte and the other velk god-ships, at least inasmuch as one can intentionally create a bunch of biomechanical gods. In ye olden days, velk arks were amalgamations of the bodies and souls of velk who died in space. For a people with an extremely comfortable relationship with death, it was a troubling fact of life that those who died in space could never materially decompose. Assimilating into the community’s god-ship would have been the next best thing, and it was a tremendous honor to be able to carry your loved ones and their descendants for all time.

Later on, velk god-ships were appropriated into machines of war by the Powers That Be. The arks are powerful and sapient, but they can have their will bent from outside or from within. You can tell a ship piloted in “the old way” from a war ship by its outfitting. In times of old, there was never any reason to muzzle them or use coercive piloting techniques; that would have been like… handcuffing your great grandma, or something. Unfortunately, centuries of abuse have driven even the most stouthearted and dependable vessels mad with grief. It’s a sad reality that most velk vessels are less like the god-ships of old, these days, and more like anguished ghosts that are compelled to violence by pain. An unmanned warship can be an extremely dangerous thing to encounter for any party. There’s just no reasoning with something so powerful and deeply wounded.

Sohei and his folks would have been exiles, rebels, and refugees fleeing all that. I think Sohei himself might have some experience with being a pawn in someone else’s game, I’m not sure. Either way, dissidents like him are an oddity in the wider weave of the velk. Not a lot of opportunities to escape, and even fewer people who remember how to pilot arks in the old way.

And even if you do get lucky… Odds are good you end up like him, sooner or later. Sohei and his folks went missing while being pursued by the Powers That Be. Something, uh, went wrong while he was black hole drifting, and now he’s a bunch of bones duct-taped together. Kinda like most of the velk vessels that ended up falling to earth.

Anyway. Sohei’s my old buddy and it’s fun to draw him again. I like ve velk as a mirror/contrast to humanity in Moribund, even if I will probably not do anything meaningful about that for the foreseeable future. Take this ambient industrial cathedral music from the Mechanicus OST that my brother showed me and that I can’t stop listening to now.