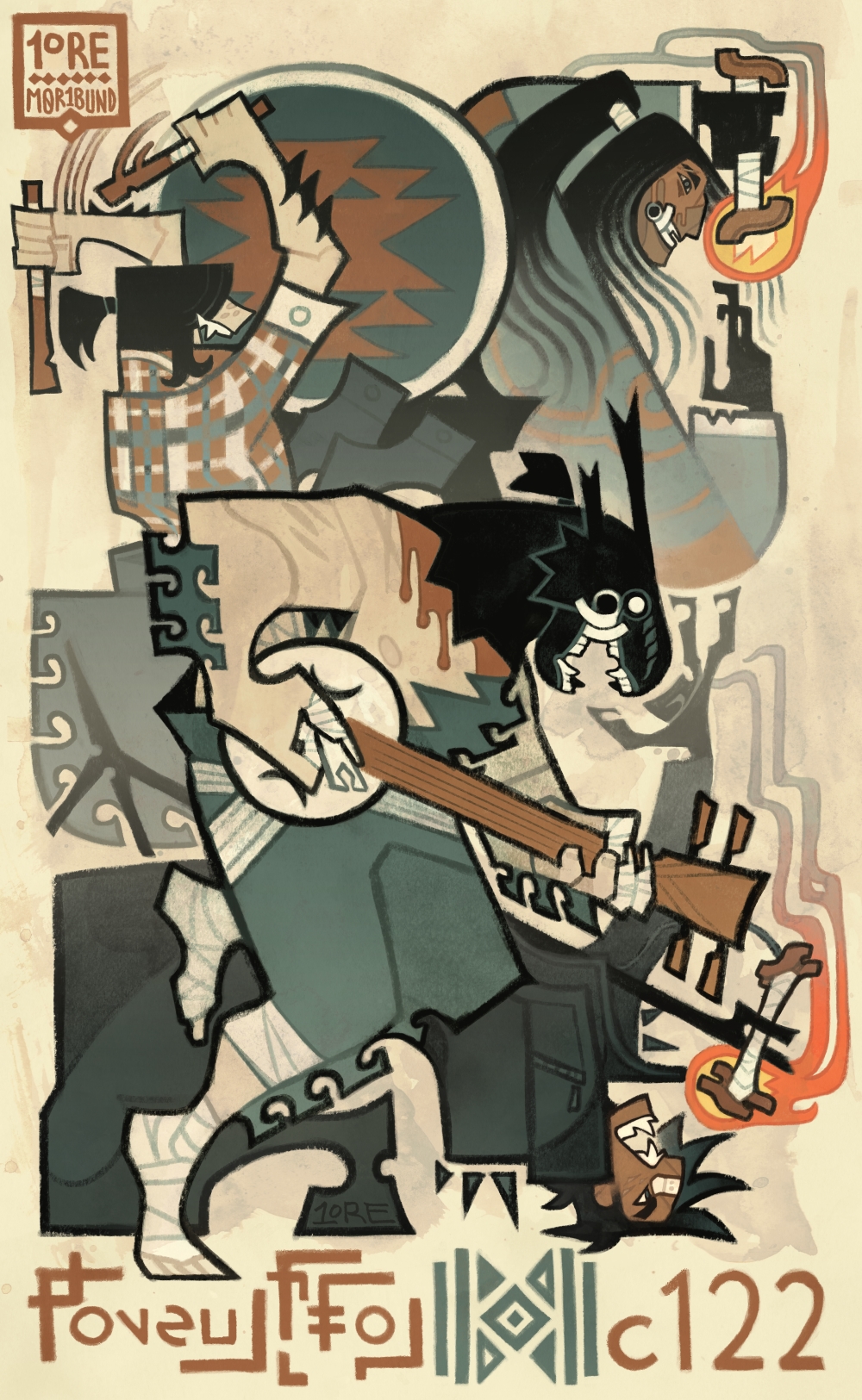 [Long Description: A poster from the Canyon F/Hall Music Festival, held annually in North Mountain. It depicts a frantic collaborative performance featuring the old folk heroes, Dai Hei and Sadren, and some members of the younger generation, Brun Nakamura and Sinuk Vauntariaq.

Hei shreds on a ruan-like instrument in the foreground. He’s shirtless, showing off a bare chest that’s almost as brawny as it is fuzzy. It seems like they got him to wear pants for this performance, at least. He also wears a traditional mask styled after a boondog, an animal that’s sort of like a cross between a dog and a mandrill. The mask is burnt black and snarling, with a chipped ear and missing fangs.

Sinuk is on her knees in the middle ground. She’s a scrappy, lanky woman with cropped black hair and an aquiline nose. All across her face are shrapnel and acne scars. She bends backwards so far that her head touches the stage floor, belting into the microphone that she’s brought down with her.

Brun whales on a taiko drum in the background. She’s short and stocky, wearing a flannel t-shirt with a huge leather coat tied around her waist. Her eyes are covered by her black bangs, and she wears her short hair up in a shitty little ponytail. She’s having a great time.

Sadren is in the background, behind the drum. He’s a tall, gangly man with a gaunt profile and very long black hair, which he wears in a high ponytail. The upper half of his face is covered with red paint, and he wears a sooty grey and red shawl. He holds a mic vertically, not unlike the hilt of a sword, and backs up Sinuk as her fellow vocalist.]

Back to our scheduled Moribund programming…

I recently saw Coldplay in concert again (again) and decided it was time to revisit the piece I made back in 2017, when I first saw them perform live. That was so long ago that Sinuk and Brun weren’t even the main characters of Mercasor yet. But 2017 was also only two minutes ago, you know??

Anyway. Goofy band poster. This didn’t turn out the way I wanted it to at all, but whatever. Hei and Sadren are like old heroes of myth, so it’s very fun to throw them at the resident babies and have them do anachronisms together. When the time comes for Sinuk to ask “COLLAB BRO???” of /course/ they say yes.

I also made a signed version of this, because of course I did. 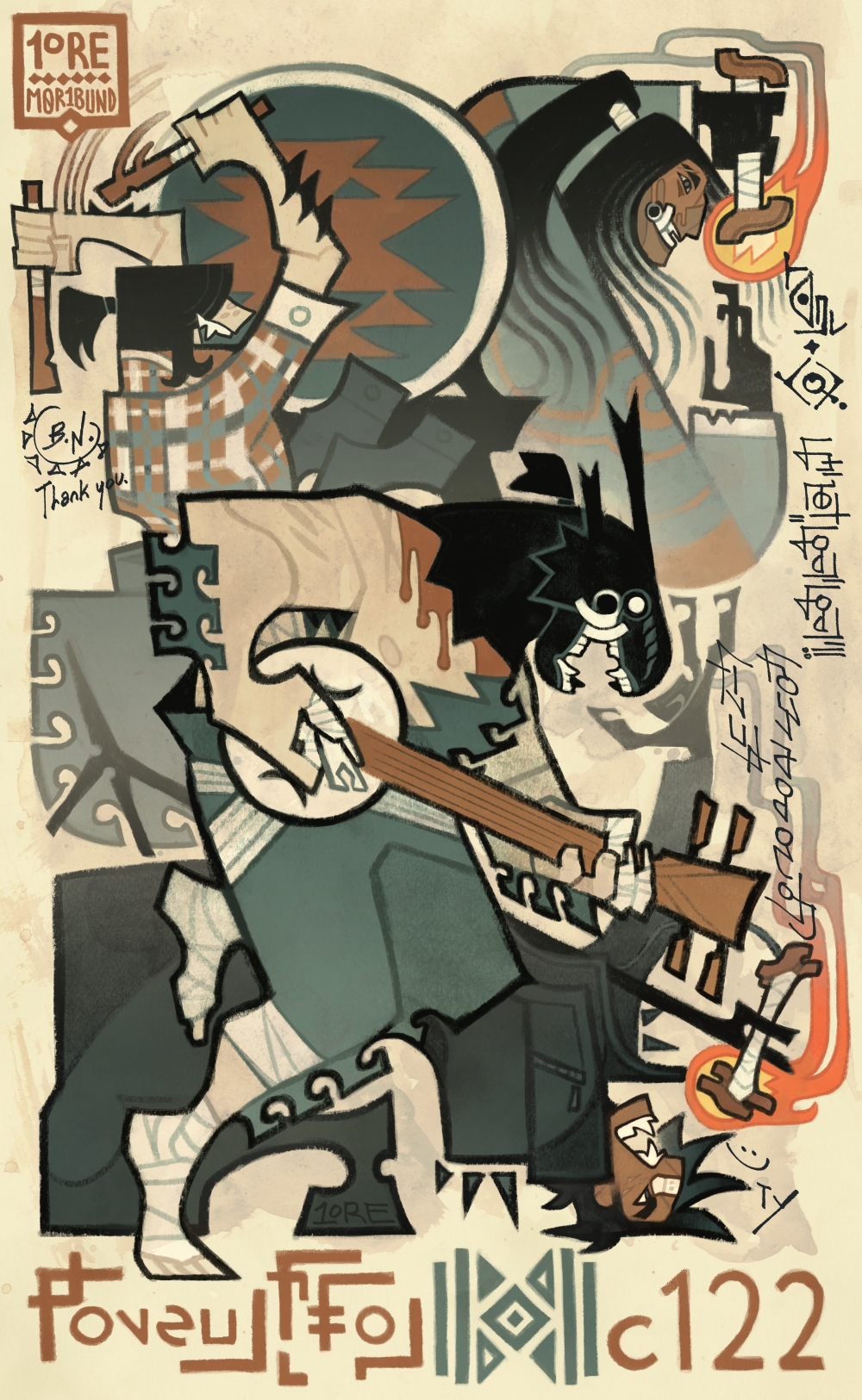 [Long Description: The same poster, but signed by the musicians. Sinuk signs her name in Satik at a sloppy angle. She draws a smiley face next to her likeness, and writes “TY :)”. Brun signs her initials in Aexis (or English), and encloses them with a sun-like halo. She adds a polite “Thank you.” Dai Hei signs for both himself and Sadren, who is blind. Both of their signatures are written in Satik, but are stylized after eyes. They write “Mu lor, marah marah!!”, which means something like “thank you very very much, my friend!!”]