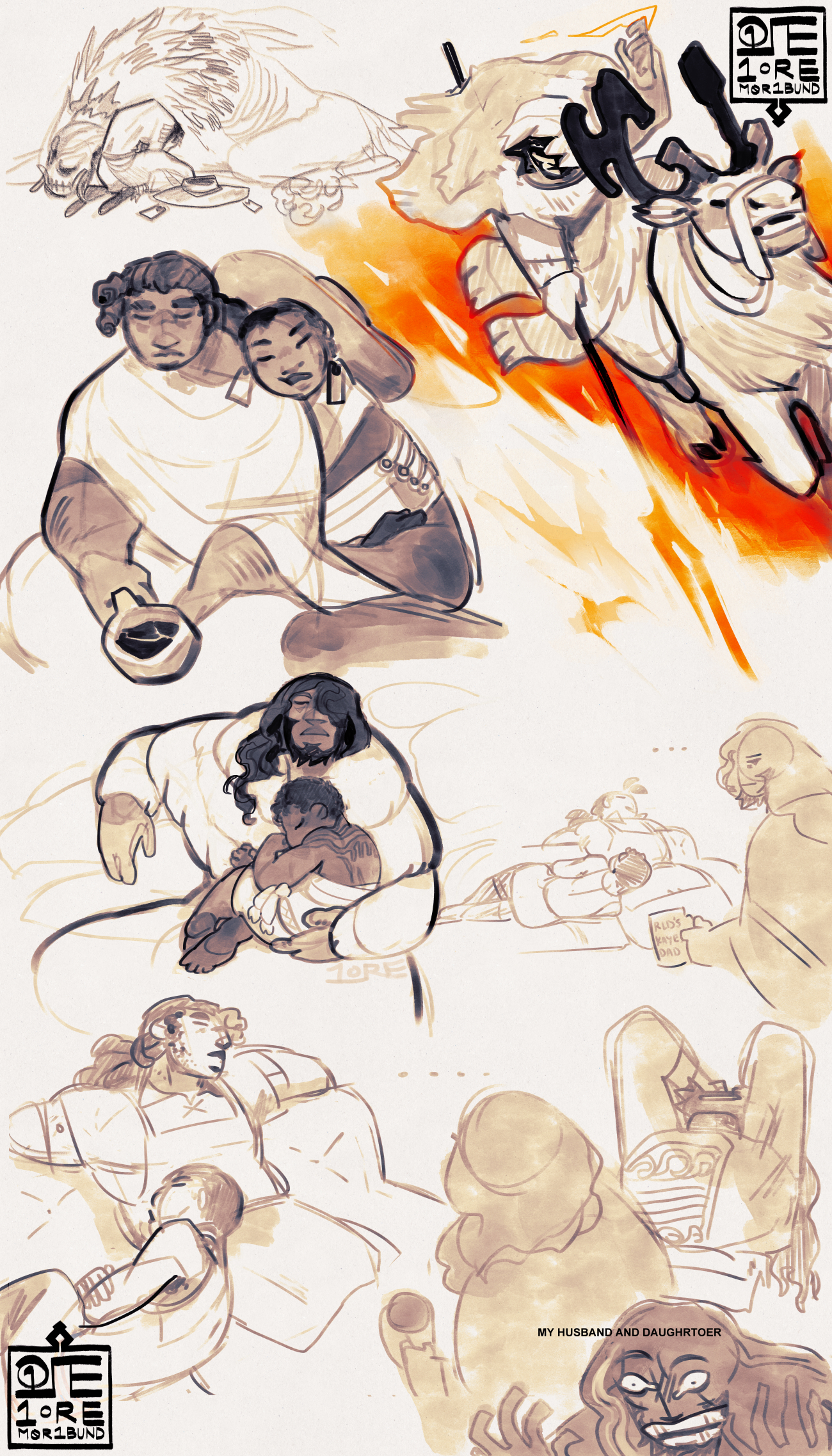 [Long Description: A sketch page of Rayet (Warden of the Free Companies), Ashe (The White Ghost i.e. Area Father Mired in Blood), and Morgan (the blacksmith, among other things.)

In it, Ashe rides the Caribou God at the camera, dragging his spear through the snow and leaving a wall of fire in his wake. Rayet variously naps on her dads, Morgan and Ashe. She’s done a lot of growing up since she was small, but it seems that some habits never change. Ashe feels a particular kind of way about this when he sees her doing it on Morgan.]

It’s been a whole month huh. This semester is kicking my ass, but I found some time to sit down and just doodle for the first time in a while, and now I feel like a human being again. This was nice, too, because I used to use these really chunky brushes to sketch back in 2015... The way that I drew then was more reductive than the kind of sketching that I do nowadays, with lots of erasing to scrape forms and lines out of a sketch. I hadn't even realized I had lost that part of my process when I moved on to different tools.

Been thinking about Ashe and Rayet a lot, and also Morgan. I wrote a little about Ashe and Rayet’s background back in the day (maybe I should write more, or clean this up, hah… feels old.) But I haven’t really gotten around to her and Morgan’s relationship.

Widely considered the better and kinder dad, Rayet really likes him! She thinks he’s the only good thing Ashe has ever done. Morgan has a lot of “outsider” knowledge about what a functional and loving family/society/relationship looks like, which Rayet likes to pick his brain about. Not just for her own emotional well-being, but also as someone who carries an enormous responsibility leading the Free Companies.

Morgan struggles sometimes to recognize that he has something to offer—especially to somebody like her, who appears to have it all together… And who has such a fraught relationship with the man he’s gotten so close to. But Rayet isn’t about to let Ashe get away with fooling one of the few genuinely pleasant and well-meaning men in the ash tundra. The two have a lot to talk about in the way of “the man we mutually have/had a close relationship with is impossible to reconcile with the monster that he is to the rest of the world.”

Sometimes a family is the White Ghost of the Eternal Storm, the daughter of the man he murdered, and, like, the local blacksmith, I guess.