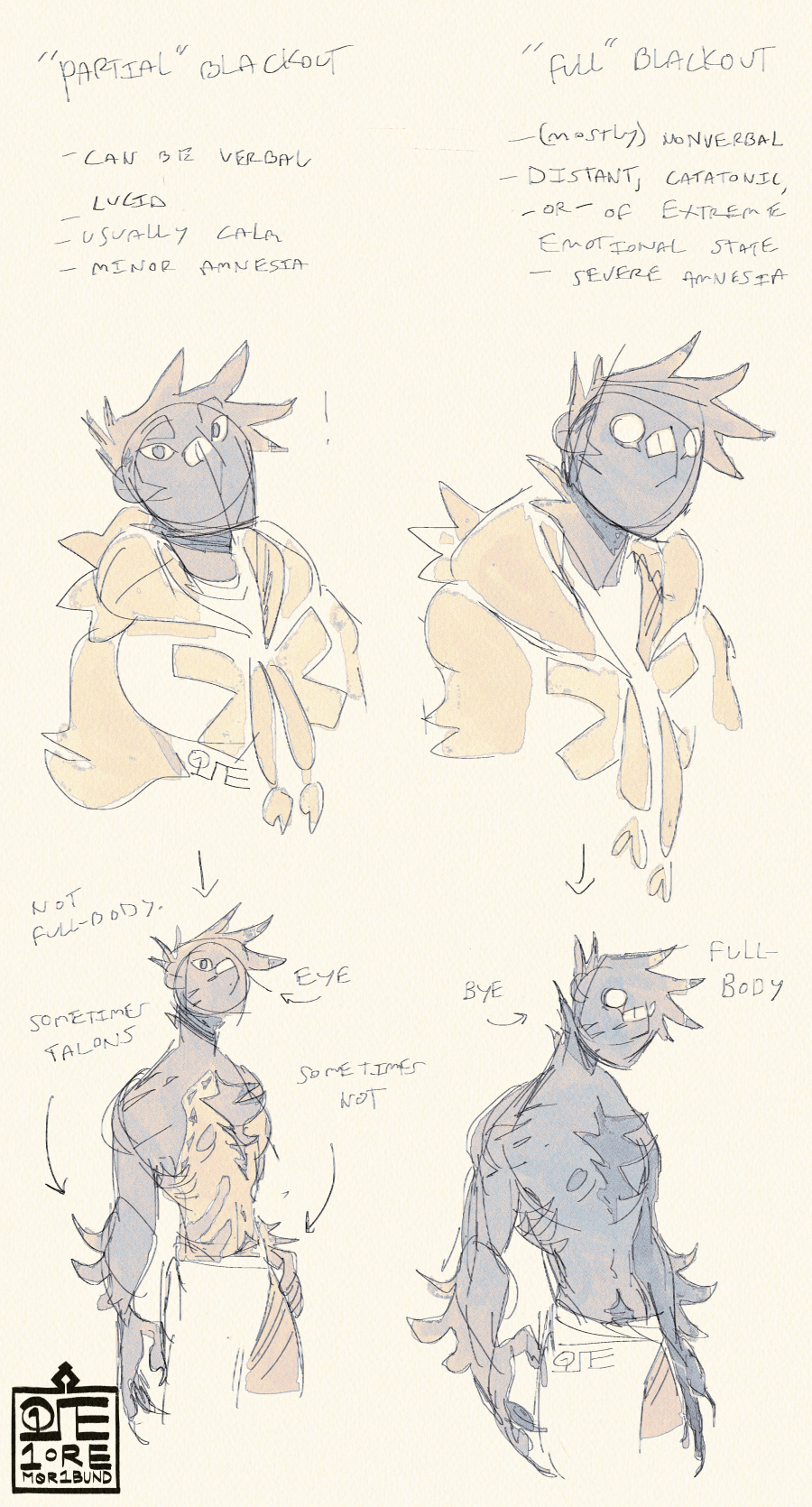 [Long Description: A quick sketch page of Sinuk, in the form of a chart. It compares the nature of a “partial” blackout and a “full” blackout. In a partial blackout, only part of her body is subsumed by the void-inkblot-nonthing centered around her right arm and shoulder. The notes read:

In a total blackout, Sinuk is silhouetted completely, eyes a pupil-less void. The notes read:

Sinuk fell into a black hole. This is an act that is totally survivable in Moribund, if not for the fact that she was mortally wounded on the way in and really should not have survived. But Sinuk is the kind of woman who will find a way to write herself back into the story, even when she’s been written out of it. In the act of doing that, though, she came back Different.

Her right shoulder was where she was injured, due to Reasons related to her falling into a black hole in the first place. Because of all that, her right arm and shoulder no longer exist. They’re kind of the locus of her “situation,” a phantom memory of having a limb there, or maybe the intimation of something that Did exist and Does exist but Doesn’t exist and Never existed. Describing an act of violence committed against the very fabric of reality sends you into weird metaphors like that, but hopefully that makes some sense. A traumatic injury to mind-body-spirit made manifest, more or less.

So because of that, Sinuk “blacks out” sometimes. It’s like a forgetting of the self. The inkblot on reality that is her arm/shoulder starts to overtake the rest of her body, and she loses her footing in the real world. People around her forget she exists, she forgets what she’s doing, where she is, what her name is, picks an arbitrary direction 9 degrees north of south and starts walking… it’s a whole thing.

It’s hard to pinpoint a single cause for this, but it can be innocuous, like “touched something with a bad texture while doing the dishes so I blacked out” or “laughed so hard I blacked out” or “stayed up too late got weird and blacked out.” It can also be a trauma response, sort of like a panic attack, flashback, or a moment of dissociation. More often than not, it just happens and she just gets to deal with that!

Partial blackouts are very manageable. She sometimes purposefully induces them, because being a walking hole in reality can be very useful. It’s a precarious state for her, though, because it’s easy to slip into a full-body blackout. That can be a scary place to be in for her and everyone around her—not because she’s a danger to others or anything like that (though being a walking black hole does give you some, err, alarming abilities) but because it can be dangerous for her.

Sinuk can’t do a lot about that when it happens, it’s all a blur to her. She’s lucky to have a small support system of people that remember who she is, even when the rest of the world forgets her. Usually she responds well to their efforts to ground her, but sometimes she doesn’t. Sometimes it just passes when it passes. Mostly she needs people to keep an eye on her, so she doesn’t do something weird like eat 16 prickly pear tunas in a row and wake up with a killer stomach ache. Or try to walk back into the black hole what unmade her ):