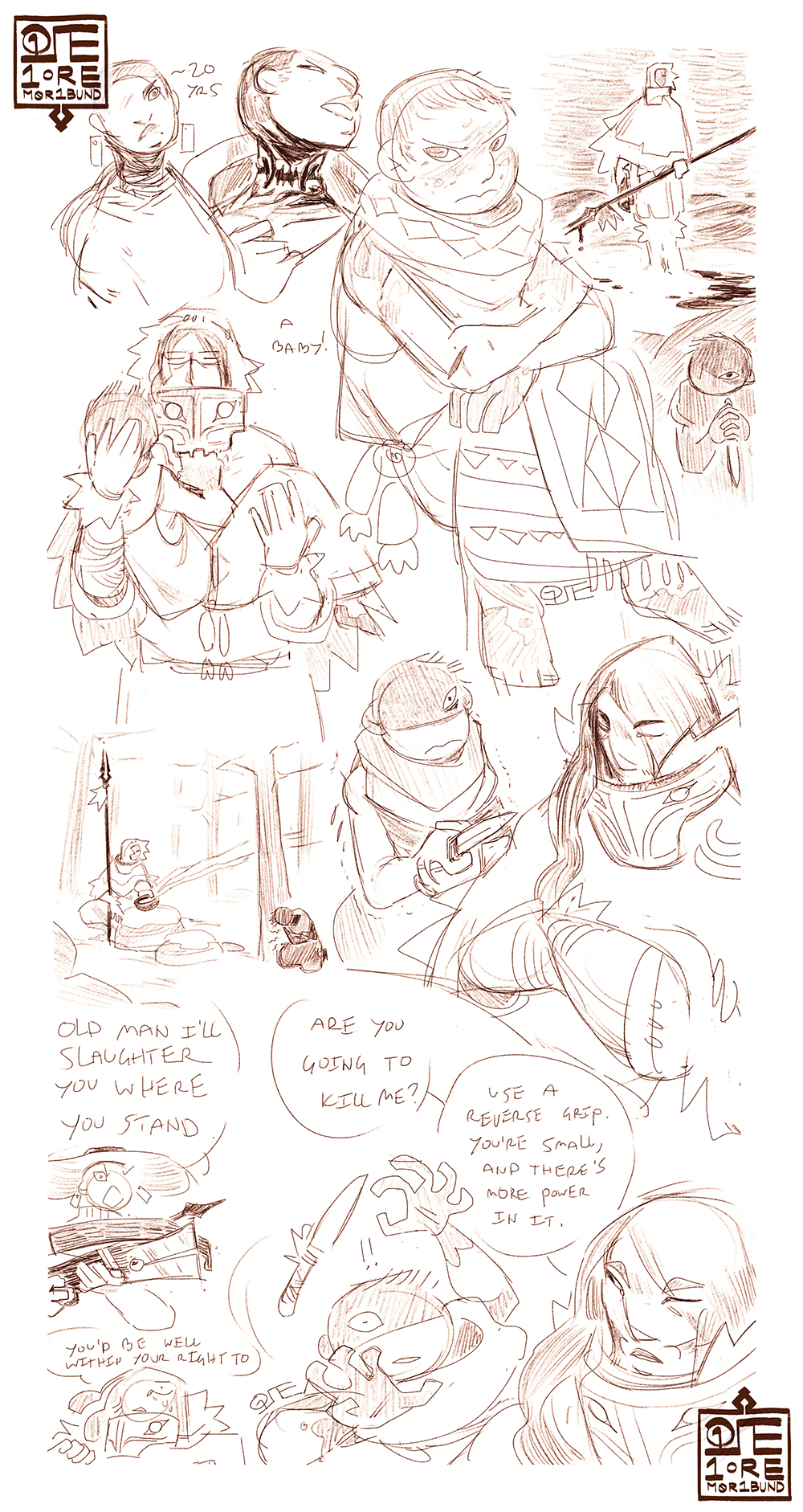 [Long Description: A sketch page of Rayet, leader of the Free Companies of the Ash Tundra. Most are doodles of her in her wee years-- a tiny, soot-stained orphan with a thirst for revenge. The object of her ire is the White Ghost, Ashe. Unfortunately, he seems to have taken a shine to her in various vignettes;

Unsurprisingly, my recent bout with Pathologic has made me turn my eye back on Basedt and resident sad dads Ashe and Prisoner. I have... many words, and many ideas.

A quick foreword: I don't talk about Basedt or its story very much, so this is a good opportunity to re-introduce it. The city Basedt is the last bastion of civilization within the ash tundra, a region isolated from the outside world by a hateful, eternal storm that has raged for 100 years and change. Some consider these to be the end times. For others, this is a strange, new normal. Most are just trying to live to see another day.

Ashe is the White Ghost of the ash tundra. He was once part of an endtimes cult, who consider the eternal storm to be a thing so terrible, so terminal, that expediting the end of the world must be the only humane way out. During this time, he became a butcher and a monster, so atrocious that some consider him the mythical “great beast of all men.”

He later exited the cult, and turned the killing edge of his spear on his former colleagues. He now does everything in his power to sabotage their efforts. But that doesn't really mean anything to the folks at Basedt; As they hide from the horrors of the outside world behind their holy walls, they are completely ignorant to the peril they're in. Ashe's change of heart is meaningless to them, and so he remains the White Ghost--- friend to no one, foe to all, wandering the ash tundra alone.

Rayet, on the other hand, is the leader of the Free Companies of the Ash Tundra. They're a ragtag patrol of sauntiaq, who serve and protect one another as they seek sanctuary at Basedt.

It's not well-understood just who or what sauntiaq are. Most consider them to be Things That Should Not Be; dead bodies that walk the earth without souls, hungry ghosts that possess those who die in the ash tundra, or impossible machines given motion by the hatred and cruelty of the ash tundra. What is understood is that death is no escape, out there.

It's common knowledge, too, that all sauntiaq share an endless, gnawing hunger. In a silent tundra where the earth is so spiteful that it supports no food or game, most sauntiaq do not survive, returning instead to the state of catatonia they were born from. This is a source of intense fear for most sauntiaq, who may remember what it feels like to be caught in the twain of life and death, forever.

This hunger, coupled with fear and superstition, has caused the city Basedt to close its doors on all sauntiaq. And so they are given a terrible ultimatum: all food flows outward from Basedt. All sauntiaq must either conceal their condition and hide among Basedtis, or resort to theft and murder out on the ash tundra.

In the past, most sauntiaq have been forced to live a hard and lonely existence. But Rayet has managed to rally a majority under her banner. She may now begin organizing the change she wants to see for her fellows, and has become a rare pillar of safety and security in the ash tundra. For this, she is deeply respected by those who live outside of Basedt's walls.

But Rayet's history is clouded in mystery. She is young to be a creature of such violence and experience. This is the subject of wild speculation on behalf of her comrades, for the woman never comments on the matter, herself.

I am thinking now that Rayet learned from the best, and learned young.

Ashe has ways of walking into the wreckage of his past, try as he might to avoid it. Perhaps Rayet's father was a monk with Basedt's wall watch, hunting the White Ghost across the tundra; perhaps Ashe, deep in his sickness, deliberately stole him from her; perhaps he was simply in the wrong place at the wrong time, and crossed paths with a truly desperate man.

Either way, little Rayet snuck into the woods that night, following her father out of Basedt and into his grave. Ashe unknowingly gained a traveling companion the following morning-- A soot-stained orphan, ghosting him from afar