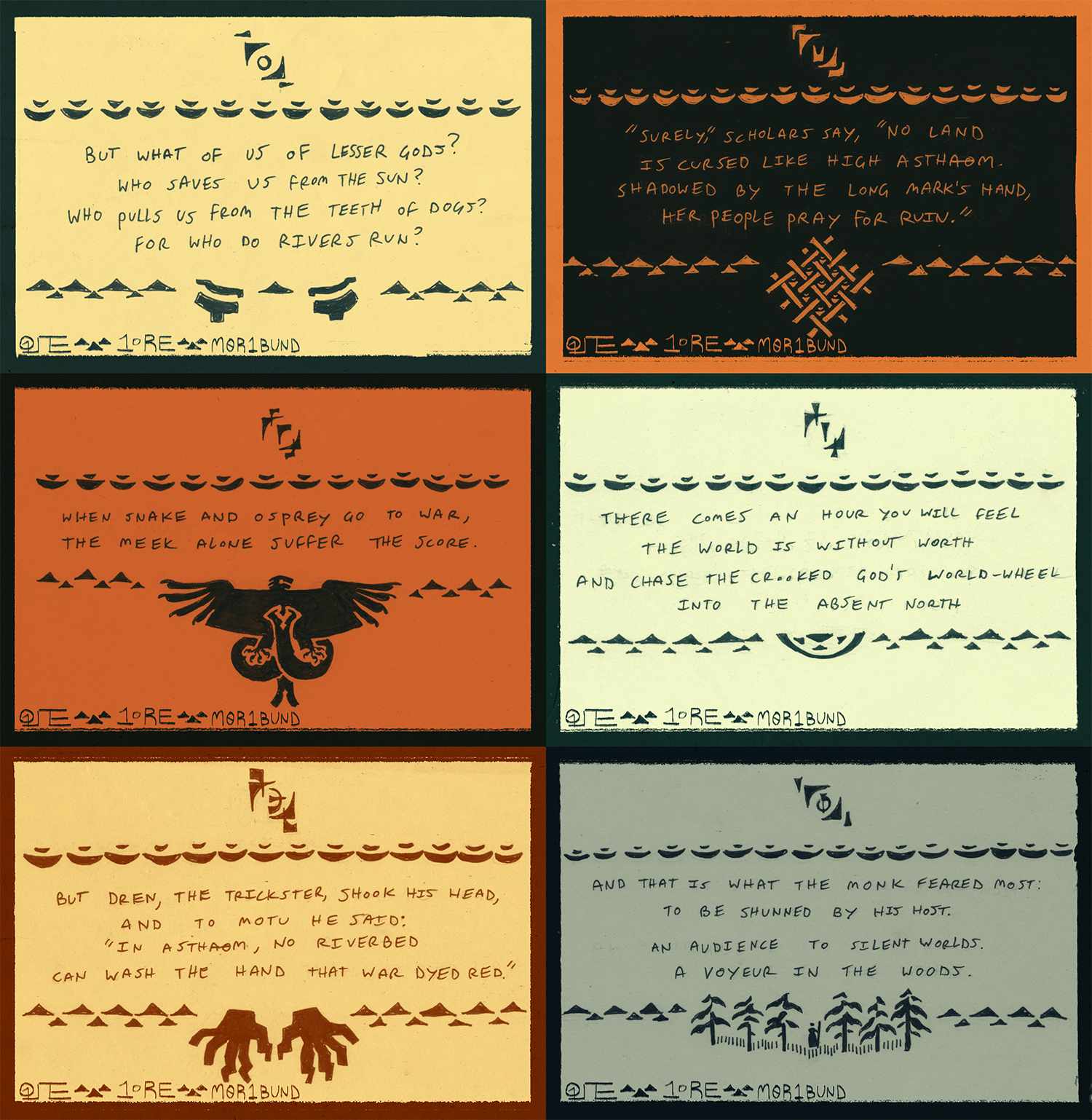 For the month of December, I thought it would be good for me to write a small poem every day. Every six days I’ll compile what I’ve got, with transcriptions and footnotes. I’m calling it Decemverse until I think of something better.

I used to write verse prolifically in highschool (a low place for my mental health) but I stopped some time after graduation, when things improved. Very silly, because I always pictured Moribund as a Brian Jacques-esque read when it comes to hymn, song, and poetry-- which is to say, there are a lot of them!

[The Satik letter for “AH”]

But what of us of lesser gods?
Who saves us from the sun?
Who pulls us from the teeth of dogs?
For who do rivers run?

“us of lesser gods” is a phrase that impressed on me from Flogging Molly's song of the same name, so technically, this is transformative.

Asthaom has a difficult relationship with the sun, which can be brutal in the summer months. Doubly so for Scaiuq, where shade is shelter and obscurity means safety from those that would hurt you. I imagine Len is posing Motu a rhetorical question here; Who looks out for exiles such as the Sentinels? If they are godless, where does their fortune come from?

“Surely,” Scholars say, “No land
is cursed like high Asthaom.
Shadowed by the long mark's hand,
her people pray for ruin.”

[Symbol of the Temple / Koda.]

The long mark's hand is an epithet for the storm bird Morrigan, who's appearances always predate disaster. In antiquity Asthaom was viewed as an inhospitable and lawless wasteland, a look that didn't age especially well on behalf of the global theatre.

[The Satik letter for “EH”]

When snake and osprey go to war,
the meek alone suffer the score.

[The snake locked in deadly throes with the osprey.]

The world-wheel is a concept in Asthsondic faith describing a cyclical universe and natural world, and also a cyclical human history. The Absent North is the word for the North Star, which doesn't exist in Moribund. There is in fact an East, West, and South star, but no North. “Going into the absent north” is therefore a phrase akin to “losing your marbles.”

The crooked god here could mean Sadren, who quite upset the world-wheel back in his day.

[The Satik letter for “EE”]

But Dren, the trickster, shook his head,
and to Motu he said:
“In Asthaom, no riverbed
can wash the hand that war dyed red.”

Dren is a diminutive of Sadren. This is just a fun a fable about the “blood-water” of the river Roan; Nobody intended for it to be red, it's usually just a result of turbidity, the color of the rock underneath the water, or the trace amounts of god's blood flowing through it.

[The Satik letter for “OH”]

And that is what the monk feared most:
To be shunned by his host.
An audience to silent worlds.
A voyeur in the woods.

[Makame in the woods.]

He hears it enough from Basedt as it is.