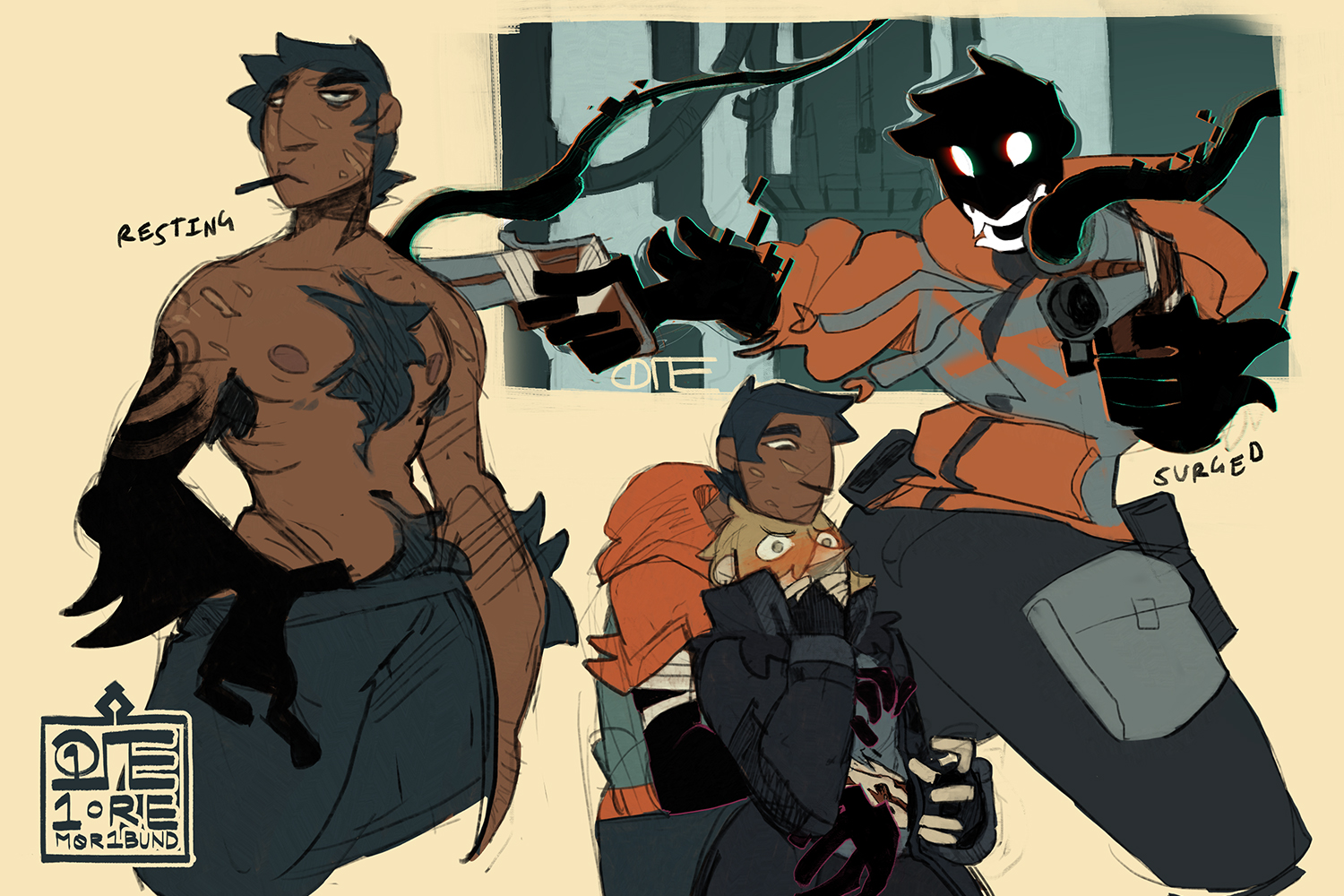 [Long Description: A sheet of early Sinuks, showing the particulars of her being a hole on reality.]

And an old sheet for Sinuk. Things have changed, but the spirit is the same.

This came with a write-up about Sinuk's relationship with "the void," back when I was still workshopping the concept. A lot has changed, but in the spirit of archiving, I've enclosed that below;

During her time spent stranded outside of reality, Sinuk formed a connection with the void as something at once apart and a part of herself. She is changed considerably by her experiences, and comes back quite literally marked by them.

Lucky for her, she’s a resourceful one. Even if she reaches into herself for magic and finds that she’s changed, there’s utility in being a hole in reality.

I have a lot of very long feelings about Sinuk’s arc, but I think laying down some mechanics first would be more prudent, because I feel more solid about that than about Sinuk’s whole story.

Sinuk’s connection with the void bends more than a few waves on the visible spectrum. Those parts of her are completely light swallowing, and leave imprints on an unaccustomed viewer’s vision not unlike glancing at the sun. The effect causes no permanent damage, however, and subsides as eyes adjust or remain unexposed for a short while.

If she’s drawing on the void too strongly (e.g. surging) or too weakly (e.g. fatigue, severe injury), the cost reflects on her form in varying severities, such as purple fringing / chromatic aberration, mild gravitational lensing, or displaced / disjointed imaging, in order of intensity.

The void’s quality of shape, texture, and temperature are more or less adherent to Sinuk’s, but are difficult to actually perceive. She may at once feel both hot and cold to the touch, numbing, or altogether indistinguishable from her surroundings. Although she is constant in shape, the voided parts of Sinuk can “clip” with others’ bodies and pass through them to no ill effects (a useful trick in mending magic.) The sensation is painless, but utterly wrong-feeling.

Sinuk does not speak when surged– the entire experience is a blur for her, and although she understands what is spoken to her, controlling her voice and stringing words together requires intense concentration on her part. The few noises she does make are hers, but are subject to various aural distortions the less she is concentrating. Under extreme duress, her voice abstracts into something else entirely.

Sinuk ultimately is still drawing magic from herself, it is simply filtered through her experiences. My concept of “the void” here is therefore pretty loose and not really separate of her; whether or how it’s connected to Wildstar’s void is a good question I’ll get back to you about. Don’t think too hard about the implications of gravitational lensing on somebody standing 3 feet from you, by the by!